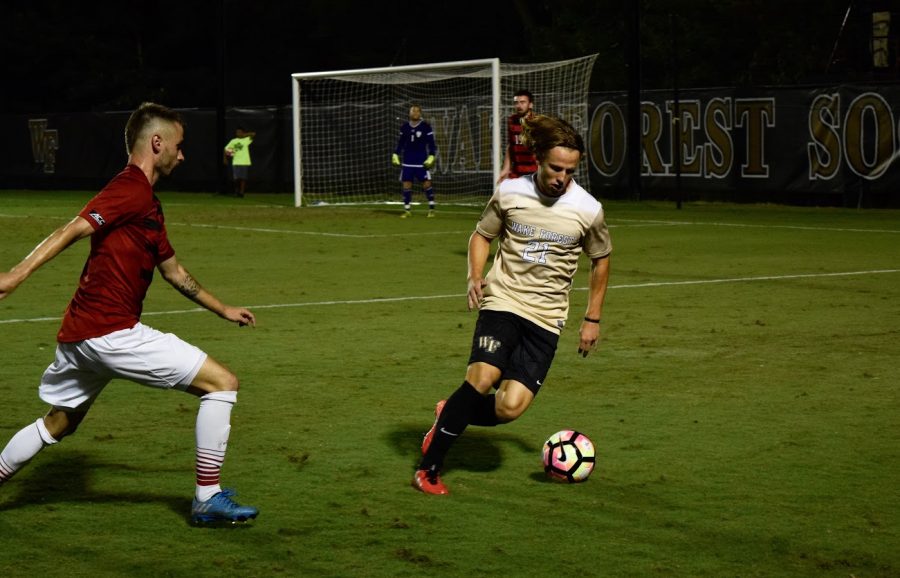 This week, the No. 8 Wake Forest men’s soccer team secures two more wins to improve to 8-1-1 on the season.

On Saturday, Sept. 24, the Demon Decons shut out the NC State Wolfpack at Spry Stadium. The match ended in a 1-0 victory with a game winning goal from senior Jacori Hayes.

The defense put up a strong fight, continuing their shutout streak to seven games.

While the Wolfpack had some strong opportunities at the end of the second half, they could not get the ball past Alec Farrell, who made four important saves.

On Tuesday, Sept. 27, the Deacs traveled to Davidson to earn another win. The Wildcats could not stop Jacori Hayes in the second half, who got on the board in the 68th minute with a goal and assisted Hank Gauger’s game winner in the 75th minute. This was Gauger’s first goal of the season.

“I think the team came out strong tonight and kept the ball pretty well,” said sophomore defender Sam Raben. “We knew Davidson wasn’t a team to be taken lightly, and everyone did what they were supposed to do.”

The team looked to extend their shutout streak to eight straight games but were unable to do so with Davidson’s 88th minute goal.

“Mid-week games can be tricky, and the boys just went out and got the job done,” said junior forward Jon Bakero. “Now we just need to focus on Friday, because obviously it will be a really hard game on the road.”

The Demon Decons will travel to South Carolina on Friday to take on the No. 5 Clemson Tigers. Their 6-1-1 record will make it a tough game for Wake Forest.

“Getting a win against Clemson will be the only thing on our mind until Friday,” said Raben.