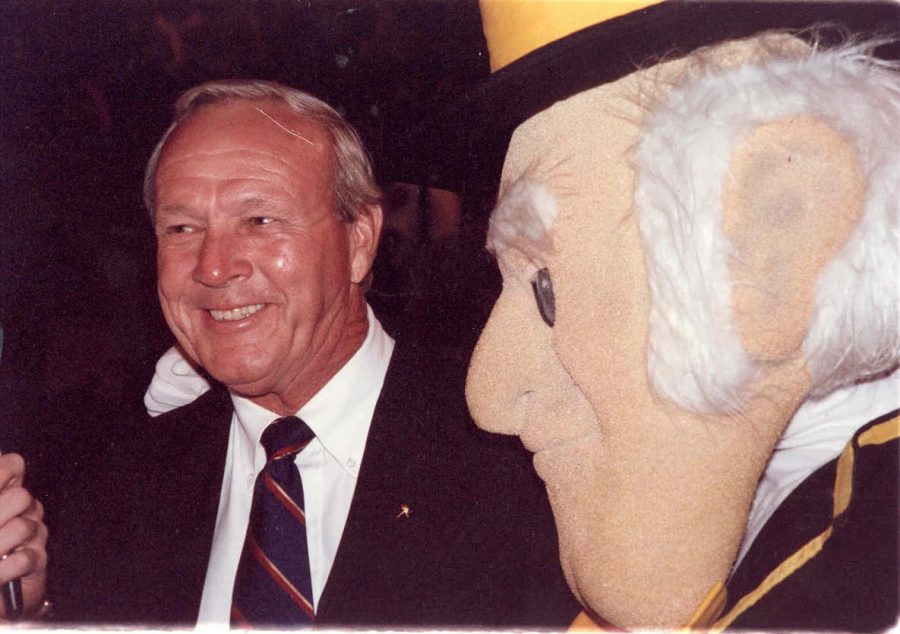 The current men’s golf team share their reflections on “The King” and how he has shaped their lives.

Mr. Palmer’s charisma, kindness and philanthropic attitude shine bright with his passing. Without ever having met “The King”, he has given me a campus and facility to grow and improve both as a golfer and as a young man. I am reminded every day of his values of patriotism, work ethic and excellence as I walk past his statue. The facilities we practice on, the dorms we live in and the grounds of this campus are all due to his generosity. There is not a single human being who has had or will have such a massive impact on a school and a program as Mr. Palmer has on Wake Forest. His lasting legacy will always leave a mark, something this team will carry with it for many years to come. Though he may be gone, he certainly will never be forgotten and will always hold a special place in the history, present and future of our Mother So Dear, Wake Forest University.

“I’ve always made a total effort, even when the odds seemed entirely against me. I never quit trying; I never felt that I didn’t have a chance to win.” – Arnold Palmer.

No golfer will ever leave a legacy greater than that of Mr. Palmer in the world of golf and at the Wake Forest. Like Lee, I was never able to meet “The King”, but he has left us many things that are unattainable anywhere else. Coming from a family that was not able to afford a membership at a country club, Mr. Palmer gave me a practice facility that I am able to use on any occasion. It gave me a place where I feel like I belong. That being said, more importantly, “The King”, gave me a campus with a deep history and tradition, as well as opportunities to grow as a person. Every day I walk past his statue and I am reminded of the opportunities that Mr. Palmer has given to me. He gives me a reason to give it my all, for golf or anything else, and to try to live life as he did. Because of Mr. Palmer, it is an honor to be on the Wake Forest golf team, and may he rest in peace.

Mr. Palmer transcended the game of golf not only because of his ability to play the game but the way he treated those around him. While I only had the pleasure of meeting Mr. Palmer briefly at the unveiling of his statue during my freshman year, I was able to see why he was beloved by the entire golf community. He took time to shake hands with every individual that approached him and genuinely cared about the conversations he was having. He stood and signed autographs for an hour after the ceremony, and I noticed that he did not once rush a signature and each one was legible. During my brief conversation with him I immediately knew how much love he had not only for Wake Forest golf, but for the entirety of Wake Forest University. He truly loved being a Demon Deacon and embraced the spirit of Pro Humanitate. We as a golf program and a school are forever indebted to him, and he will always remain a part of Wake Forest University.

Though my personal connection with Mr. Palmer was minimal, stretching no further than a simple handshake, his influence as both a player and a leader in the game of golf has had a powerful effect on me. I speak for many others, both players and fans, that never really met him but feel an association that is purely indescribable. That alone is enough to epitomize greatness. To validate this point, students paid homage immediately after the news by visiting his statue outside our practice center. This unified and touched my team and me in a way that we had never felt before. This is the embodiment and breadth of his influence. This memorialization made it so real for us as a team, but intensified his legacy as a true legend in the game of golf. To say he is the biggest influence on the game fails to highlight his true importance. He touched so many including myself. He was heralded not only as a player but also as an ambassador and personality. This is why he is “The King” — his reaches go far past the golf course. His legacy lives on and this is why so many, including my teammates and I, hold him in such high regard.

From the day I touched a golf club, I was infatuated with everything Mr. Palmer. The first memory I have of Arnold Palmer is from kindergarten when I received an assignment in which I had to choose who I would put on the dollar bill. Of course, I chose “The King”, Mr. Palmer. The assignment required me to write a sentence or two saying why I chose the individual and I replied, “I chose Arnold Palmer because he is a great American. The dollar bill will also be green because a golf course is green.”

Thinking it was unbelievable that a six-year-old could think of Arnie in this regard, my father decided to ship the note to Mr. Palmer himself. Assuming that there was no way I would get a response, we quickly forgot about the assignment. However, no more than two weeks later, there was a letter addressed directly to me from Arnold Palmer of Latrobe, PA. Not only did he write me back, but he wrote what looked to be a novel on how much this had meant to him. I believe this story shows just who he was as a man and not just as a celebrity. Throughout all of his success, he was able to stay unbelievably grounded. From that day on I knew I wanted to attend Wake Forest and play golf just as Arnie once did. Rest in peace to “The King” of so much more than just golf. He surely will be missed.

Since I can remember, Mr. Palmer has always been an idol of mine. Not only do I idolize his great talent for golf, but more importantly his character, honor, courage and respect to others are what stand out to me the most. After watching all the tributes to him over these past couple days, I am truly amazed that through all his time in the spotlight, he has managed to live with such class going about life with the motto, “treat people how you want to be treated.”

As I walk past the Arnold Palmer statue everyday to practice, I realize how honored I am to attend the place Arnold Palmer called home. Mr. Palmer has had such a significant impact on the golf program at Wake Forest and the university as a whole. Words cannot describe how much he meant to me and the people I surround myself with. I speak for everyone when I say you will truly be missed, Mr. Palmer. Go Deacs.

Though I never met Mr. Palmer, I feel that I knew him through those that he touched and through everything that he did for the game of golf. My only personal connection to him was a letter he sent me after my commitment to play here at Wake Forest. I will never forget how I felt when I opened the envelope and saw his signature on the bottom of the page. This is a true example of his genuine care for others and never-ending desire to impact the world of golf in a way that only “The King” himself could. There has never been and never will be another leader like him for golf and each of us on the team owe the opportunity to attend Wake Forest to him. His greatness will never be forgotten and I am sure I will not be the only one to use him as an example to follow throughout all parts my life. His work ethic, personality, patriotism and true love for others are things that most of us can only dream to emulate.

Mr. Palmer lived life to the fullest.  He was a military man, a legend in the golf world, but most importantly, he was a role model for the world.  Mr. Palmer was an incredible human being, and it was a privilege to spend time with him on the phone and exchange letters with him throughout my career.  He encouraged me through some struggles in my game, and he encouraged me through the brighter moments.  Anytime I won a tournament, I got a congratulatory letter from Mr. Palmer due to being on his scholarship.  No trophy will ever come close in value, in my opinion, than the congratulatory notes he sent me.

All of his stories that he shared with me had life lessons.  The lessons of how to carry myself as a true gentleman are lessons that I will pass on.  There is no doubt that his legacy will continue to live on with the lessons that he passed on to the lucky people he touched.  There were many golf lessons involved in our talks, but the things I will value the most will be his lessons about becoming a man. I am forever grateful for the impact Mr. Palmer had on my life.  Thank you, Mr. Palmer. Rest in peace.