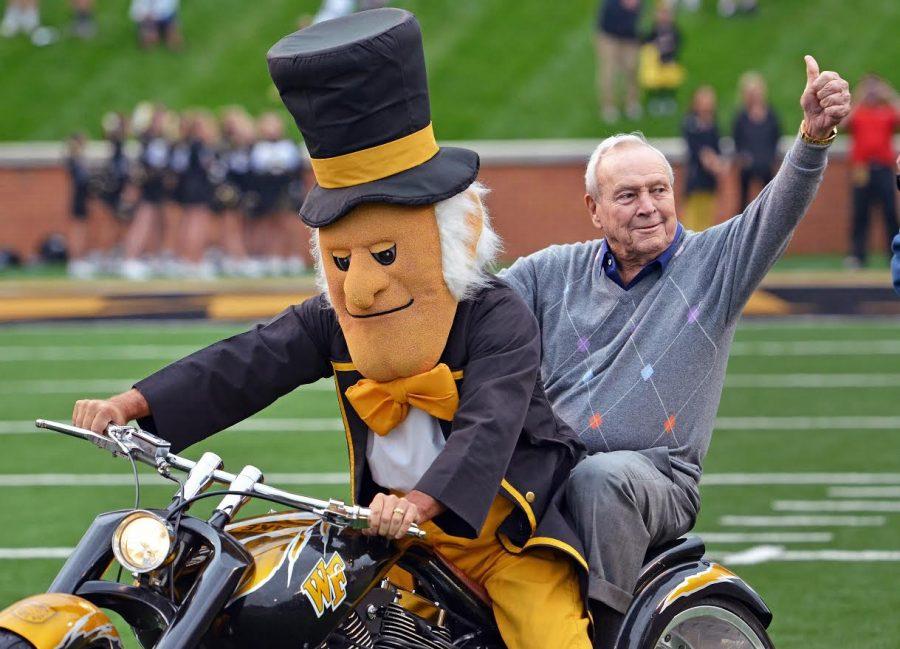 Arnold Palmer was the Demon Deacon everybody in the Wake Forest community should aspire to be.

In January of this year, the Old Gold & Black celebrated the first issue of its centennial volume, and as a result, vowed to recognize some of the most impactful Demon Deacons in the world of sports over the past 100 years.

Little did we know when making this promise nine months ago that we would be saying goodbye to the Wake Forest legend and global icon, Arnold Palmer.

When Wake Forest men’s head golf coach Jerry Haas receives recruits at Wake Forest, he makes sure they understand one thing regarding Wake Forest’s reverence for its most famous alumni.

“There is only one statue on this campus, and its of Arnold Palmer,” Haas said.

It’s a simple fact that encapsulates an absolute truth: Palmer was Wake Forest. A boy from Latrobe, Pennsylvania, who arrived at a small, regional Baptist University by chance, became the face of everything Wake Forest University embodies.

Yes, Palmer was a historically great athlete, but he was so much more to so many people. Not only did he completely change the game of golf with his unbelievable personality and business sense, but he cared for everyone he came in contact with.

It’s hard to quantify with words just how much this man, endearingly known as “The King,” meant to so many different people. He embraced fans, competitors and all individuals alike; he strove to make a lasting impact on the world and everyone in it.

He will long be remembered for the drink named after him and for his incredible golf career. His soft, pleasant smile and his incredibly kind nature will never forgotten. Long called golf’s greatest ambassador, Palmer became Wake Forest’s greatest ambassador. Palmer was a man beloved beyond the golf course, truly taking Wake Forest’s motto “Pro Humanitate” with him everywhere he went. His selflessness and ability to make each individual with whom he interacted feel most important truly exemplified his true persona.

The OGB has celebrated his career over multiple decades, covering each of his seven Major championship victories, as well as his many achievements and accolades, which include but are not limited to his recognition as Sports Illustrated Sportsman of the Year (1960), his World of Golf Hall of Fame induction (1974), his PGA Tour Lifetime Achievement Award (1998), his achievement of the Presidential Medal of Freedom (2004) and the Congressional Gold Medal (2009).

Each of his honors and achievements have given the OGB incredible opportunities to celebrate the successes of a former Demon Deacon at the top of their profession.

Arguably, one of the greatest recent memories Wake Forest fans have of Palmer was his participation as the honorary captain in the 2007 Orange Bowl. Joining Louisville’s honorary captain, Muhammad Ali, it was a meeting between “The King” and “The Greatest” at midfield for the coin toss.

It is memories such as this that Wake Forest fans will remember, memories that provided great pride for our university.

All of us here at the OGB, past and present, thank Palmer for years of memories and exciting content that gave our weekly publication substance and pride.

Rest in peace to the legend, Arnold Palmer, forever a Demon Deacon.