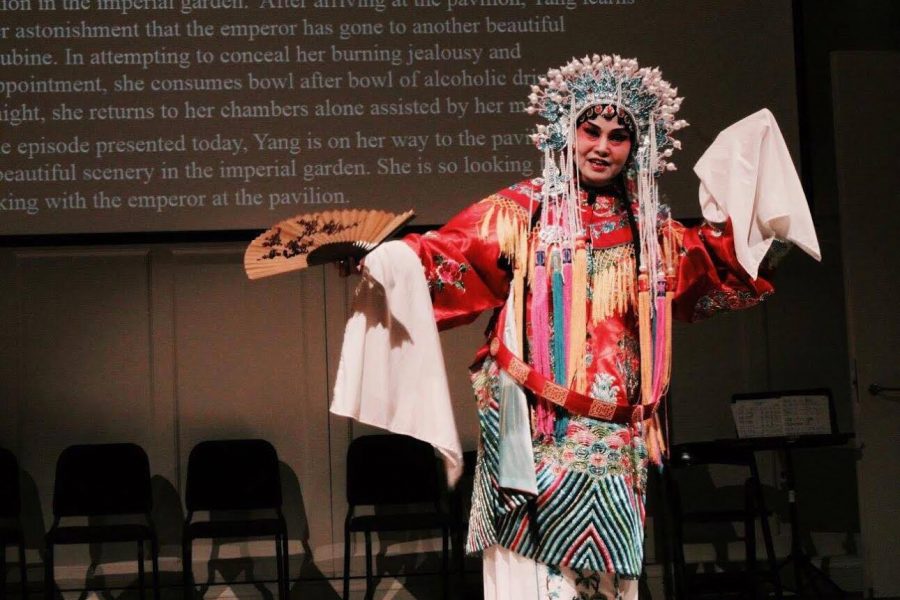 A traditional orchestra and opera performed on campus in the first of several Chinese culture events coming this semester.

Exotic, dynamic and uplifting was how freshman Madeline Katsarelis and her friends described the music.

“It was a very different sound than anything I’ve heard,” Katsarelis said.

The Chinese Instruments Symphony Orchestra featured a mix of traditional Chinese and Western instruments in bow-string, plucked-string and wind sections.  Every so often, the ensemble divided into various duets and solos to highlight the traditional instruments. One was the solo of the Cucurbit flute, whose silky, rich sound manifested a tranquil scene in the piece “Deep in the Bamboo Forest.”

Interspersed among these pieces were performances by three Peking Opera Society members.

“Almost every province or area in China has its own opera. They have their own dialects and then their different styles of opera.  Peking opera is one of them,” said professor Feng Yan Hu of the Department of East Asian Languages and Cultures.  Peking opera, like other Chinese opera styles, is a scenic performance art rooted in music, literature and elaborate face painting.  Most pieces date back to the 18th century.

Hu, who listened to a lot of traditional Chinese music as a child, saw the Peking Opera Society perform with the orchestra at the University of North Carolina Chapel Hill years ago.

“I was very impressed,” Hu recalled.  “I wanted to bring them to Wake Forest, because I thought the people in this community [should have] the opportunity to enjoy them.”

In 2012, she did.  This was Peking Opera Society member, Yongyong Xia’s, first performance.

Xia, returning this year for the two groups’ second Wake Forest appearance, is now a Forsyth County high school student. She was dressed in full traditional Chinese opera costume and hair and makeup, which takes about three hours to complete.

“Hello, cowboy!” Xia chirped in Chinese, the turquoise tassels on her slippers fluttering as she scurried across stage.  Xia played the young village girl in the popular “A Playful Duet on the Countryside.”

“It’s a really beautiful art,” said sophomore Annette Barile, a Chinese minor. “I think Peking opera is such an embedded part of Chinese culture.  Although it’s not something you see all the time, even when you are in China, I think it’s something that helps you understand a deeper root of Chinese culture.”

Barile emceed the evening with sophomore Evan Bigley and senior Yue Feng.  All three students are members of the Chinese studies club, a group of students that develop opportunities outside the classroom for students to more fully integrate themselves in the language and culture. Barile serves as vice president.

“When you’re learning a language, it’s not just about knowing the words. It’s about understanding the culture,” Barile said. “If you want to understand metaphors and idioms and things like that, you have to understand the culture, or else it just seems like a bunch of random words.”

“This year, the Chinese Studies club has shifted its goals to not only host events for students to better understand Chinese language and culture but to also create opportunities where Chinese and American students can interact to form new relationships,” said junior Lucas Wille, club president and Chinese and Business and Enterprise Management double major. “Through events like karaoke competitions, movie nights and topic-focused conversation tables, we hope that students can make lasting friendships that will span borders.”