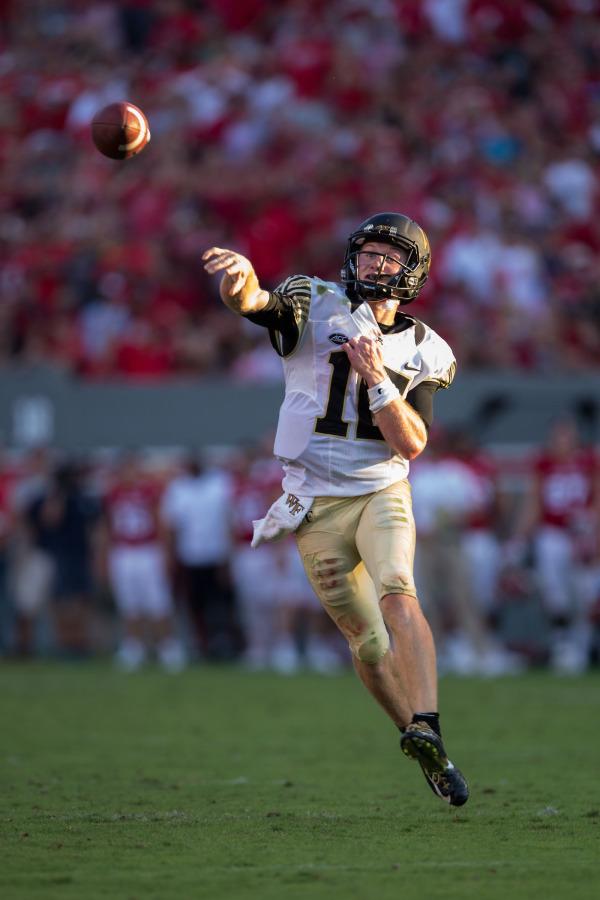 The Demon Deacons fell short for the first time this season against the NC State Wolfpack.

A sluggish defensive start, poor field positioning and a noticeable offensive struggle in the red zone resulted in a 16-33 loss for Wake Forest.

The loss set Wake Forest back to 4-1 on the year, and ended dreams of a 5-0 start. NC State rose to 3-1 on the year with the victory over the Demon Deacons.

“We got off to a really slow start on defense. They are too good of a team to spot a 17-point lead. We were playing from behind against them, and after that I thought we settled in and played better, but it got away from us too quickly,” said Coach Dave Clawson.

One of Wake Forest’s biggest strength on both sides of the football is their momentum.

When a team such as NC state begins outplaying Wake Forest from the very beginning of the game, it becomes significantly more difficult to get the momentum rolling.

Wake Forest did not go out on the field with enough energy and confidence, so they gave up 17 points in just the first quarter to NC State.

The defense realized this shortcoming immediately during the game and analyzed it heavily afterwards. They have been working at practice all week to get back to the rock solid potential they demonstrated in all other games this season.

“We knew we had to get to a fast start against NC State and we failed,” explained defensive back Ryan Janvion. “We closed that chapter. We didn’t play our best ball, and we suffered the consequences for it, but we are moving on. The expectation is to go out on the first snap and be ready to play. Our bodies will be ready to go as soon as the game starts.”

The offense had even more trouble than the defense on Saturday. Wake Forest only had four minutes and 24 seconds of possession in the first quarter, while NC State held the ball for 10 minutes and 36 seconds. With a start like that, the Deacons dug themselves in a huge hole to begin the game. While the Deacs were able to move the ball a substantial distance of 352 yards against the Wolfpack, they had only one touchdown.

“We kicked too many field goals,” said Clawson. “We had 7 carries for 9 yards in our red zone running. You have to do better than that to score touchdowns.”

For the first time this season, Wake recorded far more passing yards than rushing with 283 and 69 respectively.

Offensive lineman sophomore Justin Herron said, “It’s all about communication, then execution. We can’t be one dimensional. We have to start fast and get the run game going early, which opens up a lot of options.”

Wake Forest’s outstanding true freshman running back Cade Carney has been unable to play in the last three games due to a knee injury but returned to practice on Tuesday.

Coach Clawson is still non-committal about whether or not he will play in Saturday’s game.

It is difficult, however, for hopes not to be high, as Carney put up 108 yards and 3 touchdowns at Duke in his most recent last (and second) Wake Forest football game.

The Deacs will also need to improve upon the punt and kickoff returns they ran in Saturday’s game if they want to keep a strong record this season. As long as the Deacons are able to gain solid field position on special teams, they’ll give themselves a chance to score the ball through multiple outlets.

“We completely mishandled the ball on returns, and we didn’t adjust well enough,” admitted Clawson.

The team bounced back this week in practice, looking more determined than ever. “The mindset is still the same. We’re still trying to be 1-0 every week.” Ryan Janvion said.

With the loss behind them, the Demon Deacons are fully prepared to take on Syracuse — one of the fastest offenses in college football this year.

“We’re ready to embrace the challenge,” said Janvion. “It’s going to be up to the defense to make plays and then get off the field.”

The team looks forward to returning to BB&T field after two away games.

“After a loss it’s always good to come back home and play in front of friends and family,” said Justin Herron.

The Demon Deacons will host for Wake Forest’s family weekend, kicking off at 7 p.m. on Saturday.