Wake Forest unable to take down Clemson on the road 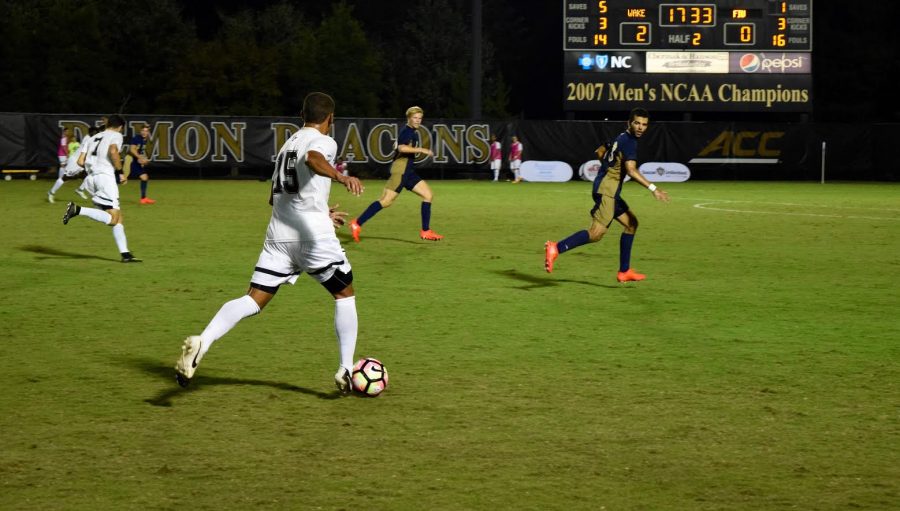 The No. 8 Wake Forest men’s soccer team’s nine-game winning streak ended on Friday, Sept. 30, on the road against No. 5 Clemson. This was their first loss since opening night against Saint Louis.

Both teams battled for the entire 90 minutes. The first half ended without a goal from either side, but the Demon Deacons had the advantage for shots taken. The game’s only goal was netted just as the second half came underway by Clemson forward Diego Campos in the 48th minute. He was fed a cross from right outside of the box and was able to find the back of the net off of his one-timed shot.

The Deacs entered the game knowing it was going to be a tough one.

“We were looking to impose our game on them and control the speed,” said sophomore Logan Gdula. “We knew it would be a physical one, so we focused on playing smarter than them knowing they are very athletic and physical.”

The Demon Deacon’s Hayden Partain came close to finding the back of the net in the 33rd minute when his long range shot went just a little high and bounced off the crossbar.

Wake Forest had other close opportunities in the second half, but in the end, the Tigers were able to hold on to their one goal advantage. The game ended with the Deacs having a 14-8 shot advantage, and leading on corner kicks 8-3. Senior goalkeeper Alec Farrell only had to make two saves, while Miralles made four saves for Clemson.

Wake Forest’s patient and collected offense has served them well so far this season, but the Demon Deacons couldn’t find the back of the net against the Tigers.

“It was a typical ACC game where one play can get you the win,” said freshman forward Bruno Lapa. “After they scored, we continued to push to try and find the goal, but were just unlucky to not come out with a positive result on the road.”

Head coach Bobby Muuss, also used the term unlucky to describe the game for the Deacs. He sees this game as a learning experiences and looks forward to moving ahead from here.

The team will try to continue taking shots and maintaining possession in their game on Oct. 8 against Notre Dame.

They have six more regular season games left to play, three of them on the road.

“Going forward we just need to stay focused and become ruthless, not only on defense but also on the offensive side of the ball. If we continue to play our game, we can compete with anyone in the country,” Gdula said.

The Deacons have reason to be optimistic. Outside of the sole defensive breakdown that allowed the Clemson goal, Wake Forest played their usual quality defense. Wake Forest has allowed only four goals on the year and have demonstrated excellent communication on the field.

The team will attempt to get some good practice time in before another tough game on the road on Saturday.

“Moving on now to the game against Notre Dame, we are really focusing on having a good week of preparation,” said Lapa. “We need to be sure to have a good performance on Saturday to get a way on their field.”