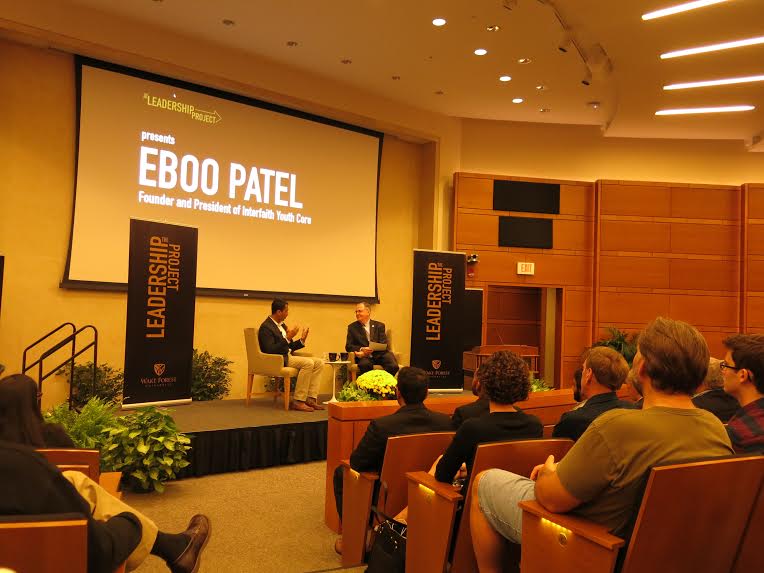 On Wednesday Oct. 5, Eboo Patel gave a lecture in Broyhill Auditorium in the School of Business.

A Rhodes Scholar with a doctorate in the sociology of religion from Oxford University, Patel has had a wide spectrum of life experiences.

Patel is the founder and president of the Interfaith Youth Core, a non-profit organization that builds on religious pluralism with a focus on engaging college students in service surrounding religious diversity. In addition to his work with the Interfaith Youth Core, Patel has served on President Obama’s Inaugural Faith Council and is the author of several books. Patel spoke recently on campus last May as the commencement speaker for the class of 2016. For this lecture, Patel sat down and had a conversation with President Nathan O. Hatch as part of the Wake Forest Leadership Project.

The event was a dialogue between Hatch and Patel, in which Patel shared his life story and how his experiences shaped his life perspectives. Growing up as a Muslim and a child of immigrants in middle-class white America, Patel had to learn to navigate through extra steps than his friends. In college, he learned about identity politics and eventually realized the complexity of privilege and marginalization. He described understanding identity and marginalization to be a process, in which his concept of marginalization and oppression has evolved to not be mutually exclusive.

When asked about how he decided to start a non-profit organization instead of pursuing a pre-established career path, Patel noted that his experiences in college influenced his passions. While a student at the University of Illinois, Patel started eight different student groups; as a result, he felt that recreating that experience in the “real-world” was the most logical next step.

Although clearly an impressive individual, Patel’s professional path has not been without its challenges. Roughly eight years into Interfaith Youth Core, one of Patel’s personal mentors told him that his organization “sounded good wherever you go, but you don’t really make a difference.” This brought up large questions for the Interfaith Youth Core and the direction it wanted to pursue for the future. Mr. Patel decided to move towards making long-lasting institutional differences rather than putting on a “show.” Although putting on a show can be fun, being a ‘contributor’ is the best form of a legacy, Patel noted.

The lecture then progressed to discuss specific questions from the audience and moderator Emaan Mahmood. When asked about islamophobia in the U.S., Patel described himself as an “American optimist,” with hope that Muslim culture would continue to integrate as it has. In 2016, Muhammad Ali and Humayun Khan are both American heroes, with support to go to war and fight for his country and to not go on behalf of Islamic conviction. Citing the controversy of John F. Kennedy’s presidential election in 1960 due to his Catholic beliefs — and that we now have six Catholic Supreme Court Justices — Patel was able to effectively utilize U.S. history to bring hope for the end of Islamophobia.

The lecture was well received by the students who attended, said Marian Isdahl, a sophomore. “I really appreciated the approachable and accessible way that Eboo Patel presented his knowledge. I am glad that I attended the lecture and had the opportunity to hear about Patel’s perspective on social justice and interfaith groups’ role within the movement.”

Mr. Patel concluded the lecture by discussing social justice and the interfaith movement. One of the most remarkable things about the U.S. is that it both welcomes and requires the contributions of its citizens; this expectation creates the great American heroes that never served in official public office, such as Martin Luther King Jr.

Patel made a conscious effort to articulate the importance of understanding different perspectives of social justice.

“I found Eboo Patel’s discussion of a range of perspectives on social justice particularly interesting, especially given its pertinence in the today’s society,” said sophomore Emma Butturini. “By understanding and respecting different definitions of social justice, people are able to more effectively come to an understanding and incite change.”