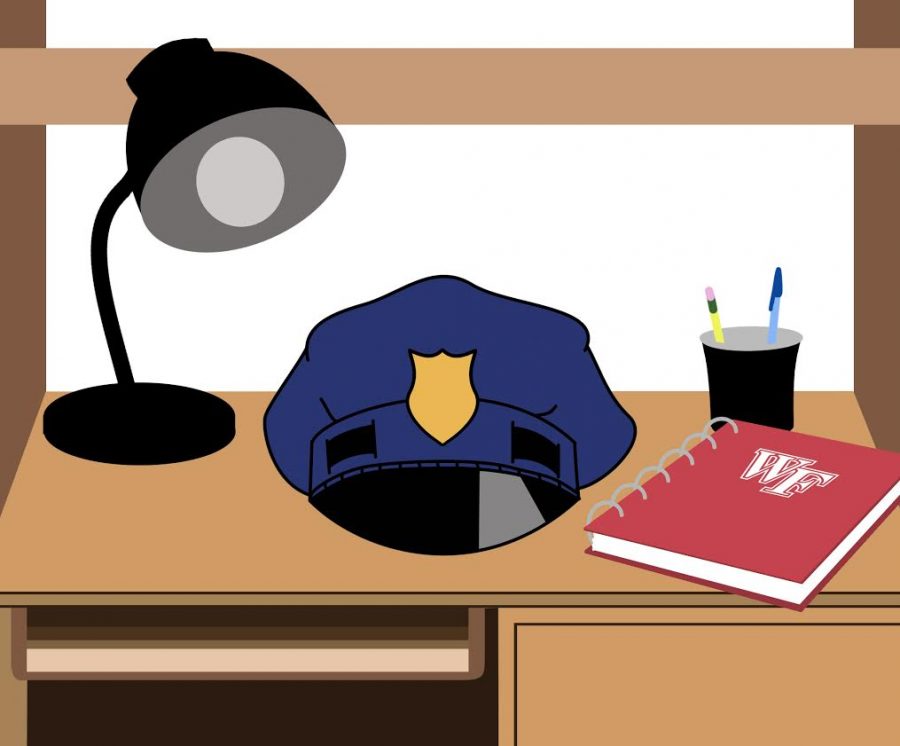 The Wake Forest University Police Department (WFUPD) is offering students a different type of learning opportunity. Unlike the typical classroom setting, this is more hands-on.

Although students don’t get academic credit for joining the Deacon Student Patrol (DSP) unit, they’re employed by the university and have officer-like responsibilities. Some duties include locking buildings, checking call-boxes around campus and serving as an extra pair of eyes and ears for the WFUPD.

Many other universities have had success with student officers, including East Carolina University (ECU). Major Derri Stormer, who is heading the program, worked at ECU before she arrived at Wake Forest in January 2016.

“Before I got here they wanted to develop the program,” Stormer said. “Now we’re getting it off the ground.”

On Sept.19, four student officers joined the Wake Forest University Police Department team. The application process was similar to that of any officer. The applicants went through background checks and had an interview. Since being hand-picked, they’ve trained extensively.

The selected students range from undergraduate sophomores to graduate students.

While Stormer sees the new student officers as a connection between the students and the department, some of the new employees view the experience as more beneficial.

Dominique Barile, a junior majoring in Politics and International Affairs, explained that she was looking for an on-campus job, and this one happened to be in her line of interest.

“When I was 17 years old I got a job at the Raleigh Police Department,” Barile said. “I wanted this experience because I’m trying to decide if I want to become a detective or do criminal law.”

A sophomore student officer, Kayla Heilig joined the team for a different reason.

“After listening to the news about police brutality I took this as an opportunity to see the other side of it,” Heilig said. “I think a lot of people have bad relationships with officers, but if you surround yourself with them, then you can navigate that area a little better.”

While DSP officers are allowed to work up to 25 hours each week, Stormer said the hours are flexible.

Stormer explained that at the end of the day DSP officers are students, not full officers. She emphasized that she doesn’t want anyone throwing authority around.

“They’re an extra presence,” Stormer said. “They’re not underground to catch certain things. We want to build leaders with these students.”

“I don’t know much about the program, but I’d want to make sure that the officers have gone through extensive bias training,” Monaghan said. “It’s important that they’re being intentionally equitable when fulfilling their duties.”’

While the Wake Forest Police Department is not looking to catch people, Stormer said that often times her uniform brings unwanted attention when ensuring campus safety. That’s where DSP comes in.

Although the new initiative is in the best interest of the student body, some feel like this is the university’s way of snooping around the students.

“We have residential advisers, and their role is to report anything obvious,” sophomore Olivia Nastala said. “It seems like student officers would be out to get us by seeking out the bad and not trying to benefit us.”

Another sophomore student, Sarah Averbuch had a similar perspective: “It seems like student officers could create a divide between us and our peers,” Averbuch said. “Wake promotes a comfortable environment, but this seems like it will create a divide.”

Although some students view DSP as stealthy, the DSP officers have dismissed negative opinions.

“I’m sure some students are going to think we’re snitches,” Barile said. “But, it’s what I want to do before my career path, and I know in my heart that it’s to keep students safe.”

Once the program officially begins, the Wake Forest Police Department will likely hire more interested students. Stormer hopes it will gain traction because it could help people navigate what they want to do after graduation.

“You have to see what your interests are,” Stormer said. “But this business will never go out of business.”

“The biggest thing I’d say to interested people is you’re not doing anything different,” Barile said. “If you saw someone who couldn’t get home, you would walk over anyway. The only difference is you’re getting paid for it now.”