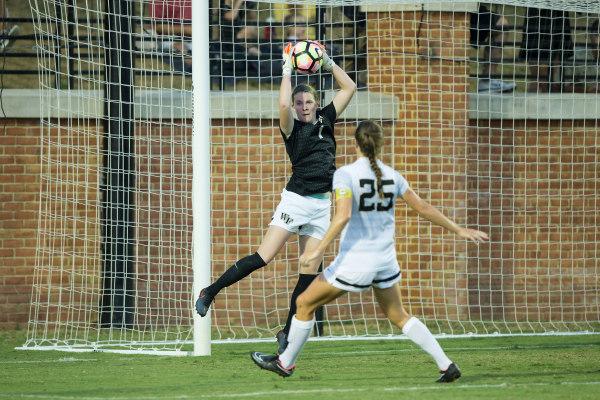 After kicking off the season with eight wins, the Wake Forest women’s soccer team lost their next six ACC games.

The Deacs took on No. 2 Florida State in Tallahassee on Sept. 22, hoping to prove themselves as a serious ACC competitor in the 2016 season. Wake Forest held the Seminoles to just five first-half shots, and both teams charged into the second half hoping to put a point on the scoreboard. Florida State broke through, scoring three goals in just three minutes.

Although the Deacs responded with shots on goal from Kendall Fischlein, Kahla Seymour and Kate Ravenna, FSU goalkeeper Cassie Miller saved all three to preserve the team’s fifth straight shutout.

Wake Forest led the all-time series 16-6-1 but couldn’t pull out another win against the Wolfpack. In the 10th minute of the game, Wake Forest’s Sarah Teegarden scored her second goal of the season, but the Deacs conceded a pair of second-half goals to lose the match 2-1.

Wake Forest traveled to Miami the following Sunday, Oct. 2 to take on the Hurricanes. By the fourth minute, Miami was leading Wake Forest 1-0. The Deacs answered 10 minutes later with a goal by sophomore Peyton Perea, assisted by freshman Haley Jordahl and junior Claudia Day.

The teams each had 10 shots with five on goal. However, Miami’s Dejah Cason scored the game-winning shot in the 58th minute.

After three road losses to ACC foes, the Wake Forest women’s soccer team returned home to host No. 9 Duke. In the 17th minute of play, Peyton Perea took a fierce shot on goal, but it bounced off the post, and the Blue Devils took possession.

While Duke was able to get a short range goal in the 18th minute, the Demon Deacons could not capitalize on the few opportunities they had for points. Wake Forest’s Lindsey Preston had a strong performance in goal with five saves, but the Blue Devils came out with a 1-0 win.

The Deacs hit the road last Sunday to take on No. 10 North Carolina despite the inclement weather conditions from Hurricane Matthew. North Carolina won each of the past three seasons’ matchups, including a 1-0 victory in Winston-Salem last year.

Wake Forest managed to get on the board first when Peyton Perea tapped in her fifth goal of the season.

The Tar Heels dominated possession in the second half and led in shots 7-1.

A yellow card for Deacon Sarah Teegarden resulted in a free kick from 20 yards by North Carolina’s Dorian Bailey that deflected off the inside-left goal post and into the net for the game-winner.

Wake Forest fans had a sense of hope going into conference play as the Deacs were the only undefeated and untied ACC team this year. However, the women’s soccer team struggled greatly against their ACC opponents, racking up six consecutive losses.

Wake Forest will look to achieve their first ACC win on Saturday, Oct. 15 against Boston College. The Deacs will take on the Eagles at Spry Stadium at 5:00 p.m. ET.