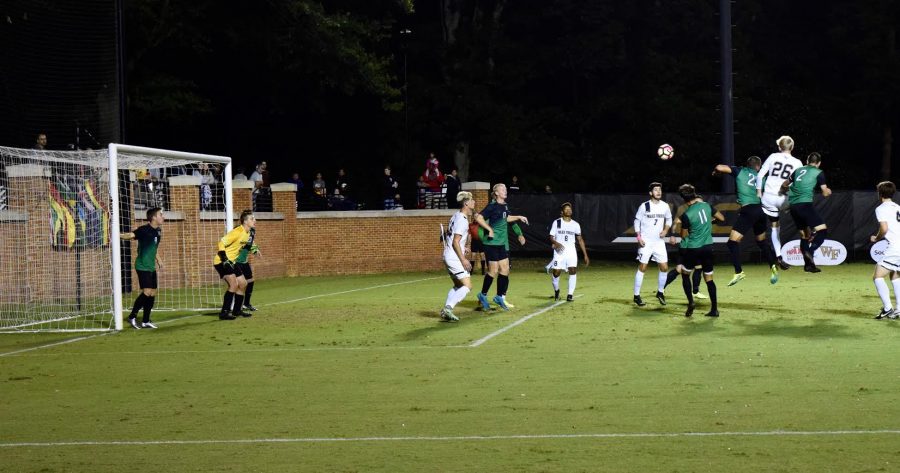 The No. 10 Demon Deacon men’s soccer team traveled to Indiana this past Friday, Oct. 8 to face then-No. 1 Notre Dame. They closed their three-game road swing with a 2-2 tie after two periods of overtime.

They entered the game against the Fighting Irish with confidence and intensity which enabled them to get on the board in the eighth minute. Freshman Ema Twumasi netted his third goal of the season when the Notre Dame defense was unable to clear the ball from a corner kick sent in by Wake Forest. He shot the ball right outside of the box and was able to sneak it past Notre Dame goalkeeper Chris Hubbard.

Wake Forest went into this game knowing it was not going to be easy.

“We expect to see a very organized team that is always hard to break down” said sophomore midfielder Brad Dunwell before the game. “But we’re excited for the challenge of facing the number one team in the country.”

The Demon Deacons were able to keep their 1-0 lead throughout a majority of the first half until the 40th minute when Mark Gormley was able to slot the ball past Wake Forest red shirt senior goalkeeper Alec Farrell.

The Irish came out strong in the second half determined to take the lead and scored again just three minutes in. They won a free kick on the left side of the 18-yard box, and Brandon Aubrey reacted to Even Parken’s feed with a diving header.

This was the second game in a row that the Deacs gave up a goal in the first five minutes of the second half. They did the same against Clemson on Sept. 30 which resulted in a 1-0 loss.

They were, however, able to answer back in the 67th minute against the Irish when senior Jacori Hayes received a ball from Ian Harkes. He hit it with a clean strike just inside of the left post.

Both teams had opportunities at the end of regulation, — and into the two overtime periods — but were unsuccessful in finding the back of the net.

The Deacs outshot the Irish 19-13, and had 11 shots on target to their opponent’s four. The Irish, however, were the first team this season to score more than one goal in a game against Wake Forest.

On Tuesday,  Wake Forest played host to the Marshall Fighting Herd, a conference USA team that gave the Demon Deacons all they had for 90 minutes.

Marshall came into the game off of a 3-2 overtime win against Liberty, while Wake Forest, coming off of a 2-2 draw against Notre Dame, was looking to begin another unbeaten streak similar to the nine-game streak that they had earlier in the year.

In the 14th minute, junior Luis Argudo drew a penalty kick off of a collision with Marshall goalkeeper Trevor Clemens inside the box. Senior midfielder and Captain Ian Harkes buried the penalty kick in the bottom left corner, giving the Deacons a 1-0 lead that they wouldn’t relinquish. The win was also head coach Bobby Muuss’s 100th of his career and his 26th as head coach of the Demon Deacons. Wake Forest will take on No. 4 Louisville at Spry Stadium this Saturday, Oct. 15.