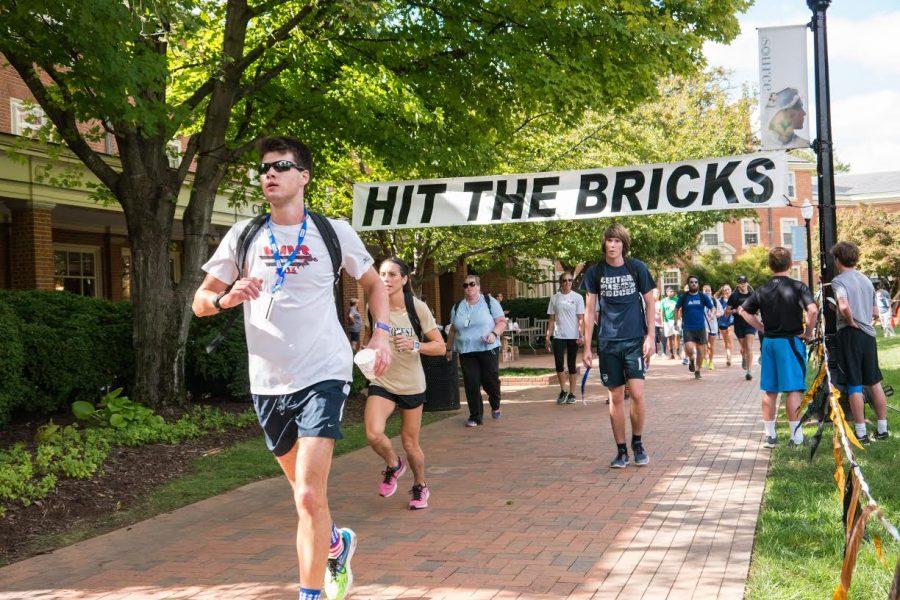 Hit the Bricks, an annual tradition where students and faculty take turns running or walking around Hearn Plaza for eight hours, was yet again a huge success this year.

118 teams made up of 1400 participants showed up from 11 a.m. to 7 p.m. on Oct. 6 to partake in the festivities. The teams raised money to support the WFU Brian Piccolo Cancer Research Fund, and the total donations this year are projected to be over $50,000.

This commemorates the 36th year of the Brian Piccolo Cancer Research Fund. Each year, Wake Forest hosts this event in memory of Brian Piccolo, a highly accomplished running back who attended Wake Forest in the early 1960s and went on to play professionally for the Chicago Cubs. Unfortunately, Brian battled with testicular cancer and passed away at the young age of 26. The movie “Brian’s Song” was based on his story. After his death, a fund was started in his name to research and improve cancer treatments, and Hit the Bricks started in 2003 to support this cause.

The event began with a short opening ceremony and some words dedicated to Brian Piccolo. Then, the participants lined up at the starting line and the event officially began when a throng of people zoomed past the bookstore. Teammates wore backpacks weighted down with sand and held scanners so their laps could be counted towards their total. These dedicated runners passed off the backpacks in a relay style in order to complete the highest number of laps and walk away with the trophy of an engraved brick.

Throughout the day, various vendors provided free food and raffle prizes were given away. Participants took a break from the repetitive path by trying the Krispy Kreme Lap, Wacky Costume Lap or Anything But Feet Lap. Spectators could see strange characters such as a dinosaur or a banana enthusiastically running around the quad to raise money for cancer research.

“It was so great to see the whole school come together — students, faculty, and staff — to unite against one common goal of beating cancer,” said Hit the Bricks Executive Chairman Sarah Bischoff. “It was a beautiful day with food, entertainment, activity and fun and a proud day to be a Demon Deacon.”

After eight hours of fun, everyone gathered for one silent lap in memory of all those affected by cancer. The event concluded in front of Wait Chapel as two students shared their personal stories with the disease. The steps of the chapel were lined with luminaries that had the names of loved ones who were victims or survivors of cancer. This emotional ceremony gave hope that the event’s contributions can help lead to medical advancements and that, in the future, we can discover a cure for the disease.

The enormous crowds ran in circles to compete and have a good time, but mostly to make an impact on the lives of cancer patients. The patients and their loved ones at the Wake Forest Baptist Medical Center’s Comprehensive Cancer Center are appreciative of the long history of donations and support from the university.

A theme that speakers emphasized throughout the day was that if Brian Piccolo faced the same diagnosis with today’s medicine, he most likely would have survived. The progress made in cancer treatments has greatly assisted those who are afflicted with the disease.

At the end of the day, participants accomplished an impressive combined total of 30,000 laps and raised a total nearing $50,000 for the Brian Piccolo Cancer Research Fund.

The efforts of the donors and participants made the event a widespread success. This spectacular event provided a great experience for everyone to join together in the fight against cancer.