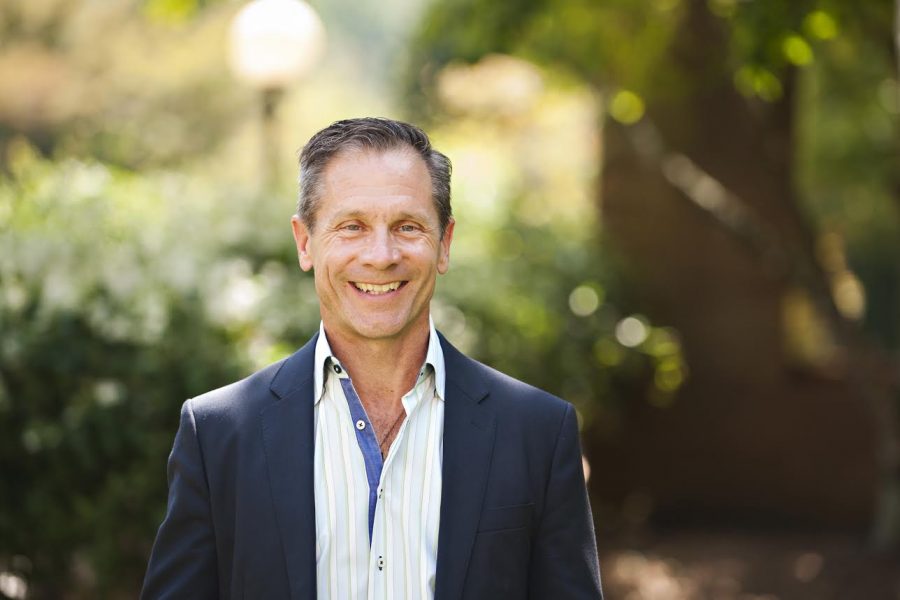 Don Jodrey, a Wake Forest alum and senior policy adviser to the assistant secretary of the Interior for Fish and Wildlife and Parks, returned to campus this semester to teach an upper-level course on natural resource law and sustainability.

Jodrey, who values his informal relationship with his students — he asks them to call him Don — takes a creative approach to teaching, legislation and litigation, comparing his role to that of a florist with the power to arrange, shape and reform the law.

His interest and expertise in ecosystem restoration and environmental protection developed through advising leadership in the intergovernmental restoration of the Everglades and on the RESTORE Council established by Congress to address the effects of the BP Deepwater Horizon oil spill on the Gulf of Mexico regional ecosystem. The 31-year-career federal civil servant also has extensive experience working for government agencies, including the Air Force and the International Trade Administration.

How did you choose Wake Forest for your undergraduate education?

I grew up on the west coast of Florida, near St. Pete, and I only applied to three schools. I didn’t want to go to Duke because my mom went there, and I didn’t want to go to a school in Boston I picked because my dad went there. So I applied to three schools, and Wake Forest was the one I wasn’t sure about, but I visited it in the spring and I fell in love with it. I quickly got into some great classes and developed a great group of friends.

I was living in Graylyn for my junior year, and that was kind of the fun place to live because everything was sex- segregated, but we were co-ed. We used to have rollicking, fun parties, and I would invite professors out. Maya Angelou came and spoke with us one night in French. It was really a fun place to live. I stayed there last week and thought this is nicer than it ever was with us.

What was your career path after graduation?

I graduated from Wake Forest in 1984. I moved to Washington because I wanted to get a master’s in public administration. So I went to American University, which had a very good program. The reason I wanted to do that was because my father had been an army officer — I’m an army brat — and he was also a public servant.

I love Wake Forest, but I went to Washington to look into careers with public service, because my dad had been the mayor, and I really wanted to do that. While I was there, I was working with the the International Trade Administration and U.S. and Foreign Commercial Services in the Commerce Department as an intern, and I also worked on Capitol Hill. But at the end of graduate school, I got what is today known as a Presidential Management Fellowship. That’s a two year program where the government hires you, and you design an executive development program, so you move around for two years.

I ended up at the Interior Department in 1987 in the Office of the Secretary in the budget office. I learned my first skill before I was a lawyer, which was how to write a rider, get it into a bill and make some kind of substantive law happen.

Why did you choose to return to American University for law school?

I was [at the Department of the Interior] during the Reagan administration in the secretary’s office, which was like 300 people. The interior’s organization had 68,000 employees, and we’re the superstructure on top of those nine agencies. I was in the budget office for five years when the Clintons came in in 1992, and that’s when I went to law school. I had my degree, decided lawyers were having all the fun and five years in I thought, “let’s go get a law degree”. I couldn’t stand budget work — it was so repetitive.

How did you develop your relationship with natural resource conservation and sustainability?

I built the program. The Everglades was parched for water, and Florida has access to a lot of water, so we were trying to create this infrastructure to put it back. While I was going to law school at night, I was doing the appropriations side of the Everglades Initiative for the Clinton interior team, which was a really tight, good team — he had the same people all eight years.

The Everglades Initiative started in 1992, so by the time I got out of law school in 1996, we were doing a lot of legal stuff. They said, “Hey, you’d be great to do the legal aspect of this. Your budget background is perfect, you know what to do” and with that presidential fellowship that recognized talent, I was moving up the chain kind of fast.

So then I was an agency counsel kind of doing litigation. The Justice Department represents the U.S. in court, but the agency counsels are in charge of the clients that are in charge of the cases, so I had a lot of good cases, including one of the biggest environmental cases that justice had ever had, which was the U.S. vs. South Florida Water Management District, in which we were suing the state of Florida over its pollution of the Everglades.

How would you describe the concept of collaborative conservation that arose from your work?

It’s basically trying to find ways for the federal government to partner with states, tribes, local governments and stakeholders to do something to fix an ecological stressor. You don’t get anything perfect, but you try to “straighten out the mess.” My forte is fixing problems that we created before we realized that they were problems. Because of our use of the Mississippi River, a football field of wetlands disappears in Louisiana every minute.

How did you decide to return to Wake Forest to teach?

I was tired after Earth Day, and I said, “Look, the election’s coming up, and I need to write the transition plan — the real one, not the little fake one in the books. I need to be able to think; I need to be able to speak out publicly, and I can’t do that when I’m here, so would you mind if I go off and teach.” I want to make my students into the very best lawyers they can be.

Are you working with sustainability initiatives or are you involved with any other projects outside the classroom?

I’m teaching this class twice a week. I told the LGBTQ center I’d be a faculty advisor for them, because I believe strongly in equal protection under the law.

I’m also helping a friend of mine put together an art show. I was on the student art committee when I was here, and I didn’t get to go on the buying trip, but I did get to help select the stuff that was bought later. She’s a commercial artist in D.C. She’s very widely collected, and she wants to do an art show for the visually impaired. She’s going to 3D print it out as a raised thing.

I’m going to help her raise money for that, so that’s a special project for next year. I like art; I collect it.

The other thing I’m doing is a speaker series for the university on sustainability. I’m trying to get a few national names.

I think while I’m here, I’ll do some voter I.D. polling access stuff, because that’s something I feel very strongly about.

I have kind of a full plate, but if I even get half of it done, I’ll be happy.

What has been the best part of your experiences in the classroom so far?

The students I have are very diverse — they’re from different places and countries. They’re really inquisitive, they’re very thoughtful and they’re what I’d expect of Wake Forest students. They come prepared, they’re academically gifted and they have amazing backgrounds and work experiences.