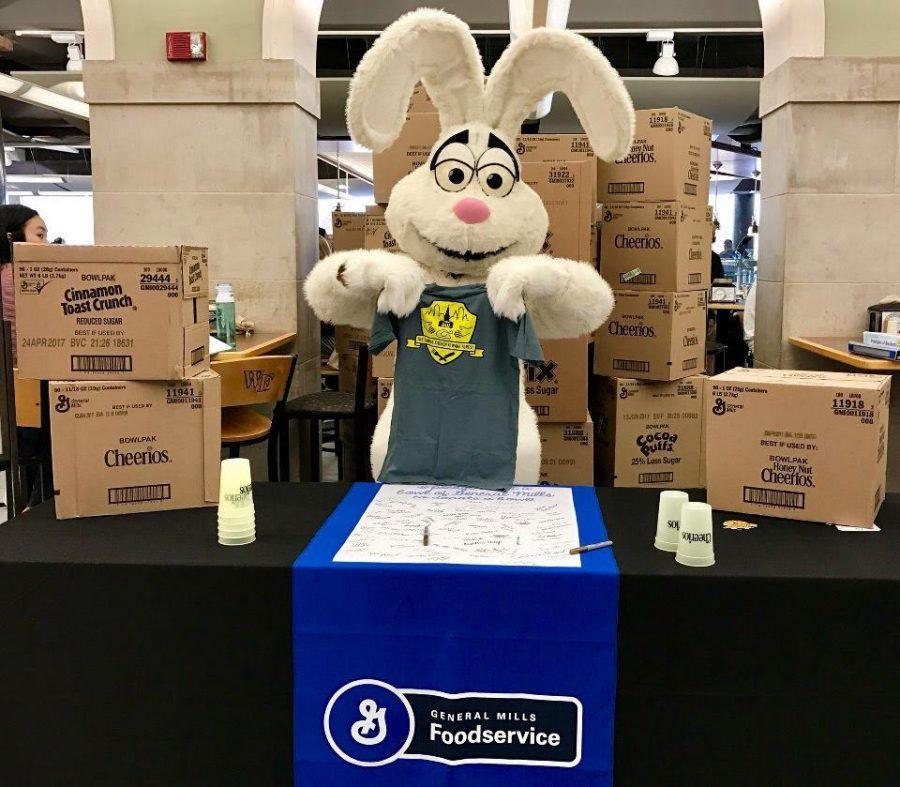 For the month of October, eating cereal in the Pit has been helping feed the hungry, and that doesn’t just mean you.

Whether your cereal of choice is Cheerios, Cinnamon Toast Crunch, Cocoa Puffs or any other General Mills brand, every time you have been filling your bowl, you are filling someone else’s as well.

The Campus Kitchen partnered with General Mills, one of the largest food companies and the owner of several major cereal brands, to donate cereal to 10 of Campus Kitchen’s community partners in Winston-Salem.

“General Mills first approached Aramark this summer with the idea for a substantial cereal donation, and from there one of our long time partners in Aramark, Jessica Wallace, reached out to Campus Kitchen,”  said Bradley Shugoll, assistant director of Public Engagement in the Pro Humanitate Institute at Wake Forest. “It seemed like a great fit and opportunity for our organization and community partners, so we started working to make it happen.”

The Campus Kitchen at Wake Forest pursues their goal to recycle prepared but never served food from campus dining into new meals for social service agencies in the Winston-Salem community. According to USDA, approximately 39,000 people in Winston-Salem earn less than the income threshold.

Those people who do not have cars and are unable to reach local supermarkets live in what are known as “food deserts,” which refers to a location whose population lives with little to no access to a grocery store. In urban areas, this means they live more than one mile from a grocery store, and in rural areas more than 10 miles.

“The goal is to eat and donate around 5,000 bowls worth of cereal,” Shugoll said. “This will only happen if we get participation from students across campus to commit to eating cereal during the month of October. For each bowl of cereal a student eats, a bowl will be donated to the Campus Kitchen.”

As of Tuesday, Oct. 18, 2,400 bowls have been donated to community partners. The event will continue through Oct. 31 in hopes of reaching the 5,000 bowl goal.

“General Mills is completely in line with our mission as an organization to educate our community about food insecurity and to fight hunger by providing meals to those in our community,” said Jessica Jordan, president of Campus Kitchen.

This event is one of many that Campus Kitchen utilizes to help deliver meals to underserved areas of our community each week. According to Shugoll, Campus Kitchen helps to deliver over 200 meals and about 500 pounds of fresh produce a week, all through student involvement and volunteers.

“By having events with us in the Pit, like cereal stacking contests, we are able to engage Campus Kitchen team members with other members in our Wake Forest community,” Jordan said. “This can really help us recruit more volunteers, which is really important, because our organization is dependent on volunteers.”

Campus Kitchen hopes that this project is a precedent for future endeavors with companies like and including General Mills. The project not only connects Campus Kitchen with outside industries looking to get involved to reduce food insecurity but also with the Wake Forest student body. Each bowl of cereal consumed is directly contributing to the amount of cereal being donated to the Winston-Salem community.

Whether students know it or not, they are making a significance impact on their community with every single bite.

“This food goes to organizations that are working to strengthen their communities and can put the food to good use,” Shugoll said. “We hope the awareness raised by this event will help our campus community to think about the influence they can have and to find ways to get more deeply involved to reduce food insecurity.”