Fall Choral Concert has a theme of patriotism 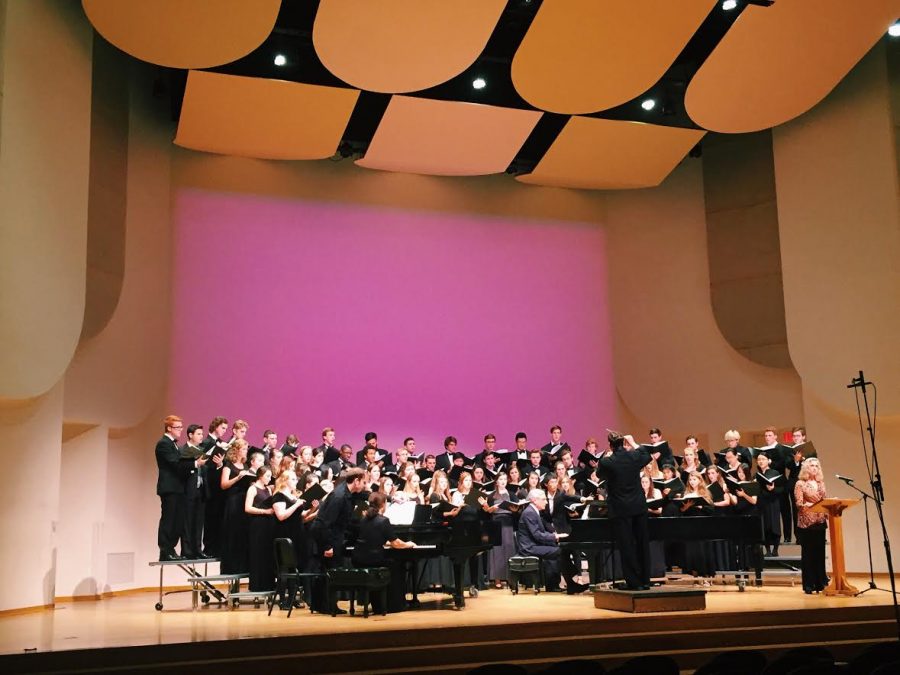 In the midst of a tumultuous political year, Wednesday evening was pure red, white and blue ecstasy.

“A lot of the time we sing in different languages,” said junior Mary Alexander Patterson, a Concert Choir soprano. “It’s kind of nice to sing in English and sing songs that were written by American composers. I feel like they don’t always get much recognition.”

One of these composers, who by no means lacks recognition, was the reveredWake Forest professor, Dan Locklair, a world-class composer.

One of his two pieces, the revised “Since Dawn,” a 20-minute tone poem based on Maya Angelou’s poem and “On the Pulse of Morning,” was performed by both choirs; two pianists, professors Joanne Inkman and Louis Goldstein and a narrator, Caroline Gorelick.

Inkman and Goldstein began with a swift, building sonority. Beneath, the choir’s ghostly whistling broke into a chilling flood of voices, nothing short of angelic.

Then Gorelick, as conducted by her husband and Director of Choral Ensembles Brian Gorelick, read “A Rock, A River, A Tree.”

Gorelick read the final stanza, “Here, on the pulse of this new day/You may have the grace to look up and out/And into your sister’s eyes, and into/ Your brother’s face, your country/And say simply/Very simply/With hope — Good morning,” and the choir zealously repeated.

Locklair originally set the poem years ago for its premiere on Sept. 28, 1996 in Wait Chapel. Angelou herself narrated the poem, and rather than two pianists, the Winston-Salem Piedmont Triad Symphony performed with a choir.

On a sabbatical in the spring of 2015, Locklair, who has received a steady stream of commissions since 1982, dedicated himself to several special projects, including a requiem in memory of his parents and the “Since Dawn” revision.

An Ohio State University doctoral student, whose dissertation centered on Locklair’s “Since Dawn,” suggested the change of accompaniment from orchestra to pianos, on account of how expensive it can be for an organization to perform such a piece, from purchasing the music to hiring the orchestra.

“Virtually every school, every civic organization has access to two grand pianos,” said Locklair.  “Furthermore, there are a lot of pianists around.  It was a very utilitarian, practical solution.”

However, Locklair’s second piece — the whimsical “For This Is Love,” a world premiere — was far from utilitarian.

Sam Gladding, a professor in the Department of Counseling, commissioned his long-time friend to compose the piece for his 30th wedding anniversary.

“I wanted something a little more permanent,” Gladding said. “Also, in giving the music of Dan Locklair as a present, I was able to share an enriching experience for years to come with others.”

Gladding, who received his B.A. in history and M.A. in counselor education from Wake Forest, met his wife Claire when he was an assistant professor of counseling at Fairfield University in Fairfield, Connecticut.

“She was a librarian, and I checked her out,” Dr. Gladding said.  “I took her out of circulation.”

They were married on May 24. And in honor of their spring ceremony and Claire’s Connecticut roots, Gladding and Locklair chose the Robert Frost poem, “A Prayer In Spring,” as text for the piece.

Coincidentally this tied Locklair’s pieces together with Angelou, who performed “Since Dawn” at President Bill Clinton’s inauguration in January 1993 and was the first poet since Robert Frost to be asked to create a poem for an American presidential inauguration.

“Like we always try to convey to students who take our Music 101 classes, or that take music theory, the more you know about any piece and can dig beneath the surface, the more powerful it is,”said Locklair.