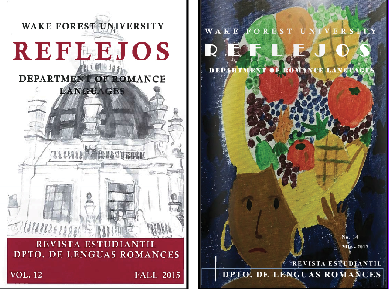 The magazine publishes works written by students in various stages of their Spanish language education.

In 2001, Professor Candelas Gala created “Reflejos” as a way to compile creative works of students and to encourage them to explore the Spanish language and culture in a new light. The magazine soon picked up, allowing students to see their work published.

Professors Karina Bautista and Claudia Francom became involved in 2012 and 2015, respectively, and currently serve as editors of the magazine. Their role includes selecting the literary works that are chosen to be published in the magazine.

This year, they have instituted a prize for the best creative work and image out of the submissions. These images include paintings and photographs submitted to the magazine by students.

One of this year’s winners, a poem by sophomore Ruppert Congmon, surprised Francom.

“The syntax and vocabulary he used is just amazing,” said Francom. “That poem could have been written by a native.”

The image featured on the cover of the magazine, by sophomore Julia Haines was inspired by the poem “The United Fruit Co.” by Pablo Neruda.

Congmon and Haines’  pieces are some of the many featured in this edition of the magazine which is now completely online. Many of the published students have videos online as well. These include introductions of themselves and short descriptions of their piece.

In the future, those involved with the magazine hope to include more videos and possibly comic strips now that the online component allows for more versatility with submissions. They are also considering the benefits of  expanding their social media presence with Facebook, Instagram and Snapchat accounts.

Students are looking to make “Reflejos” more interactive, including creating a feature to click on the table of contents and get definitions of more difficult vocabulary words used in the works.

“We want more students and faculty to read these stories, so platforms of the magazine that are more interactive could help,” said junior committee member Zach Searle.

“Disseminating the information is a little different, because you can’t just hand it out,” said committee member Kalyn Epps. But the committee members still aim to make “Reflejos” visually appealing.

The committee members’ main purpose is to bounce around ideas and work on the format of the magazine. Among the ideas they are discussing is having a study abroad tip section for students looking to study in Spanish-speaking countries.

“‘Reflejos’ is important, because it provides students with a chance to see their writing published and see the uses of learning Spanish,” Epps said. Students who want to submit their work could contact one of the professors involved, and more information will be available next semester with deadlines.

The next magazine is set to be published sometime next semester, and more dates and deadlines for submissions will be available. Submissions  are open to both beginners and native speakers, and anyone is encouraged to submit any work.

Writing in Spanish gives students a new way to understand the language without the systematic feel of assignments and verb conjugations. Through “Reflejos,” students are able to express their creativity in a language that they might not been comfortable with before taking classes at Wake Forest.

“[‘Reflejos’] made me think about Spanish in a different way,” Epps said. “It helped me see the big picture and the creative side of it as well.”