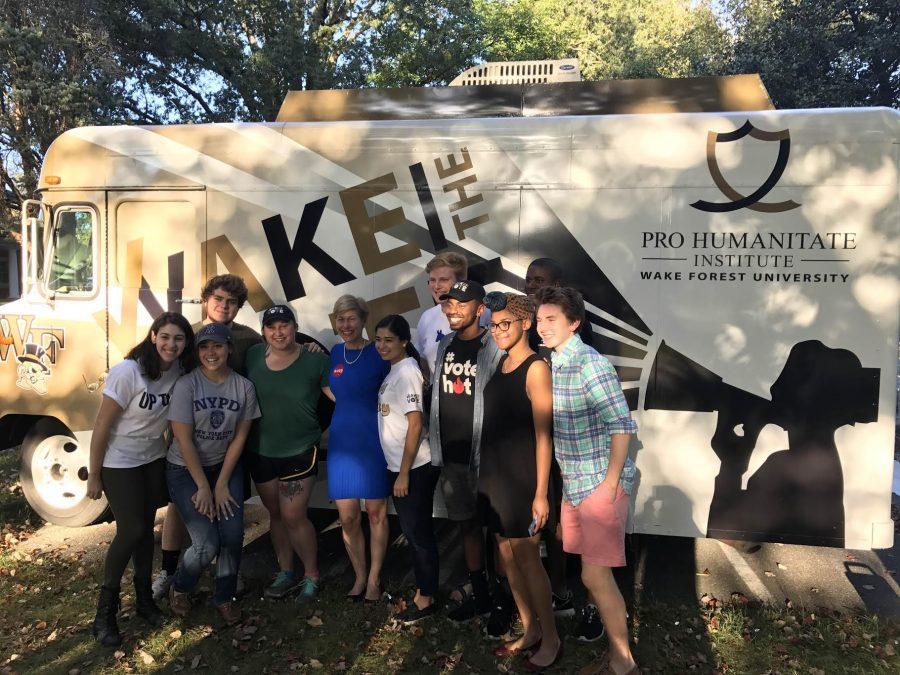 Voters along the political spectrum can agree on one aspect of this presidential election: its importance pertaining to the role of women in politics.

While such strides are noteworthy in the political sphere, the discussion on domestic violence is one that is just beginning to gain proper coverage.

On Tuesday, Oct. 18, the Wake the Vote Hub — a new development featuring artwork dedicated to political involvement in local and national elections — hosted an event discussing this very issue. A panel of locally pronounced women gathered at the Hub to share their opinions on violence against women, specifically pertaining to the current election.

The panelists included: Tanya Jachimiak, the Title IX coordinator, Elizabeth Jeter, a member of the board of directors for the Women’s Fund of Winston Salem, Deborah Ross, the state’s democratic candidate for the Senate, Melissa Harris-Perry, a professor and founder of Wake the Vote; Valene Franco, a managing attorney at Legal Aid, Camry Wilborn, a university fellow at the Pro Humanitate Institute and Hannah Dobie, a senior and participant in Wake the Vote.

The conversation largely focused on the prevalence of domestic violence and efforts by politicians to solve the deeply rooted issue.

According to the National Coalition Against Domestic Violence, each minute twenty people are abused by their intimate partner, equaling more than 10 million victims each year.

However, domestic violence is not only physical violence. It also includes sexual violence, threats and emotional or psychological abuse.

“Domestic violence is a real issue occurring even on the Wake Forest campus,” Jachimiak said. “If you look at the Clery Act, it would seem that the numbers here are low. This is only due to the type of violence reported, where it occurs and who reports it. In reality, we exceed over 70 reports of sexual violence each year.”

The conversation about domestic violence ties back to the current election by noting the importance of electing women, in addition to statements made about women during the election cycle.

During her time in the North Carolina House of Representatives, Ross worked to co-sponsor a bill that expanded domestic violence shelters, provided security for victims and made it a felony to violate a protective order.

“It is so important that the demographics of the state and of the nation is properly represented by our leaders,” Ross said. “If it had not been for the women I worked with in the House, I truly don’t know if that bill would have been passed.”

Ross’ argument on the panel focused on the importance of women in positions of political power; other panel members reiterated this position. Dobie worked for a grassroots organization in Tennessee that pushed to elect women to leadership roles in politics.

“It is so important to have women who are moms or those who understand what it is like to be a working woman share their voices on such issues in the general assembly,” Dobie said.

However, the recent movement to elect women to political positions is not the sole incident that brings domestic violence into the conversation this election cycle. The two presidential nominees also play a significant role in opening up such discussion.

“As a woman who has long worked in the world of domestic violence, I find it interesting that it was not until Donald Trump’s discourse turned directly to sexual assault that his followers got truly concerned with his rhetoric,” said Harris-Perry.

Perry’s statement alludes to recent statements made by the Republican Presidential Nominee Donald Trump regarding women. Statements including that if he had the chance, he would grab women’s genitals and that he could get away with such actions because of his fame. His words bring awareness of domestic violence to the forefront of political discussions.

“I actually expected to see a significant raise in reports due to Donald Trump normalizing demeaning talk,” Jachimiak said. “This language is offensive to both genders, but it is especially hurtful to women.”

The reports on campus themselves reflect the prevalence of violence at a presumably safe institution such as Wake Forest. According to Jachimiak, statements made by those in positions of power that normalize inappropriate behaviors act as a counter to any type of progress.

The final consensus of the panel was that tackling domestic violence begins with empowering women.

“Most importantly, stay woke and make sure you get out and vote,” Ross said, as she closed the panel discussion.