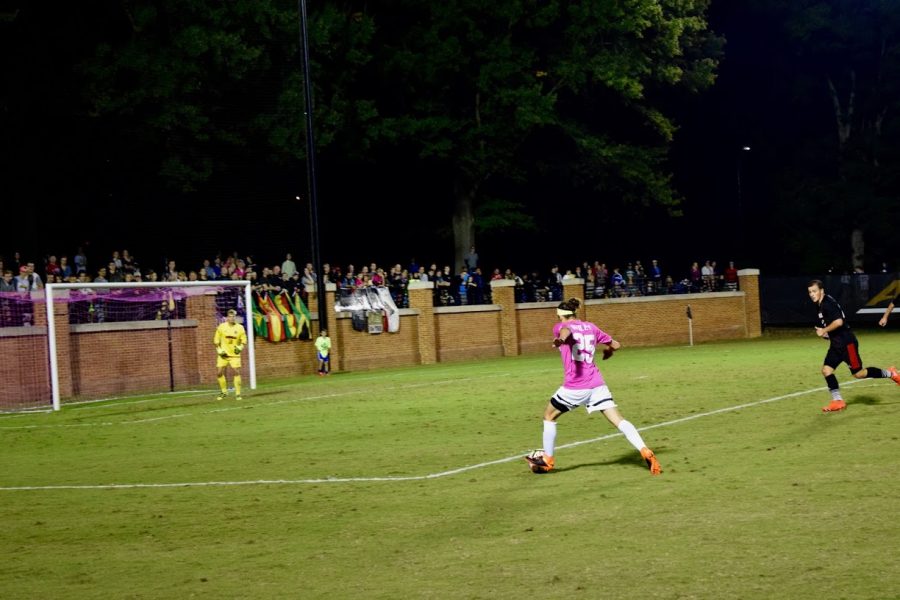 The No. 2 Wake Forest men’s soccer team added two more wins to advance to 11-2-2 on the season. Their 2016 non-conference play closed on Tuesday night in a win against No. 21 South Carolina on the road.

The team entered the week with confidence and excitement coming out of their 2-1 win against Louisville on Saturday night. This game moved the Deacs to 4-1- 1 in ACC play.

Wake Forest got on the board early when senior Jacori Hayes scored in the 24th minute of play. The ball was played in by senior Ian Harkes on a corner kick and put back into play by defender, sophomore Sam Raben. Hayes was able to strike the ball without taking a touch and sent it to the top right corner of the net past goalkeeper Stefan Cleveland.

While Wake Forest gave up a goal in the opening minutes of the second half for the past two games, they were able to get one in their favor against Louisville. In the second minute of the second half, freshman Ema Twumasi drew a PK after he was taken down in the box. Harkes stepped up to take the kick and slotted it just inside the right bottom corner of the net.

“We went into the game knowing that a win against Louisville would really make a statement around the country of how good of a team we are,” said junior forward Jon Bakero. “It was a really good team win which also allows us to own our destiny in the ACC.”

The Demon Deacons wore pink jerseys during the game at Spry Stadium.

After the game, fans were able to bid on the players’ jerseys worn during the game. The Deacs were able to raise $2,750 for the Susan G. Komen Foundation.

“Tuesday games are always rough,” Bakero said. “South Carolina is a very good team but once again we managed to go through some hard times and bounce back with a late goal that won us the game.”

Wake Forest was tied with Louisville for number one in the ACC Atlantic standings prior to playing Louisville on Oct. 15.

Because of the win, Wake Forest broke the tie between the two teams.

They’ll need to continue capitalizing on their chances late in the game in order to maintain this winning streak.