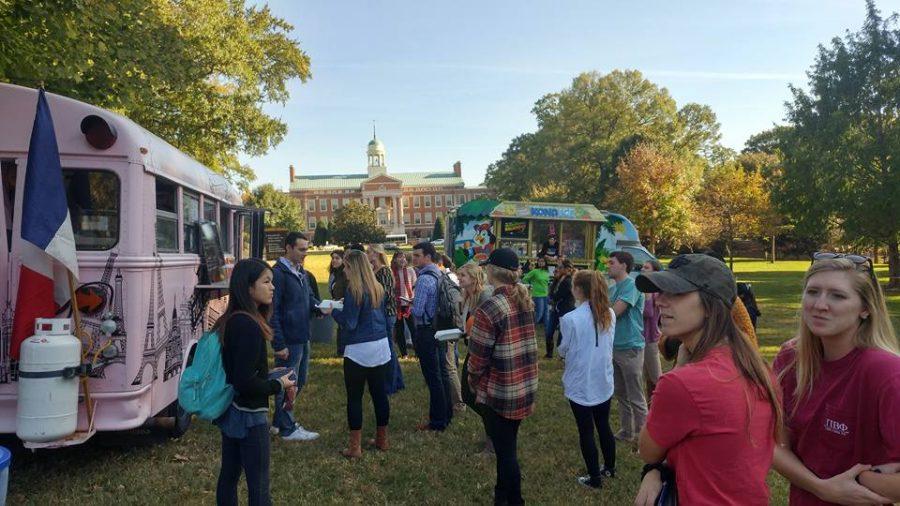 Homecoming 2016 arrives at a time when it has never been better to be a Demon Deacon.

Our football team is 5-2 and fighting to remain in contention for a bowl game. Each entering class is stronger academically and more diverse than the last, engaging campus with their talents and perspectives. A brand new recreation center is under construction, our beloved Pit has been revamped for the fall semester and our students and faculty continue to make major contributions across all disciplines, cultivating pride in our top-30 university. The week of Oct. 24-29 is dedicated to celebrating our shared identity and accomplishments as Demon Deacons.

Sophomore Lauren McCoy, the director of Homecoming for Student Union, has the vision and power to orchestrate all of the details governing Homecoming week. McCoy was a  member of Student Union last year and helped bring big events like Homecoming and Springfest to campus. She explains that her motivation for taking responsibility for Homecoming this year was a love of these campus traditions, saying, “There’s nothing more fun than planning an event that connects both students and alumni with celebration of our incredible campus community.”

This year’s theme, “Going for Gold,” is a reflection of Wake Forest’s connection to the world at large. McCoy explained that the Olympics were intended to bring a sense of unity across the globe through athletics, and Homecoming is similar in that it features a week-long series of events intended to unite the Wake Forest community. “It also helps that the gold medals of the Olympics could fit with Wake’s colors,” McCoy said.

McCoy leads a team of 40 dedicated Student Union members who kicked off the festivities with a “Wake Up to Homecoming” breakfast on Monday. Student Union distributed free breakfast items like donuts, fruit, yogurt and mini muffins to students between classes under the backdrop of big golden balloons spelling out #WFUHC. Across from Tribble Courtyard, a tent was constructed for Friday’s activities, foreshadowing the fun to come in a week of celebration. Later that afternoon, approximately 10 student organizations came together for banner painting, an annual competition in which students demonstrated their artistic capabilities in a Demon Deacon-themed banner. All of the banners are displayed on the upper quad, and the winning banner will be displayed at the Homecoming football game on Saturday.

Tuesday featured an afternoon of free food, activities and performances on Davis Field. Approximately 300 students received free food vouchers for local food trucks, enjoying their meals while participating in small games. One station featured a series of paint-filled balloons taped to an outline of Wait Chapel on canvas, and students played darts to pop the balloons and color the canvas. At another station, students selected and painted pumpkins with the best-decorated pumpkins earning prizes like a Polaroid camera and WFU gear. Later Tuesday evening, a series of student performers took the stage to perform for their peers, displaying a wide range of singing, dancing and performing talents. This “Collision of the Arts” aligned with McCoy’s motivation for Homecoming by showcasing the talent of our students and uniting the community in support.

Wednesday featured a beloved Wake Forest tradition: Project Pumpkin. In the spirit of Pro Humanitate, the Project Pumpkin planning committee brought hundreds of children to campus for safe trick-or-treating with college students who were more than eager to dress up in costume for an afternoon. In addition to planning Homecoming, McCoy holds a leadership position for Project Pumpkin, co-chairing the publicity and outreach committee for the event.

“It has been fun because I’ve reached out to the same people that I reached out to for Homecoming, so I’ve sent many emails to many people on campus,” McCoy said.

Remaining in the Homecoming week is the annual bonfire on Thursday evening from 7:30 to 9:00 p.m.

“The football team will be making an appearance alongside Coach Clawson,” McCoy said. “Our cheer and dance teams, as well as our marching band, will be there to pump up the crowd, and everyone will have the chance to meet the Homecoming Court.”

The bonfire will be used for students to make s’mores, and food will be served, so all are invited to Davis Field to cheer on the football team for Saturday’s game against Army. Finally, on Friday, the tent on lower Manchester will be put to full use as The Spinners take over for “Party So Dear” from 4 p.m. to 7 p.m. Entry is free, a cash bar is available and all 21+ registrants will receive two complimentary drink tickets. Later on Friday evening, the Young Alumni Gathering will take place with MamaDear performing from 9 p.m. to midnight. Tickets are $10, and students are welcome to attend.

McCoy is excited by the opportunity to plan Homecoming week, acknowledging the reward of orchestrating a community-wide celebration that unites Demon Deacons on campus and across the country.