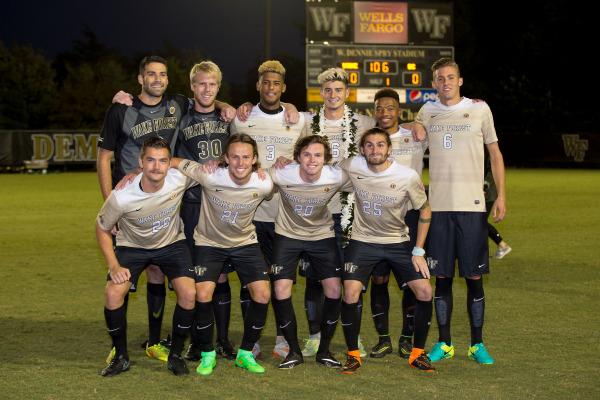 The No. 10 Wake Forest men’s soccer team ended senior night on Saturday, Oct. 22 with their 10th shutout of the season against Boston College.

They had an opportunity in the 12th minute when senior Jacori Hayes and junior Louis Argudo fired three shots in a row at Boston College goalkeeper Cedric Saladin. Finally in the 19th minute, junior Jon Bakero was able to find the back of the net for his third time this season.

Bakero got behind the Eagles’ defense to go one-on-one against the goalkeeper. He took a touch to the right to find an open goal.

“I did what I had to do to help my team,” he said. “And that is what I am happiest about.”

Goalkeeper Alec Ferrell did not have it easy this game. He tied his career high record of seven saves. This led the Deacs to 12 wins on the season for the 18th time in program history. Both Wake Forest and Boston College had close opportunities in the second half as they battled until the final whistle. The solid defensive line of senior Hunter Bandy, junior Kevin Politz, sophomore Sam Raben and sophomore Logan Gdula were able to secure the team’s tenth game of the season without allowing a goal. Spry Stadium held a ceremony before the game to honor the nine seniors: Hunter Bandy, Grant Bishop, Alec Ferrell, Tane Gent, Ricky Greensfelder, Ian Harkes, Jacori Hayes, Hayden Partain and Jared Odenbeck.

“Senior night was a great chance to recognize everything that we have achieved individually and as a class as a whole,” said senior captain Ian Harkes. “We were still very focused on the game at hand and just wanted to help the team in the best way we could.” The seniors described this day as bittersweet. They all agreed that it was hard to believe their college careers were coming to a close but are hungrier than ever to finish this season as their best one yet.

“This group of seniors has been through a lot together,” said Harkes. “This group is very unique, because no one in the class is really focused on themselves too much but are all very competitive and like to push each other and our teammates.”

The Demon Decons ended their home slate 9-1-1. The one loss came from the season opener against Saint Louis.

The team will end their regular season this Friday, Oct. 28 on the road against Syracuse. If they are able to get another win, the Deacs will win the ACC title for the second year in a row, which they were able to do in 2008 and 2009.

The seniors look to continue leading this team moving forward in the game against Syracuse and into the post season tournaments.

Syracuse is 10-3-2 on the season, and Wake Forest is focused on getting a good week of preparation and recovery in before the tough game on Friday.