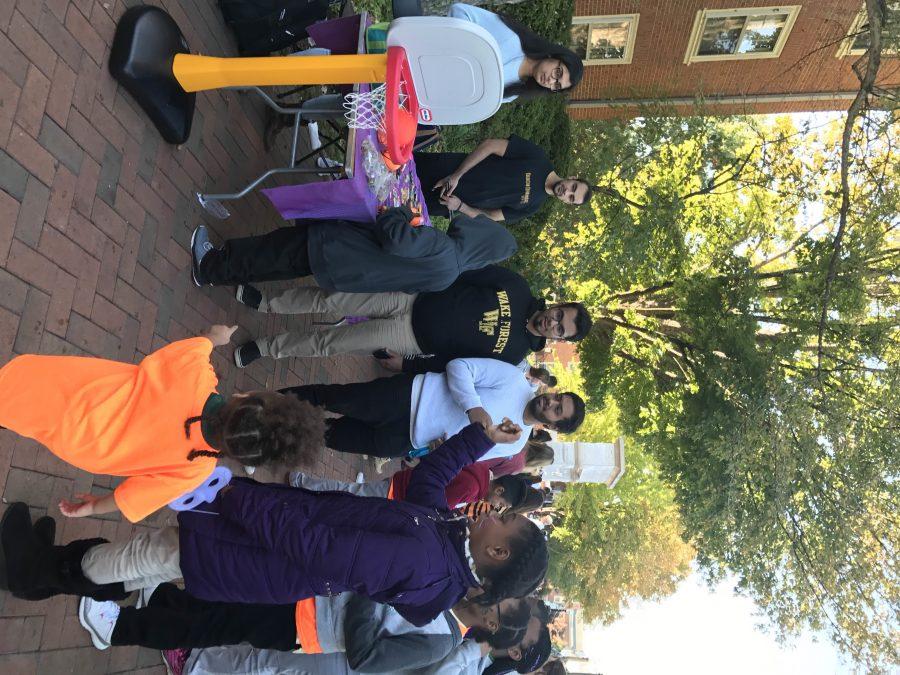 Children of the Winston-Salem community and their families celebrated the 28th annual Project Pumpkin on Wednesday, Oct. 26 on Hearn Plaza.

This year’s theme was “Zootopia” after the recent hit Disney movie.

More than 500 Wake Forest students attended the event with their respective student organizations, even more students worked as escorts or behind-the-scenes in the planning process.

Project Pumpkin resembles trick-or-treating; kids go up to different booths hosted by student organizations and play themed games to get candy. In Winston-Salem, not every family lives in a neighborhood where traditional trick-or-treating is safe, so Wake Forest began the event in 1989 to offer an alternative.

A record-breaking number of student organizations participated this year, including several Greek organizations and the Wake Forest men’s basketball team. There were more than 80 booths in total.

“It’s great that we get the chance to give back to the kids and the community,” said freshman Richard Washington. Junior Troy Rike added, “It’s a wonderful event, and it’s great to interact with the community because we are a part of the community too.”

Last year’s Project Pumpkin was moved to its rain location in Reynold’s Gymnasium, forcing close quarters and causing transportation issues for many organizations. This year, the good weather allowed for it to return the upper quad, where booths were able to take advantage of the open space.

Students of Sigma Alpha Epsilon hosted a hayride in the parking lot circle between Davis and Taylor, a new event addition for Project Pumpkin. This paired well with several haunted houses, a cookie decorating booth, seahorse races and more.

“It’s really important to interact and connect with the community we are a part of,” said Head Pumpkin Janelle Thomas. “As Wake Forest students, it’s good to engage with the community because it breaks down any boundaries that are in place, and it allows us all to bring out our inner child.”

Thomas was the lead student in charge of running Project Pumpkin this year after having been involved with the event since her freshman year.

A capella groups, dancers and the Spirit of the Old Gold & Black marching band performed throughout the event, some even while in costume. Chi Rho a capella group sang “The Lion Sleeps Tonight” in accordance with the “Zootopia” theme.

Budget-friendly costumes and animal onesies were also popular outfit choices for college students at the event. Sophomore Alex Morgan wore a Peter Pan costume which she made with green leggings and a big t-shirt.

“Being in costume really allowed me to embrace the whole spirit of the event, and it made our booth more interactive for the kids,” Morgan said. “I think that Project Pumpkin really embodies the Pro Humanitate spirit of Wake Forest.”

“Project Pumpkin is definitely my favorite event of the year,” said junior Royce Rose, who serves on one of the Project Pumpkin student committees. “It brings the community together and lets the kids come here and celebrate Halloween in a safe, friendly environment, and the students love it, too.”