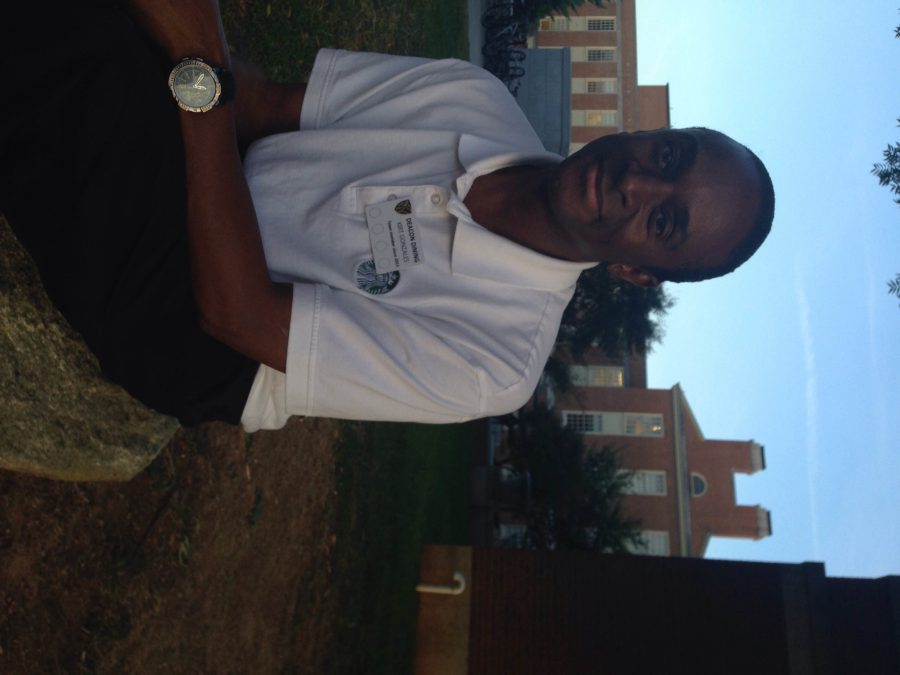 A familiar face on campus, Dr. Kirt Gonzales is much more than a Starbucks barista.

He has a Ph.D. in theology and Christian counseling from Andersonville Theological Seminary. Before living in Greensboro, North Carolina, Gonzales wrote a book about his time in New York City and the family experiences that shaped him forever.

What’s your favorite thing about yourself?

I love being able to look at myself and recognize my passion for people. I genuinely love people to the point where I have been told that my strength is also a weakness. It causes a lot of people to take advantage of me because of how much I care. In spite of people saying no, I am determined to do something.

Everyone notes how easy it is to talk to me, and that’s what I like about myself.

When I wanted to write my book, my family thought I was stupid for writing it. When I went to get my Ph.D., people asked who I was trying to impress. I always face a lot of opposition.

Part of your identity is the prevalence of domestic violence. How has this impacted your life?

I experienced domestic violence as a child. My dad left Trinidad early in my life, and my mom got involved with another man, and that was my sister’s father. He used to beat me up really badly. I remember  when I was five years old, and my mom came home to see him kicking me in the stomach against a wall. My mom dropped the bag she was carrying and jumped on him.

And then, I was eight years old when she got married. One night I was having an asthma attack, and I told my mom I couldn’t breathe, but her husband said that I would be fine. My mom argued with him, and when she tried to get up, he pulled her hair and started to beat her up.

From a young age, I felt that I always had to protect my mother. That’s why domestic violence is so close to me: because of the love I have for my mother. I really do love people.

We moved to the U.S. in 1996, and I left my sister in Trinidad where she got involved in a really bad relationship. I rescued her from Trinidad and brought her to New York to live with me, but a few months later, she got involved in another bad relationship and had a child with the man. Six years later, she decided she had enough. She told the father that he could see the child whenever he wanted but that their relationship was over.

Even though I was living in Greensboro, I still had my apartment in New York, so I let my sister live there. On Sept. 18, 2013, she left for work. She got to the house, where he was waiting outside the building.

He stopped and gave my sister’s daughters eight dollars to go to the corner store and buy some chicken. He went inside the apartment with my sister, and shot her three times. Even though she lay lifeless on the floor, he shot her three more times in the back of the head to ensure she was dead.

And then he ran. A few moments later, her daughters came home to find their mother lying in a pool of her own blood.

My mother has two children, my sister and myself. I never knew life without my sister. So I immediately went up to New York and buried my sister.

How would you explain the effect that your sister’s death had on your life after the incident?

The reason for the title, The Chauncey Street Monster, is that in New York we lived on Chauncey Street. The man who killed my sister lived in the building right next to us; we were neighbors. My sister would call him a monster all the time.

My book was released in July 2015. Fox network came to my home and had a big interview with me that they broadcasted, and they actually followed me to my first book signing, which was on television as well.

Since then, I have been traveling and doing book signings. I actually just came back from a major book tour in California, and I’m going to Toronto in December and to Trinidad in January. I’m making it my life work.

When I was in California for my book tour last week, I felt like Oprah. There were photos of me everywhere, I met the old mayor, and I met celebrities who lived in the area. But the most important part is that I was brought to speak at a panel on domestic violence. I was doing workshops and interviews with the River Community Church.

There is talk of turning my book into a stage play with students from the theater department at Wake Forest or even turning it into a movie. And I’ve actually began thinking about a plan for a second book, but I want to get this one to the largest following I can so that when I write other books they will be easier to sell.

It was the most difficult period of my life. It was so hard losing my sister but God is good. God has seen us through it. The city of New York was also so great to us; they actually paid for my sister’s funeral. They gave us a lot of money for Thanksgiving and Christmas celebrations.

Other than the book, how has your sister’s story changed your life?

Her two baby girls are now 18 and eight. I adopted the eight-year-old as my own. She’s my baby now. She is the absolute pride and joy of my life. She is in third grade now, and she’s doing great. The older one just completed her first year at UNCG.

Beyond the success of the book, how else do you demonstrate the determination you noted as a personal strength?

My true passion is tennis; I play competitive tennis. When I was in Trinidad and between the ages of 12 and 15, I was actually my country’s number one player in my age group, and I represented my country at international junior tennis tournaments.

Now I play in a mixed doubles league May through August, and we compete against other teams in the Triad. The top team then goes on to represent the Triad in the state championships. My team last year actually made it to the championships, so you could say we are pretty good. I train hard so I can work to carry the team.

Outside of my job here, I also have a private counseling practice in my office in Greensboro. A lot of my clients are from courts who are first time offenders. Instead of giving them jail time, their sentences are to receive counseling, so I help them in this way. Men and women that come to my private practice are typically ministers or pastors but also cover a huge scope of people. Sometimes, if a client has to go to court in an urgent case, I see them before I go to work. My life is busy.

After spending so much time around college students, what advice do you have for students on campus?

I have so much. I need college students to understand that all the things you think you need to get involved with in college have been around since before you were born and will be around for a long time after. Do not lose your focus just for a little bit of partying. Focus on what you need to now so you can do that after.

A lot of students lose focus, because they think they’re independent. That’s a big mistake every student makes. Focus on your school now, because you would be amazed how quickly for years goes by.