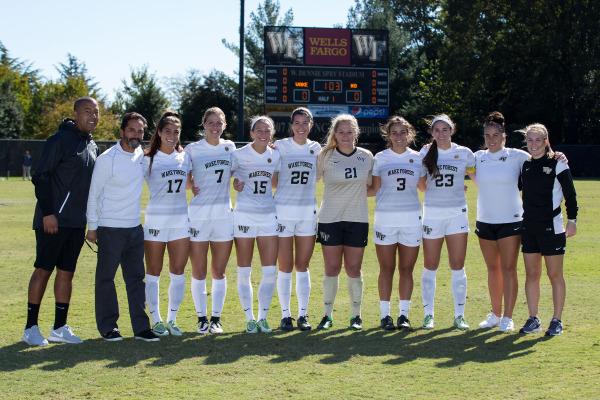 The 2016 Wake Forest women’s soccer team had a season of great improvement and persistence, but they were not able to join their more fierce conference competitors in the ACC tournament quarterfinals.

Next year, they will strive to prove themselves as a competitive member of the Atlantic Coast Conference, hoping for a more impressive conference record than 2-8.

In their last game, the Deacons fired shot after shot in the final few minutes but couldn’t put a point on the board in the regular season finale.

The Deacs lost the seemingly winnable match 1-0 and now await the Division I Selection Show on Nov. 7th.

The Deacs’ overall record improved from 5-12-2 in 2015 to 10-8 this year. Their conference record, however, remained the same. They defeated unranked Louisville and Miami last year and No. 25 Boston College and unranked Syracuse this season.

Sarah Medina and Sarah Teegarden led their team in goals, points, shots and shots on goal in 2015, but junior Maddie Huster and sophomores Peyton Perea and Bayley Feist were the team’s key players in 2016, statistically speaking, with at least five goals scored each.

These players, along with sophomore Reci Smith and junior Lindsay Preston will be crucial to the team’s development for 2017.

The Deacs will have to make major adjustments to compensate for this loss, but they anticipate a strong recruiting class, as well as intense year-round training.

While this season was better than last, the Demon Deacons must find the ability to communicate, attack the net and improve their endurance in the second half in order to be taken seriously in the most difficult soccer conference in the nation.

This responsibility lies principally on Tony da Luz, who has now been the women’s soccer head coach for 20 years.

Despite the hardships, he is extremely proud of his team and the resilience and effort they have demonstrated over the 2016 season.

Undoubtedly, Wake Forest has the drive and physicality to be in a top half team in the ACC. A drastic shift in strategy and mentality is necessary for them to move out of the No. 11 ranking in the conference of 14 teams.

The Deacs believe that this is an attainable goal and will continue practicing throughout the year to ensure that they achieve it in 2017.