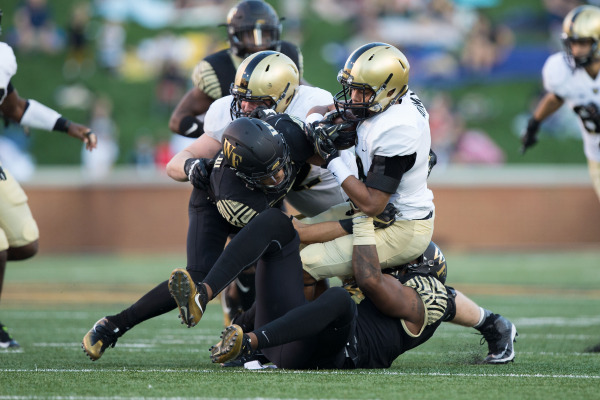 The performance and outcome can be summed up by one word: frustrating.

“To have two weeks to get ready for a team and to play as poorly as we did, I’m really disappointed in myself that I did not have my team more ready to go. We didn’t execute on so many different levels. It’s a tough pill to swallow,” said head coach Dave Clawson.

Both teams put up a touchdown early in the first half.

Army receiver Edgar Poe bolted successfully away from Wake Forest defenders and received a 43-yard pass that he turned into a touchdown.The Deacons responded with an impressive nine-play 69 yard drive that included 13 yard runs from junior quarterback John Wolford and sophomore running back Matt Colburn, ending with a three yard touchdown pass to freshman Tabari Hines, who put up a team-high of 78 receiving yards.

This was Hines’s second career touchdown, as well as the only touchdown the Deacs could manage to score against Army.

A 37-yard field goal from Wake Forest’s Mike Weaver made the score 10-7, and the Deacs gained perhaps too much confidence that they would be able to pull out a win over Army.

The Wake Forest defense was extremely solid throughout the majority of the game, allowing Wake Forest to maintain their lead until the last 12 minutes of the game.

Senior Marquel Lee performed exceptionally well with 12 tackles and five for a loss. Junior Jaboree Williams had three tackles for a loss and a nine yard sack on fourth down, and freshman Jessie Bates intercepted an Army touchdown pass at the goal line.

To top off the strong defensive game, senior linebacker Thomas Brown and sophomore defensive back Cameron Glenn each forced a fumble, one of which was recovered by junior Duke Ejiofor.

The Wake Forest offense, on the other hand, looked weaker than ever.

“Overall we did not play well enough on offense, myself included,” said junior quarterback John Wolford. “I continued to turn the ball over and I can’t do that. There was bad communication out there.”

Wolford overthrew a number of passes, racked up three interceptions, and recorded one of his worst career passing records: 23 completions for 43 attempts.

They maintained this unsuccessful passing strategy throughout the game, focusing less on rushing.

The Deacs recorded their shortest time of possession of the 2016 season against Army, only managing to control the ball for 24 minutes and three seconds.

“Obviously, really disappointed. I give all the credit to Army,” Clawson said. “I thought Coach Monken had all his guys ready to go. They got after us. They had a great plan.”

The Black Knights scored two rushing touchdowns on consecutive drives in the fourth quarter. Wake Forest’s most promising opportunity for a touchdown came in their last drive.

A few passes to sophomore Alex Bachman and redshirt sophomore Cortez Lewis got the Deacs just inside the red zone, but overthrown first, second and third down passes eliminated any chance to score. “Offensively, we had made improvements through the middle of the season, and we’re starting to regress. We’re not making plays,” Clawson said.

Fortunately, Weaver was able to make a 34 yard field goal, resulting in the final score of 13-21.“I feel like we got kind of lazy throughout the week,” said defensive back Jessie Bates. “It’s just the bye week, and some people got kind of bored with it. That showed up tonight.”

After an intense week of practice, the Deacs will move forward on Saturday to take on University of Virginia at 3p.m. at BB&T Field.