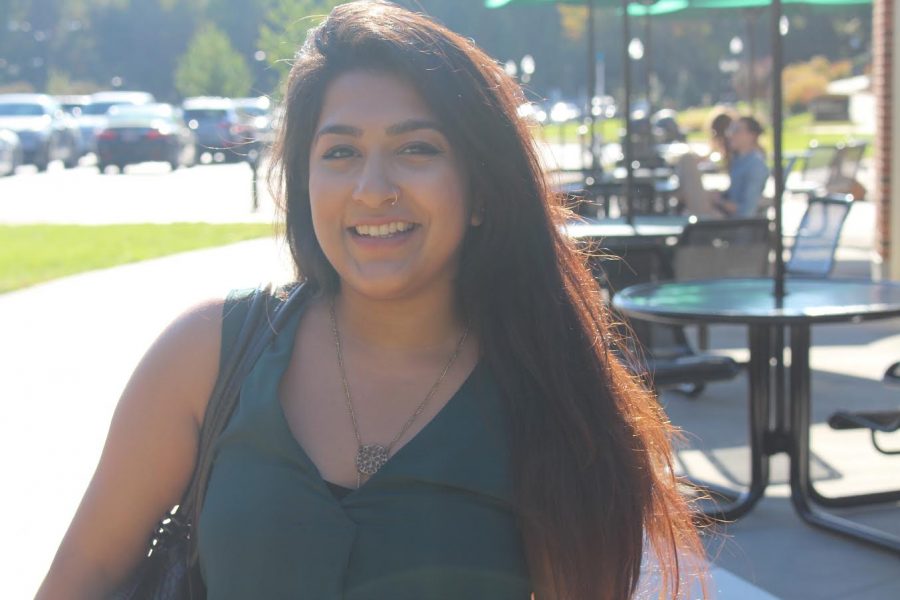 Aishwarya Nagar took a leap of faith as a senior in high school when she was deciding where she wanted to attend college.

In her hometown of New Delhi, India, she was surrounded by peers who had known exactly what they wanted to do with their lives since 10th grade.

Nagar knew she wanted to study biology but longed for a liberal arts education that would allow her to explore her other passions as well. Without ever having toured the campus, she hopped on a cross-continental flight to her new home of Wake Forest University in 2012.

Fast forward four and a half years, and she is now a member of the Wake Forest Fellows, a mentorship program for recent graduates that allows them to work for a year as full-time administrative staff. She is the first Wake Downtown fellow, working to assist the development and implementation of the biomedical sciences and engineering curriculum in the Innovation Quarter.

She originally applied to several fellow positions in offices such as Campus Life and the Provost’s Office but recognized an opportunity that better aligned with her interests in the new Wake Downtown position.

“It was a right place, right time situation,” Nagar said. “Wake Downtown ended up needing a fellow, because determining the logistics and launching the program needed more helping hands than originally anticipated. I couldn’t refuse the opportunity to marry my interests in STEM and collaborative programming.”

Aishwarya works directly under Rebecca Alexander, the director of academic planning for Wake Downtown, as well as Samantha Perrotta, event and project manager in the Office of the Provost.

Aishwarya described her typical days as chaotic and full of activity.

“I go where I’m needed, so I don’t have much of a routine,” she said. “Overall, my tasks revolve around increasing engagement with students and faculty and creating awareness of all that’s happening with Wake Downtown. I also facilitate connections with the medical school. Basically, I’m helping to plan for everything that determines whether the building will be open in time.”

Aishwarya’s work includes a wide range of recent projects, from running social media to organizing a furniture showroom to coordinating the transportation of equipment for labs moving downtown, ensuring incubators or deep freezers are being moved at the right time and in the right way.

“The big picture has already been decided for the most part, and some people are working on the real nitty-gritty, so I get to work right in the middle of the two,” she said.

“I never know what will be next. In one meeting I might be with the construction team, electricians and project managers. But I also have leadership lunches with individuals like Provost Rogan Kersh and hop on hard-hat tours of Wake Downtown alongside people like President Nathan Hatch and Donna Boswell.”

“From joining our team in July, Ash has been a key component in all of our logistics conversations, from coordinating the move to furniture and equipment procurement to creating a true Wake Forest experience at Wake Downtown,” said Perrotta, Aishwarya’s supervisor in the Office of the Provost. “That is the place we are in now — getting ready for the first day of classes on Jan. 10, which means a lot of detailed, focused work.”

“Aishwarya does so much for us,” said Alexander, who is in charge of the academic side of planning for classes downtown. “She is constantly going back and forth from the Innovation Quarter to campus — she has to have a desk in both places.”

Aishwarya said that her work so far has been “ridiculously collaborative,” with decisions constantly made through a process of people bouncing ideas off of each other. She added that her job now, primarily focused on preparation for next semester, will be entirely different from her work next semester when Wake Forest classes actually begin downtown.

“I’ll almost have two entirely different jobs,” she said. “In the spring, my focus will shift to branding, programming and outreach.”

Aishwarya often visited downtown as an undergrad, frequenting Camino Bakery as a study spot and doing research in Innovation Quarter over the summer, as well as participating in numerous service projects with downtown nonprofits.

Aishwarya said that she hopes that taking classes in the Innovation Quarter will allow students to expand their horizons beyond the “Wake Forest bubble.”

“Once I became emotionally invested in Winston-Salem, it completely changed my Wake Forest experience,” she said. “It contextualizes where your position is with regard to the larger community of which you are a part. The bubble is so real, and Wake Downtown is an opportunity to get outside of it.”

“I would love to see this program lead to an emotional attachment to the community from Wake students and greater engagement with community service in downtown Winston-Salem.”

Aishwarya said that she believes the university’s decision to expand downtown is a positive one.

“It’s going to benefit a lot of people on campus, especially STEM students with a strong interest in engineering, medicinal chemistry or molecular biology,” she said. “I took organic chemistry lab in Salem, and I was touching elbows with my partner the whole time. It was incredibly uncomfortable spending hours in that dark room. Now, students will have massive open windows with an excellent view of downtown and upgraded facilities. It’s going to be so beautiful.”