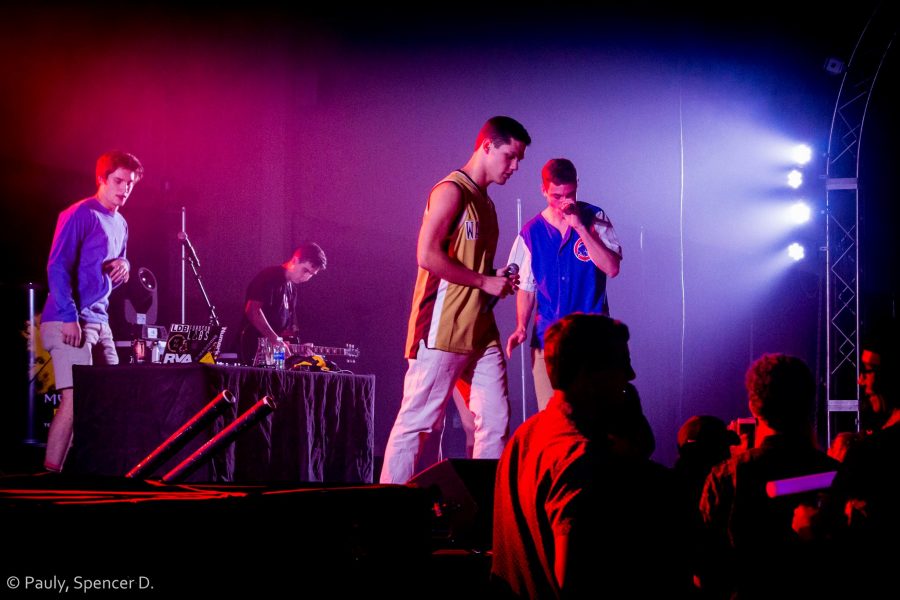 Cash Cash, a popular electronic dance music group, performed for students at the education building of the Winston-Salem Fairgrounds on Thursday, Nov. 3 at 10 p.m. on an exclusive tour stop earned through the crowdfunding website, Tilt.

Cash Cash is touring with “Monster Energy Outbreak Presents: The Up & Up Festival,” one of six annual tours designed to showcase the next big artists in many genres, including Kendrick Lamar, Macklemore, Iggy Azalea, The Chainsmokers, Cole Swindell, Bullet For My Valentine, Logic, Issues and Fetty Wap in previous years.

While Cash Cash headlined the performance and proved to be the show’s main draw, Gio Alexiz, Fordson Labs, DJ HEK YEH,and other students opened with a unique set that entertained and energized the crowd as it grew in anticipation of the group.

The opening set began with student DJ Gio Alexiz, better known off-stage as freshman Giovanni Continanza, whose performance marked the first time he took his talent from fraternity parties to the stage. Gio Alexiz’s set was widely anticipated and promoted by Wake Forest students via social media. His music selection was pulled from several different genres, providing an unexpected sound that encouraged the audience to dance and sing along.

Gio Alexiz — who has been writing his own songs and producing his own tracks since he was 12 years old but has just begun to explore the skills of live performance like beatmixing and reading the mood of a crowd — gets much of his inspiration from EDM festivals and their loving, fun and supportive atmosphere.

“All in all, the connection you can establish with people though music is what really inspires me to keep working hard at what I love,” Gio Alexiz said.

Gio Alexiz plans to release his first official EP in January. He typically shares his music through his YouTube channel, but he plans on having his mixes available for streaming on Soundcloud, Spotify and Apple Music in order to build his following.

The student DJ, who has received advice from the Chainsmokers and who has been mentored and supported by NGHTMRE, Adam Foster, DJ HEK YEH, ILLRACE, DSOUNDZ, DJ Shift and Cash Cash, suggests that other aspiring musicians stay patient as they grow and reach out to established talent for advice.

“I would say to start small, and do not rush the process.”

Performing next was Fordson Labs, a student hip-hop duo from Richmond, Virginia, that formed in May 2012. Their raw, high energy performance stood out among the EDM sets that dominated the rest of the night, and their vocals shined, resonating with audience members as both memorable and able hold their own within the mainstream hip hop scene.

Consisting of long-time friends Paul Cartier “The Cartier” Ward, a student at Virginia Tech who goes by Carter among friends, and Coleman “King Cole” Greene, a Wake Forest student, who met playing little league baseball, Fordson Labs began as DJ duo Access Denied. Both members were both experimenting individually with making hip-hop music and began collaborating under the new name, chosen for the location where the duo records its music, Fordson Road in Henrico, Virginia, in the summer of 2015.

“It has been really cool to see how Carter and I have evolved as both artists and part of a team,” Coleman said. “Carter is a very talented producer and really a student of the art. His work ethic is incredible and he is able to focus in ways that I cannot. I pride myself in handling a lot the artistic direction of our album covers, shows, posters and branding. It has been exciting to see many facets of art come together to create Fordson Labs.”

Although it has been challenging for the duo to be separated while attending different colleges, they have doubled their fan base.

Fordson Labs is unique in the ways in which it incorporates others into its sound, including many students providing instrumentals and vocals.  While the duo has collaborated with producers like IAMNOBODI, J1K and Felly for past EPs, Ward plans to produce the entirety of their next project, Dove Season, coming this fall.

The concept for the upcoming “Dove Season EP” stemmed from the duo’s reflection on their transition to college.

“My name, Coleman, means ‘Keeper of the Doves,’” Greene said. “When I began to make music, I began to infuse the dove theme into my songs. I have had two projects in the past, ‘Keeper of the Doves’ and ‘Ode to a Dove,’ that focused heavily on this subject. To me, the dove is a perfect example of majesty, peace, and new beginnings. As Fordson Labs grew, the dove became one of the symbols that we reference and you will see on our shirts.”

The duo’s music is influenced by innovative and lyrically-gifted artists like Kendrick Lamar, Anderson .Paak, Felly, Frank Ocean, J. Cole, Chance the Rapper and Sam Cooke, but hip-hop is not the only genre from which Ward and Greene draw inspiration.

“I draw a lot of my inspiration from old hymns as well as folk music,” Greene said. “I believe that hymns, folk music and rap music are all have a goal to tell a story, make a connection and display emotion.

While the duo has performed at a variety of venues, they still agree that their favorite performance is the one that kicked off their journey, a 500-person show in Ward’s backyard during Halloween of 2016.

Although opening for Cash Cash marked the first time the duo performed where they were not the headliners, they felt as though the show provided the opportunity to introduce a new audience to the sound and ability of Fordson Labs.

Bryan Short, known on stage as DJ HEK YEH, was the last performance before Cash Cash took the stage. His performance, which was fast paced and energized the audience with popular hip hop tracks, was the perfect transition from the Fordson Labs set back into a dance party atmosphere.

DJ HEK YEH, who is from Kentucky but currently resides in North Carolina, was Ziggy’s first resident DJ and has been a touring DJ since 2012, playing shows with Steve Aoki, Waka Flocka, 2 Chainz, Snoop Dogg, Travis Porter and more. He has also provided services for high-profile athletes, including Chris Paul.

“Opening for Snoop Dogg in front of 4,000 will always be the most memorable performance of my career up to this point,” DJ HEK YEH said.

While primarily a performance DJ, DJ HEK YEH also produces remixes, bootlegs and edits, available on his audiomack page. The successful performer emphasizes professionalism and business savvy in succeeding as a resident and performance DJ.

“Being unique and professional will go along way in gaining a network and fans,” DJ HEK YEH said.

“All young DJ’s and musicians should want to learn how to be a good business person because nobody will believe in you more than you will believe in you.  Always be friendly and professional with everyone you meet; you never know how their day is going, let alone who they may be or know.”

The dance music trio is currently promoting thier debut album, “Blood, Sweat & 3 Years,” which landed the No. 1 spot on the iTunes Dance Chart the week of its release. It includes the group’s 2014 worldwide platinum hit, “Take Me Home” and features from Busta Rhymes, Christina Perri, B.o.B, Jacquie Lee, Trinidad James, John Rzeznik and more. Their set drew a large crowd.

Cash Cash was the main act of the night, drawing a large crowd and creating a fun atmosphere for students; however, it was truly the opening acts that stole the show.