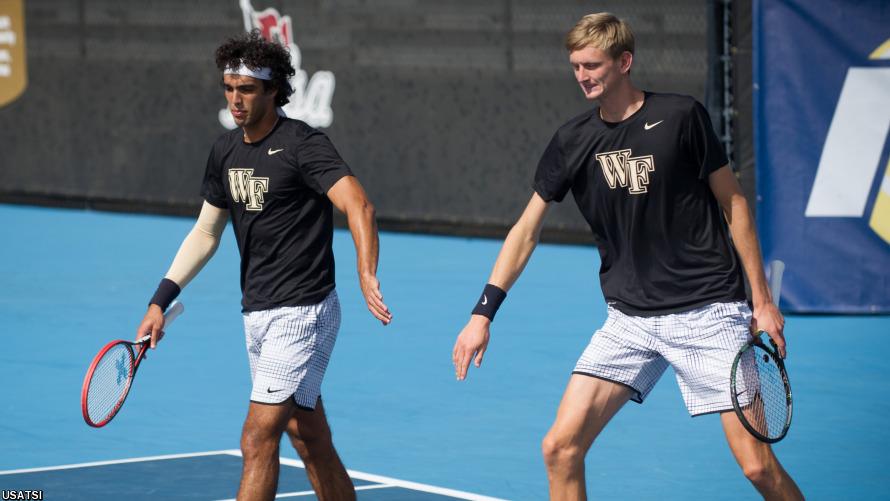 A complete triumph. Juniors Skander Mansouri and Christian Seraphim beat No. 55-ranked Jeffrey Schorsch and Charlie Emhardt (Valparaiso), earning the Indoor Intercollegiate Tennis Association Championship (ITAs) for the first time. This victory arrived after a semifinal finish at the ITAs less than a month ago.

More impressively, they defeated ranked opponents all the way to the first place prize, confirming their impressive reputation at a collegiate level.

As the only tournament on the ITA calendar to showcase elite players from every level of college tennis, the United States Tennis Association National Indoor Intercollegiate Championships serves as the culmination of the fall season.

Without a doubt, the current state of form of the Mansouri/Seraphim duo is incredible, and particular attention should be paid to the pin point accurate serves of the Deacon big hitting duo.

They have been annihilating opponents with serves both powerful and accurate; they are playing ideal tennis ensuring that whatever returns come their way (due to their serves, not many tennis balls come back), they hit back for easy points.

This was a difference maker in the second set of the final, which they won 7-5 in a nail-biter ensuring the win.

Skander Mansouri, from Tunisia, reflects upon the factors that have influenced the forming of our strong doubles team:

How do you stay competitive with a roster that continues to grow in depth?

I think self-esteem is very important. We all love each other on the team, but we are also very competitive and every one of us wants to be the best. Having a roster that continues to grow in depth can only push us even more and I embrace that.

When you are tired and just want to rest, seeing your teammate going the extra mile makes you want to continue to practice; you never want to be the one who quits first. We keep lifting each other up.

I think it is very important to realize and believe that you get out of it what you put in it.

Despite from what many people think, for me, school and tennis go hand in hand. Doing well at school helps me take some pressure off and do well at my sport.

Have you always been a doubles tennis player? What is the key to finding a good playing partner?

I have always loved playing doubles; I think it’s a great feeling to share the same emotions with a partner.

The most important thing is to find a partner that you get along with, that comes way before the game style.

What aspects of your game would you define as the weakest? In other words, does playing with Chris make up for these “not as developed” skills?

I would say the return games is probably the area where I can improve the most.

Since Chris and I are both big servers, we do not give many chances to our opponents on our service games.

As a consequence, we try to put as much pressure as we can on their service games, and we can see that it worked last week.

This last aspect is ironic, isn’t it? Opponents simply have to return the ball, in order to have a better chance at beating our Demon Deacon doubles team.

All they have to do is to catch up and attempt to return that three digit serve.