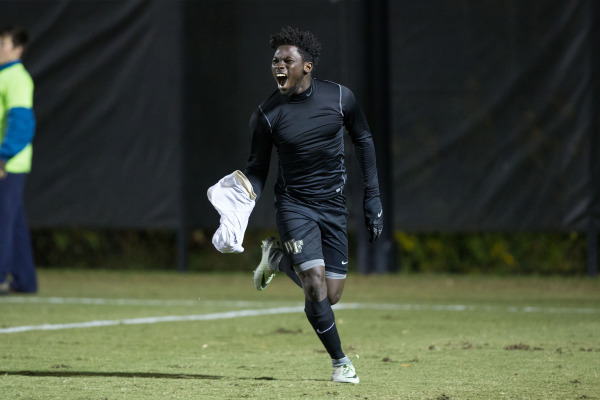 The Wake Forest men’s soccer team earned a spot in the ACC championship game this Sunday, Nov. 13 for a chance to win the tournament for the first time in 27 years.

The Deacs came away with a victory over Notre Dame and Louisville this week. They beat the Irish 1-0 and defeated Louisville 2-1 in overtime.

“The ACC championship trophy is the hardest to win in college soccer,” said head coach Bobby Muuss who is excited for the opportunity to fight for this trophy on Sunday, Nov. 13 at 2 p.m against Clemson.

On this past Sunday, Nov. 6, senior Jacori Hayes scored the game’s only goal against the Irish in the 75th minute of play. This was his sixth goal of the season. He fired a shot from inside the box that curved just inside the upper right hand side of the net. His shot was well out of the reach of Notre Dame keeper Chris Hubbard.

Wake Forest dominated possession from the opening whistle and finished the game with a 14-4 shot advantage.

Redshirt senior Alec Ferrell was asked to make just three saves during the game, which was his eighth shutout of the season. It also marked his 22nd career shutout.

The game against Louisville on Nov. 9th required more action from Ferrell and the defensive line.

Head coach Bobby Muuss described Louisville as “an incredible attacking team.” They had possession for a majority of the game, starting from the beginning, and the ball remained on their attacking half of the field throughout. They had an advantage in 11 shots taken to five. Though Louisville maintained possession, Senior Hayden Partain was able to find the back of the net in the the 29th minute. He had just come off the bench as the first substitution of the game. He shot the ball from inside the box into the lower left-hand corner of the goal.

“I just opened up and trapped it,” Partain said. “It was a pretty surreal feeling because it was one of my first touches of the game.”

While the crowd in Spry Stadium thought the Deacs had won the game, Louisville was able to answer back in the 90th minute of play off of a shot from inside the box that they slotted past goalkeeper Alec Ferrell.

Head coach Bobby Muuss viewed this goal as “a real wake up call.” This play forced the Deacs into overtime.

Freshman forward Ema Twumasi relieved the team and the crowd with his goal in the first minute and a half of overtime play. Junior Jon Bakero tapped the ball with the back of his heel to Twumasi running towards the goal. He took a touch to get ahead of the defender and dribbled past the goalie to find an open net.

“It really felt great,” Twumasi said. “I really just wanted to end the game and make the team and fans proud.”

The seniors led the team throughout this game both from the bench and on the field. The win was a true team effort that showed resiliency, belief and composure.

“I am so excited for this team to create memories that are going to last  a lifetime and to continue creating our own history,” Muuss said. The Deacs will face Clemson this Sunday at 2 p.m. for the ACC championship in Charleston, S.C.

This is their first ACC final since 2007.