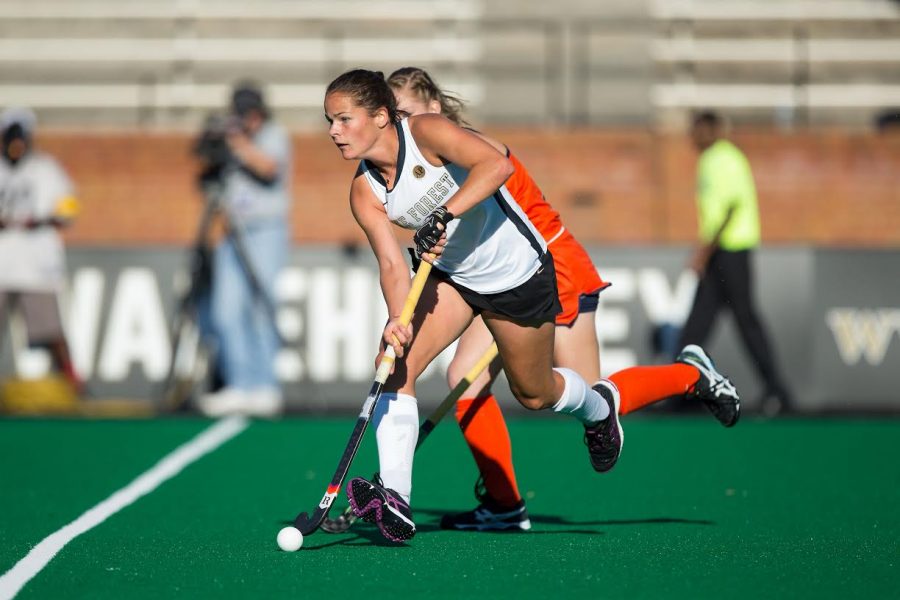 Nicola Pluta (34) of the Wake Forest Demon Deacons pushes the ball up the field during first half action against the Virginia Cavaliers in semi-final action at the 2016 ACC Field Hockey Championship at Kentner Stadium on November 4, 2016 in Winston-Salem, North Carolina. The Cavaliers defeated the Demon Deacons 3-2 in overtime. (Brian Westerholt/Sports On Film)

They ultimately conceded just 2 minutes into overtime, a heartbreakingly abrupt end to a season that saw Wake Forest exceed expectations and overcome adversity at every turn.

Not many players represent the fighting spirit and character of their team as well as Wake Forest redshirt senior forward Madi Julius.

“To come out here and beat the No. 2 team and then turn around again and take another great opponent into overtime after being up the entire game, I think that just shows that we peaked at the right time and unfortunately didn’t get the result,” Julius said after the game. “I would say that with Wake Forest field hockey, the culture remains, and we fight no matter what. This is a great weekend, and though my career here has probably come to an end. I’m leaving very, very proud and fulfilled.”

The loss came just a day after the Deacons took down the No. 2 ranked Syracuse Orange in the ACC Quarterfinals, an upset that solidified Wake Forest’s confidence that the team was peaking at the right time. With the sheer number of quality teams and players in the ACC, however, every game presents a unique challenge, and every player has the ability to turn a game in a matter of seconds.

“Unfortunately, we let two Virginia players really hurt us, but for the majority of the game plan outside of that scenario, we executed brilliantly, and I couldn’t be more proud.” said Wake Forest head coach Jen Averill after the loss against Virginia.

Wake Forest took an early and vital lead against the Virginia Cavaliers with a 10th minute goal from sophomore forward Jule Grashoff, who paced the offensive effort for the Deacons throughout the game with her five shots and two goals.

After a Cavalier goal in the 25th minute to equalize the score at 1-1, Grashoff once again put Wake Forest on top in the 37th minute off of a penalty corner assisted by Megan Anderson and Jessy Silfer. That lead wouldn’t last, however, with Virginia’s Tara Vittese knocking in a second goal for the Cavaliers in the 56th minute that would send the game into overtime.

Vittese’s goal in overtime sent Virginia into the championship game, where they would take their first ACC Championship in a 4-2 victory over North Carolina.

The goal also knocked Wake Forest out of the tournament and greatly diminished their chances of an NCAA Tournament berth, effectively ending their season.

Averill had nothing but praise for the leadership that her senior class displayed throughout the trying season, which saw Wake Forest lose multiple players to injury and other reasons, requiring reserves to play starter’s minutes and starters to play different positions.

“This senior class definitely embodies our acronym, which is CPR — your Character drives the Process which will get you your Results.” Averill said. “They didn’t get the results that they wanted today, but long term, in life, the way they’ve lead this team and the way they’ve carried themselves as student athletes and ambassadors for this university, I couldn’t be more proud.”

There is a bright future for the Wake Forest field hockey program.

Grashoff scored three times in the two ACC Tournament games and will be a force to reckoned with in the ACC for the next two years.

“If you give Julius an opportunity to go one-on-one and you give her open space, and you set her up, she’s going to be unbelievably successful,” Averill said. “We’ve got great youth on this team.”

Freshman forward Nicole Pluta is another bright spot on the Deacons.

Recently named ACC Freshman of the year and to the All-ACC First Team, the Deacs hope Pluta will continue her dominance at Kentner Stadium for the next three years.