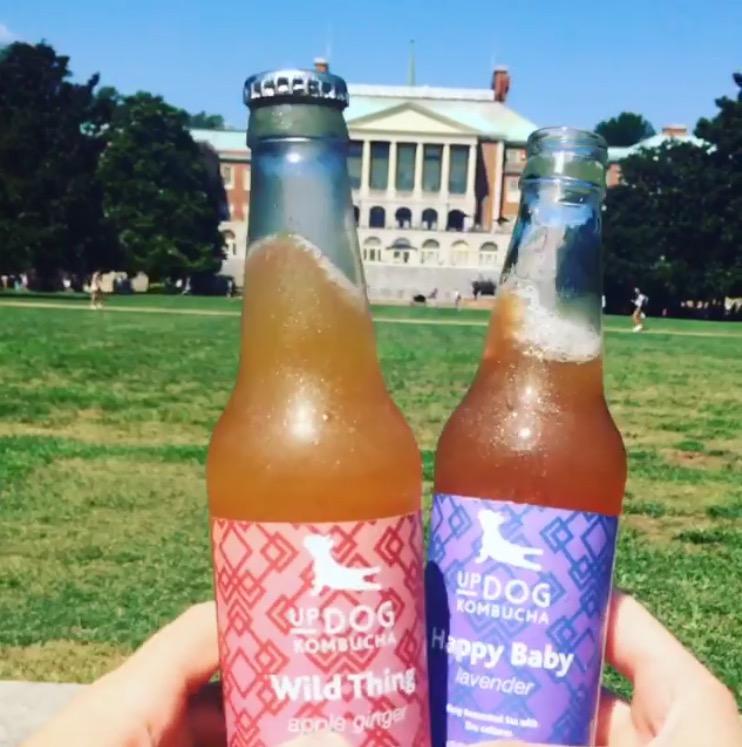 While students’ taste buds are happy about upgrades to the Campus Grounds menu, our stomachs aren’t the only ones benefitting from these menu additions.

Conventional food distribution is responsible for five to 17 times more carbon dioxide than local and regionally produced food, meaning local purchases drastically reduce our carbon emissions through shorter drives to purchasers, according to research from Columbia University. Many individuals are now choosing to purchase local as a part of their personal sustainability practices.

One of the most successful vendors at Campus Grounds is UpDog Kombucha, a local brand of fermented, enzyme-producing teas, that “support strong digestive and immune health,” according to their website.

Olivia Wolff, co-founder of the brand and Wake Forest alumna, said their partnership began when she wanted to test a new model of renting kegs to their vendors. In the first three weeks, they have sold 14 kegs of Kombucha — over 2,000 cups — in addition to hundreds of glass bottles in Campus Grounds.

“This has made UpDog a lot more accessible to students who can’t get off campus,” Wolff said. “It’s being received really well.”

Many students would be surprised to know how environmentally impactful their decision is to support local vendors and farmers.

According to Columbia University, most consumers could reduce their total carbon emissions by four-to-five percent by buying local food.

“Our facility is off Robinhood Road, about eight to 10 minutes from campus,” Wolff said. “Me and Lauren make everything ourselves.”

Supporting businesses right around the corner, like UpDog, makes a big difference, especially at a large campus like Wake Forest.

Cameron Waters, a peer mentor of Wellness and Mindful Consumption in the Thrive office, feels that students are largely unaware of the impact of their diet choices.

“At Wake Forest particularly, in terms of mindful consumption, people don’t know where their food comes from at all,” Waters said. “People will just blindfully take what they are given.”

In an effort to help students increase the sustainability of their habits, the school has increased its green efforts, especially in food services.

Ally Hellenga, the communication and events coordinator in the Sustainability Office, takes pride in the school’s sustainability efforts.

“Aramark has and continues to take strides to incorporate fresh, whole foods that are raised, grown, harvested and produced locally and/or sustainably wherever possible,” Hellenga said.

According to their website, Aramark has implemented initiatives such as local purchasing, recycling and trayless dining to limit waste on campus. With nearly 8,000 graduate and undergraduate students, plus thousands of faculty and staff, small changes like trayless dining halls make a big impact.

Similarly, UpDog believes it is their prerogative to reduce waste as much as possible in their manufacturing process.

“We have recyclable kegs, which are pretty revolutionary,” Wolff said. “As opposed to steel kegs, which you have to clean with chemicals and tons of water … you can just put it in the recycling.”

Many consumers appreciate the difference.

Kate Shapiro, a sophomore from San Diego, noted that for her personally the health benefits from their locally sourced and organically grown ingredients make the difference for her.

“I enjoy it and it’s healthy,” Shapiro said. “I also like being able to help out local eating establishments.”

Shapiro said she was willing to pay the added price to buy local whenever possible.

Despite the recent success of UpDog, it is hard to tell if students will be willing to pay these premiums in the long run.

“We all need to be asking where the food we eat comes from and make dining decisions based on the values that are important to us,” Hellenga said.