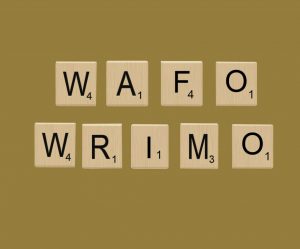 Why do we write?  Academic writing, of course, is essential and unavoidable in the “Work Forest” environment.  But why else?

Psychiatrist Victor Frankl argues that we write in search of meaning, because without meaning or purpose, life is unbearable.  George Orwell believes the motivation is egoism, or “the desire to seem clever, to be talked about, to be remembered after death, to get your own back on the grown-ups who snubbed you in childhood, etc.”

Whether you write to escape, expose, to inspire or express, there is a new opportunity to do so.

The ZSR library, in collaboration with the Writing Center, the Office of Professional Career and Development (OPCD), Library Partners Press (LP Press) and WFU Press, has launched Wake Forest Writing Month, or WaFoWriMo.

“This is about developing a community of writers on campus and providing the resources and services that can nurture that culture,” said Meghan Webb, ZSR reference services coordinator and WaFoWriMo’s driving force.

“We are trying to create an excitement around writing — whatever that looks like for students — whether that’s really writing a novel in the month of November or working on a smaller creative piece,” said Laura Denlinger, administrative assistant of the Writing Center.

The project’s first installation was a drop-in workshop on Friday, Nov. 4.  Students were fueld by coffee and snacks, online and book resources and writing prompts and games.  Every 15 minutes, Webb and Denlinger led guided writing challenges.

One was the “found objects challenge,” in which Webb and Denlinger displayed objects — like a poker chip, raccoon skin hat and compass — and invited students to craft a story around one.

According to Webb, it was the success of Writers Camp that incited the conception of WaFoWriMo.

“WaFoWriMo is picking up where that program left off,” Webb said.  “We realized we have a group of students here on campus that are really engaged in creative writing and looking for opportunities where they can further develop their craft.”

Thirty-four creative works emerged from Writers Camp and were published in a book, “Wake the Artifacts: Student Writing from Wake Forest University’s Special Collections,” available in the collections or online in eBook format (LP Press, May 2016).

WaFoWriMo’s next workshop, which is open to all students, will address the publishing process.

“WaFoWriMo is not just about how to start writing, but how do you keep writing, how do you give and receive feedback and how do you put your work out there and try to get it published,” said Ryan Shirey, the director of the  Writing Center.

Representatives from LP Press, a campus partner, will address self-publishing, or independent publishing, with the students.  Several published student authors will also speak, including sophomore Abby Trombley. Trombley is the author of “Mind the Gap: A Guide To Gap Years From Someone Who’s Survived One.”

“I tell students always to be tenacious when asking for help,” Trombley said.

During orientation her freshman year, Trombley connected with LP Press through the OPCD.  She then completed her book, and after several months of suggestions and edits from LP Press’ William Kane, her book was published in January 2016.

“It seems like a big deal, but it’s really just about taking the risk and reaching out to people,” Trombley said.

According to Shirey, students should take a similar approach to creative writing.

“Just do it,” he said. “There’s nothing scarier than the blank page.”