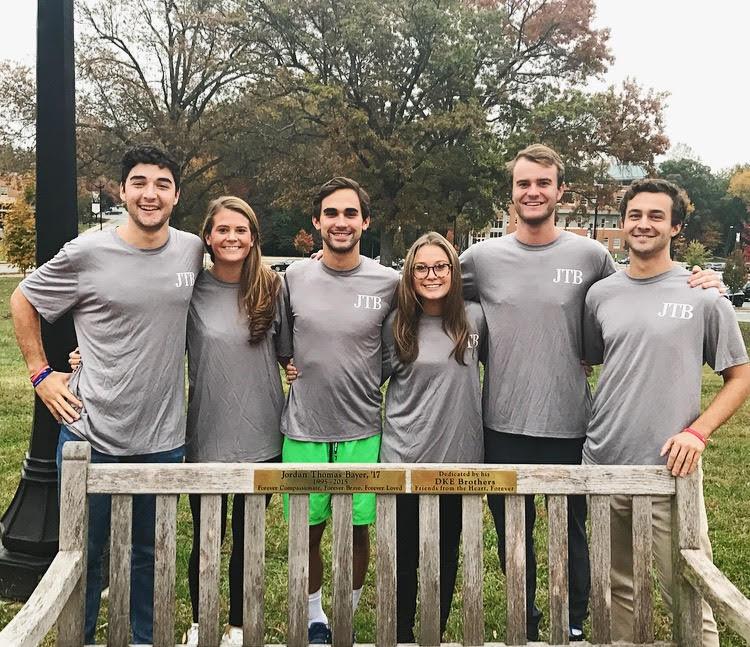 Jordan Bayer’s brilliant smile stretched to all corners of campus, touching the hearts of friends, faculty and alumni.  While Sunday, Nov. 6 marked the one-year anniversary of his passing, Bayer’s generosity and selflessness is echoed in the benevolence of the Wake Forest community.

Through fundraising events and generous donations, the campus continues to remember Bayer, who died after a tragic car accident last fall of his junior year. The Jordan Bayer Fund, a scholarship created in his memory, continues to grow towards its goal of $100,000 in seven years. Currently resting at $32,000, the Jordan Bayer Fund is 32 percent of the way in its first year.

“He embodied everything a Wake Forest student should be,” said Austin Bauersmith, president of Delta Kappa Epsilon, Bayer’s fraternity. “He was very involved with the fraternity, excelled academically and was genuine and generous. You wouldn’t have to ask him for help; he always offered.”

Six current Wake Forest undergraduate students and one recent graduate ran the New York Marathon in honor of Bayer this past Sunday. Their 26.2-mile race celebrated Bayer’s life and raised $24,715 for Sloan Kettering Cancer Center. With every step toward the finish line, the team’s name “A mile for a smile,” reminded the runners of Bayer’s enthusiasm for life.

“Whenever I had doubt, I would automatically think of Jordan,” said senior Maisie Noesen of the race’s challenges. “I knew he would be so proud of us, looking down on us with a huge smile like he would.”

The group was first inspired earlier this year when senior Sydney Rivers, who had previously ran the New York marathon in 2014, suggested they train for the marathon together.

“I looked at the date and saw the marathon would be on Nov. 7, 2016. I knew right away that was the one-year anniversary of Jordan’s death,” said senior Grant Wissak. “Jordan loved to run; whenever he was stressed, it was his go-to thing. Could there be a more beautiful way to honor him? I was definitely thinking of him the entire day.”

Several of the “A mile for a smile” team members trained together in the months leading up to the race. They frequented Salem Lake, a seven-mile loop near Winston-Salem State University. The team included junior Christian Parfit, junior Nick Arundel, and senior Jake Moross, along with Rivers, Noeson and Wissak.

“Training was the hardest part of running the marathon, but we truly celebrated Jordan on the day of the race,” Noesen said. “Turning something so tragic and sad into a true celebration was the best feeling. During the race, whenever one of us was falling behind, we would just give each other a little smile or put out a hand and say a word of encouragement. Friendship is really what pushed us through the tough times.”

Over Homecoming weekend, on Friday, Oct. 28, the brothers of Delta Kappa Epsilon hosted a golf tournament in Bayer’s honor. Held at Tanglewood Park in Clemmons, North Carolina, Birdies for Bayer raised $12,000 for the Jordan Bayer Fund.

“Our goal for this tournament was to make this tragic situation something more hopeful,” Bauersmith says. “This allowed us to make a concrete donation in his name.”

Students, faculty, alumni and the Bayer family were in attendance. An additional 50 guests joined the golfers for a reception after the tournament.

“Jordan was a big golfer,” Wissak says. “Birdies for Bayer is going to be an annual event, so people will have a chance to donate on the Friday of Homecoming each year.”

Today, a bench donated in Bayer’s honor is located outside of Farrell Hall. On Sunday, friends, classmates and faculty visited the bench and left flowers in remembrance.

“Whenever you lose someone, it’s important to honor their legacy in a positive way,” said senior Emily Upson. “We’ll all go on from here, and we have so much ahead of us. Jordan doesn’t have that, so it’s important that people remember his life and channel his character.”

Despite the successful fundraising events, loved ones continue to mourn the loss of a friend and remember “Baby J” fondly.