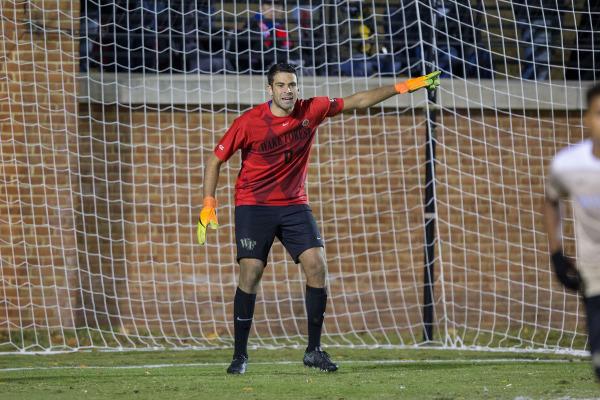 Redshirt senior goalkeeper Alec Ferrell has been the rock of a Demon Deacon defense that has a claim for the best in the country.

After missing the first five games of his senior season due to injury, Ferrell has come back to lead the Deacs to an ACC Championship, Wake Forest’s first in 27 years.

Ferrell has only allowed eight goals throughout 15 starts this season, and his .869 save percentage this year is a career-high.

With eight shutouts on the year, Ferrell is a brick wall and a confidence boost in net for the Deacons.

What does the ACC Championship mean to you and to the team?

For the team, it’s the first time we’ve done it in 27 years, and that’s really big-time.

We talked about it since I’ve been a freshman here; winning that trophy has been the most elusive for us. I personally think it’s the hardest trophy to win in college soccer, because every single game you’re going to get a top-15 team.

You just have to deal with it and find a way to win the game. I thought we did pretty well with it, and we’re pretty happy.

Has this season been any different in terms of team dynamic and technically on the field?

Every season is different.

I think it’s night and day from my freshman year to this year, and that’s because of personal development. The team has really gelled together.

The captains have done really well to keep the team gelled together as one unit.

My first couple of years, we were all spread out and had our own cliques.

Now we’re all in one unit, and that has been a key to our success.

How have you evolved as a player?

I came in and didn’t get a lot of playing time.

There was a senior ahead of me, Michael Lisch, and I learned a lot from him.

I had a lot of competition with Andrew Harris, a fantastic goalkeeper and one of my best friends.

It’s really just been the work behind the scenes: getting in the weight room, doing extra work and getting extra fitness. It’s something I really wanted to excel at.

How is this team preparing for the NCAA tournament? Is it any different than last year?

NCAAs are obviously a different animal because there’s a little more pressure. If you lose, you’re done, and your season is over.

Obviously, the seniors’ careers are over.

It’s a lot more pressure, but at the same time, with a performance like that over Clemson we’re coming in with a lot of confidence in our ability to play.

We’re really excited to chase history and try to win the Treble. I mean obviously at the beginning of the year, every team starts out with a goal of winning a national tournament, and we’re in a good position to do so.

Do you guys feel like you’re peaking at the right time?

I wouldn’t say we’re going to peak, but we’re continuously on our way up.

That’s always a good time to be increasing your play and to be able to play with confidence all the way through your season.

As the leader of the defense, what’s been the key to success for this stellar season on the defensive end?

Defensive organization has been amazing. The guys have really stepped up defensively to block shots.

We have our defensive goals in the locker room: block shots, limit saves, limit corners and restarts. We’ve all bought into trying to do that to the best of our ability.

Our backline has done a really good job, and I’ve only had to make a couple good saves. We’re just holding it down.

How is coach Muuss helping the team prepare for NCAAs?

The training sessions like that. We’re doing threshold sessions. We’re not doing a lot of fitness necessarily, but a lot of work that’s a little bit harder.

How do you go about talking to the younger guys about one-game elimination?

It helps that I’ve been there before, so I have experience.

You pull them aside, and obviously there’s going to be nerves for everyone involved, but you have to grow through them.

There’s a learning curve, but our guys are expected to perform to the best of their abilities every single day.