Demon Deacons get off to winning start 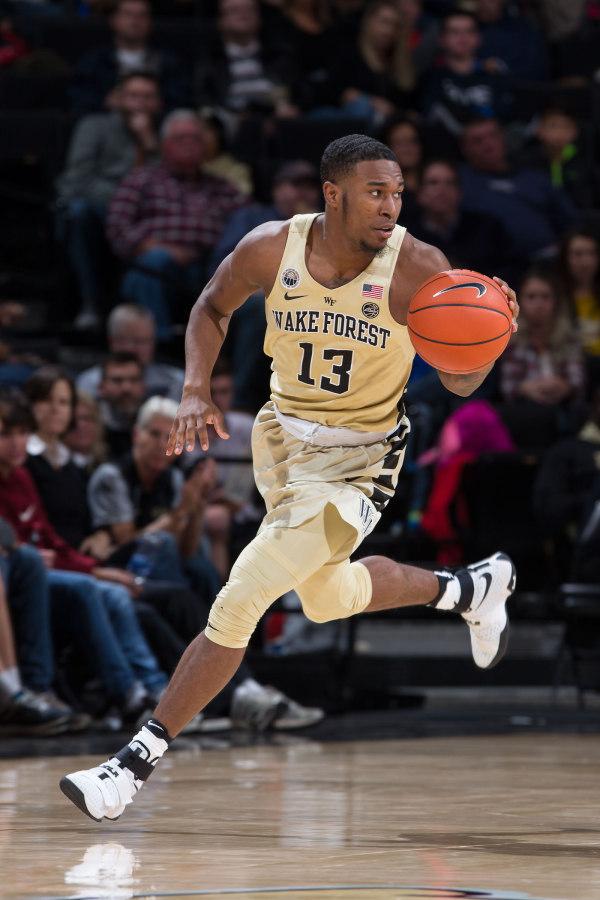 The 2016-2017 men’s basketball season tipped off their season in the Joel Coliseum last Friday, Nov. 11 against Radford.

As to be expected after a season opener, the Demon Deacons had much to work on, including their defense.

In the first half, Wake Forest stumbled when getting back on defense in transition and struggled to communicate with each other which led to easy offensive buckets for Radford.

Regardless of the defensive struggle in the first half, Wake Forest’s offense put up some impressive numbers on Friday.

One of those returners is, sophomore point guard Bryant Crawford, the Deacs top returning scorer averaging 13.8 points per game.

Crawford impressively finished with 14 points and eight assists on Friday, but after a slam dunk in the fourth quarter, he landed awkwardly and left the game with an injury. Head coach Danny Manning said it was a “cramping issue,” and Crawford was back in action in Sunday’s game against Bucknell.

Sophomore forward John Collins stole the show in the second half on Friday night against Radford.

Collins led the Deacs with his personal career-high 18 points in 23 minutes of playing time. Collins also led the team with 12 rebounds on the night.

The 21-point margin of victory was the largest for the Demon Deacons in a season opener since the 2008-2009 season. Redshirt transfer sophomore Keyshawn Woods also added 14 points off the bench for the Deacons in his debut in the black and gold.

Manning emphasized the youth of this year’s team with more than half of the team composed of freshmen and sophomores.

“We’re a young team as everybody knows: eight of our 13 guys are freshman and sophomores,” Coach Manning said.

While the Deacs managed to get the win, Manning stressed the long path ahead and the need for constant improvement: “We have to build. We have to continue to get better.”

With a quick turnaround, the Deacons hosted Radford at home on Sunday, Nov. 13.

With five players in the double-digit scoring column, the Demon Deacons extended their record to 2-0 with a 94-74 victory over Bucknell.

Sophomore transfer from UNC Charlotte Keyshawn Woods had a standout performance on Sunday which led Wake Forest to a win.

Woods bolstered a career-high 22 points of the bench to lead all scorers. After his back to back double-digit scoring performances, it would not be surprising to see Woods move into the starting rotation.

“This was an outstanding game for him. He’s embraced his role as the sixth man,” Manning said. “We don’t view him as a sixth man. I view him as our sixth starter because he’s going to play starters minutes.”

Sophomore point guard Bryant Crawford was back in action on Sunday with an excellent eight assists and zero turnovers. Junior leaders Dinos Mitoglou and Mitchell Wilbekin also contributed to the win with 11 and 13 points, respectively.

Defensively, however, Wake Forest still has plenty of room to grow.

Manning echoed the need for defensive improvement: “There are a lot of things that we need to correct which are correctable. We need to rectify those before we get on the bus and head to Charleston.”

All in all, the Demon Deacons started off their season with two back-to-back strong performances, with many players on the team contributing in various ways.

The Demon Deacons will travel to Charleston, South Carolina, this weekend for the Gildan Charleston Classic.