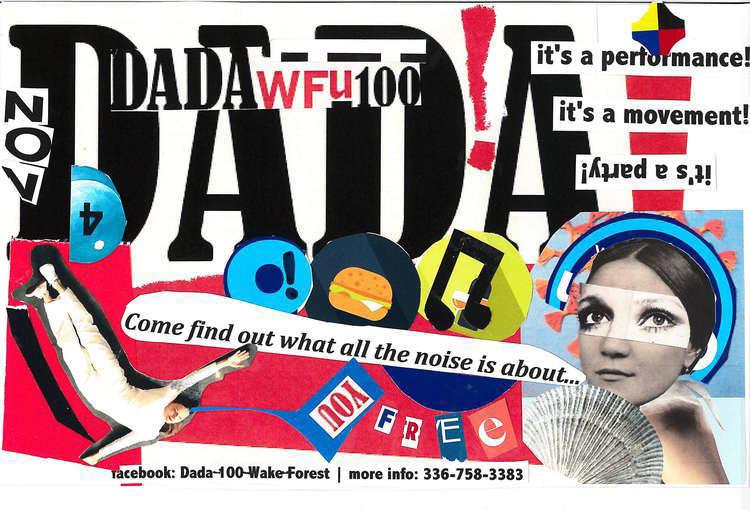 Between the hours of 6 p.m. and 9:30 p.m. on Friday, Nov. 11, ZSR library transformed: what was once a space for silent study echoed with the sounds of shouted garble, sinister notes on the bass and saxophone and chatter from students, artists and intellectuals alike. This was DADA 100 Wake Forest.

An initiative spearheaded by Lynn Book, associate director of Wake Forest’s program for Innovation, Creativity and Entrepreneurship (I.C.E.), DADA 100 Wake Forest was a coordinated effort by iPLACE (the Interdisciplinary Performance and Liberal Arts Center) and the I.C.E. department.

The event honored the 100th anniversary of Dada, an art movement created in reaction to the violence of WWI. Believing that the atrocities of the war were a direct result of the traditional, rational society preceding the conflict, Dada artists intentionally parted with rationality in favor of the irrational, illogical and nonsensical. Art from this genre celebrated randomness and chance, often crossing disciplines and combining visual, performance and music art all at once. As junior Yuning Feng put it, “Dada breaks the rules.”

Some guests were surprised by the irrational and bizarre art they saw, having not heard of Dada before. Ally Haran, a junior in one of Book’s I.C.E. classes, first learned of the art form at the beginning of the semester.  After learning more, she sees the relationship between Dada and entrepreneurship at Wake Forest.

“Dada shows us that you can create anything you want if you’re given the tools,” she said. “Wake Forest can provide them.”

The evening began with a panel discussion on Dada, its relation to modern-day society and a special focus on topics such as female artists of the movement and the multidimensional nature of Dada. On the panel were representatives from the student body, the departments of I.C.E., women’s and gender studies, art and creative writing, as well as members from the community and UNCSA.

The variety of intellectual areas represented on the panel speaks to the interdisciplinary nature of Dada.

“Dada crosses disciplines and moves into the cultural sphere,” Book said, emphasizing the importance of interdisciplinarity not just in the arts, but in entrepreneurship, problem solving and creativity in general.

Following the panel discussion, guests moved to the atrium where a series of Dada performances and exhibits were held. Interactive art, such as the exquisite corpse drawing method, — a process by which a piece of art is continuously created by multiple contributors — and collages assembled according to the laws of chance, were created by participants. Students read original poems, local musicians performed and the evening was concluded by the screening of six original Dada films, an arrangement curated by the primary student organizer of the event, senior Jay Buchanan.

Buchanan, dressed head to toe in a bizarre, Dada-esque costume complete with bowler hat, admires Dada greatly for its ability to challenge the status quo and expand horizons beyond the institutional structure of Wake Forest.

“Institutionalism restricts how we experience the world,” he said. “Dada is an action you take to shake off your institutionalism.”

Book, an interdisciplinary artist herself, also hopes to broaden perspectives through this living, active presentation of Dada.

“You have to experience the art,” Book said. “One has to feel it, hear it and engage with it in a creatively productive way. Not just read about it or treat it as an artifact.”

As a liberal arts institute, Wake Forest is an ideal place to showcase such a unique and, at the time of its creation, avant-garde art form.

“Anything that stretches the imagination is for the good,” said Mr. Wake Forest himself, Ed Wilson, who was also in attendance.

A goal of iPLACE and I.C.E. in planning this event was to inspire attendees to apply Dada to the current social, political and technological atmosphere. Much like the profound change the world experienced following WWI, Book argues that in the wake of a technological revolution, our current world and way of life are also rapidly evolving. Dada is reactionary and so, too, will be the art of our era. “Creativity is born out of conflict and troublesome ideas,” Book said.