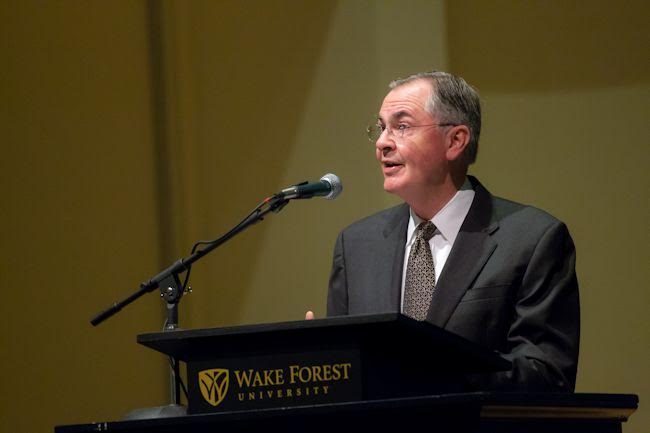 Wake Forest President Nathan O. Hatch took the stage in Brendle Recital Hall on Nov. 10 to deliver his annual State of the University address. Before launching into his address President Hatch took a few moments to address the elephant in the room: the recent results of the 2016 presidential election.

President Hatch recognized these days as one of the most divisive periods in American history, but he also reassured that the university would redouble its efforts to be a diverse community where everyone feels welcome.

“Our Wake Forest community is built on the foundation of mutual respect,” President Hatch said.

In opening the address, President Hatch began by describing the “Boys in the Boat,” a true story about the incredible success and cohesion of the American men’s crew team that won the gold medal in the 1936 Berlin Olympics. The team was said to have “swing” —  an intense display of teamwork and cooperation, where every rower was synchronized and the team as a whole was greater than its individual parts.

President Hatch recalled finding and working with remarkable colleagues in both his education and career, recognizing the potential in those that he considers friends and co-workers. President Hatch thanked the continued integration of the various functioning parts of the university, including the administrative staff, athletic staff, faculty, maintenance staff and many others.

President Hatch then moved to congratulate two important university initiatives in which the community had truly achieved the “swing” that the “Boys in the Boat” achieved. President Hatch referred to both Wake Downtown and the Wake Will Lead Campaign, recognizing the intricate teamwork involved.

President Hatch expounded the generosity and effectiveness of Wake Forest donors, citing that Wake Forest parents are ranked first in giving. This tremendous giving, among the donations of others, has allowed the Wake Will Lead campaign to reach a total of $625 million dollars two years before it’s scheduled goal. Over $14 million has already been distributed in increased scholarships and aid with a planned 33 percent of the entire campaign going directly to student aid. Other components of the campaign include creating 10 presidential chairs in an effort to recruit and retain elite faculty, 30 new academic funds and new or renovated facilities for the use of 14 Wake Forest athletic teams. In light of the massive success of the Wake Will Lead campaign so far, the university has set a goal of attempting to raise $1 billion by the end of the decade.

Dean of admissions Martha Allman reflected on the themes in President Hatch’s address.

“In the aftermath of a bitter presidential campaign, President Hatch’s positive message of teamwork, community, innovation and progress was most welcome. Updates on Wake  Downtown and the extension of the Wake Will campaign to a billion dollars, much of which will be used for student aid and academic resources, stirred optimism and excitement about the future of Wake Forest. But perhaps even more importantly, Dr. Hatch reminded us of the importance of working together for a shared vision, like the ‘swing’ of  successful rowers and encouraged us to now more than ever support all members of our community in the inclusive spirit of Pro Humanitate.”

Emma Rogers, a freshman student who attended the address, was impressed by the success of Wake Forest’s initiatives.

“The new opportunities presented by Wake Downtown will be great for so many students,” she said, “and the increase in student aid from the Wake Will campaign will really help a lot of students attend Wake Forest University without fear of financial instability,” Rogers said.

President Hatch’s address spoke to many of the positives in recent undertakings at Wake Forest University, establishing that the Wake Forest community is most successful when the many diverse parts of the University come together for the common good.