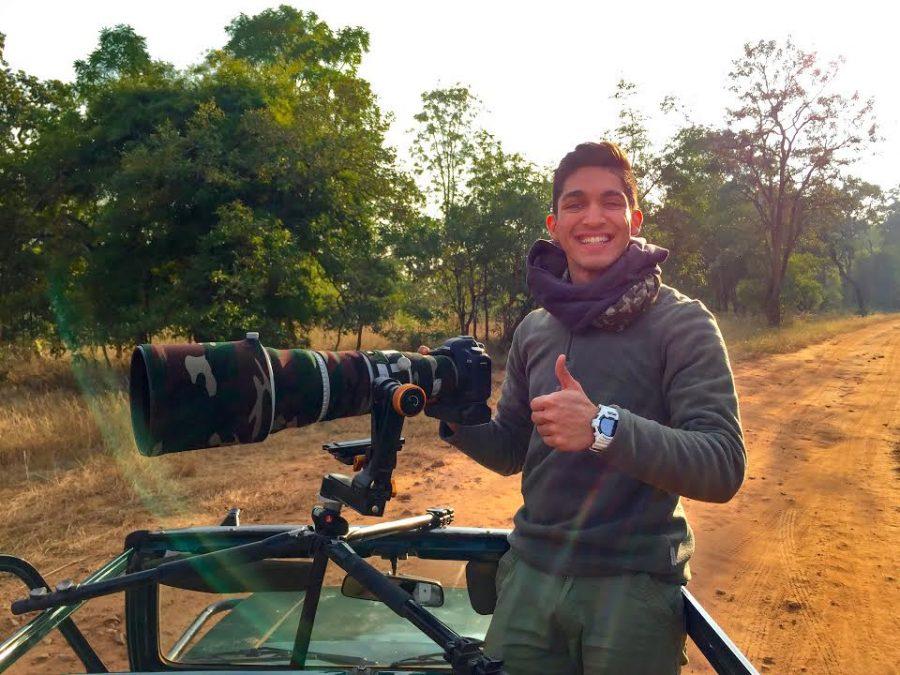 Junior Suyash Keshari has a passion that has garnered awards in international Smithsonian competitions and magazine covers and features, as well as brought him face-to-face with the most ferocious and exquisite creatures of the wild.

His skill for wildlife photography and filmography has earned him nearly 34,000 followers on his social media accounts, which he uses to send messages about environmental conservation and to share his love for wildlife with the world.

How did you develop a passion for photography?

It came from my love for wildlife. I grew up in India, and  my grandfather took me to the zoo every day. I was excited about going to the zoo and having fun there, just like every other kid. One day, I was standing in front of a tiger cage — I was four or five — and he asked me, “Suyash, what do you see when you look at these animals?” I told him I thought they looked so nice and so happy. I loved seeing these animals. Then he asked, “Do you know that they are very unhappy?” He told me they are not the same animals you see on television or in national parks free-roaming. They are confined to one room for the rest of their lives — it’s basically jail.

That broke my heart. That’s how I got more interested in animals. At this very early age, cartoons were replaced by shows on “National Geographic” and Animal Planet of hyenas devouring a kill, lions fighting with each other and tigers killing prey. I started reading about wildlife, too. Then, I lived in central India for 10 years. Central India has a dense population of wildlife, so it was basically my backyard. I would always go with my dad to different national parks, and slowly I started picking up a camera to shoot as a tourist. I wanted to capture wild animals in a better way, just like “National Geographic.” I was using a film camera with the reels. Then my dad bought me a good camera when I was 14, and that set the ball rolling.

Do you primarily shoot for nature and wildlife?

For instance, there is habitat destruction, overpopulation of wild animals within regions, climate change and human-animal conflict. There is a misunderstanding between humans and animals, a misinterpreting of motives. Right now, I think photography and filmmaking is the best way to get these out and send a broader message. That’s what appeals to the audience.

How have you learned to manage your interactions with wildlife?

I get really close to animals, and they’re all wild animals. They’re not trained, and they’re not used to people. I get within 10 meters of them, which is the closest I’ve been to a tiger. Over the years, I’ve been taught to observe animals and learn their behavior. When I shoot, I work with two people: a naturalist who drives the safari vehicle and knows everything about the reserve we’re in and a guide who is an assistant to the driver, my camera assistant and an expert on the animals.

What is the scariest moment you’ve experienced during a photography session?

This summer, I was photographing a tigress, and I was not able to get a good shot because she was inside a bush. I couldn’t really see her properly, so I repositioned myself. That made a little bit of noise, which annoyed her. She came out of the bush and came charging at me. She was screaming and growling. She stopped maybe five meters away from me, growled and ran away. Another instance, was when I was charged by an elephant four times on foot. We just stood in front of him, as we did with the tigress. You can’t outrun them. I had a ranger with me who had a rifle, but he didn’t use it.

Are you accustomed to being so close to wild animals?

I’m addicted to the adrenaline. That, and to some extent, I’m also used to it. When both of those instances happened, even though I had never had such a close call, I knew just to keep calm. My heart was racing — it was about to come out of my chest, — but I knew if I moved I would die.

Describe what one of your photography sessions is like.

Usually it’s planned months in advance. I choose the location, and I like to revisit locations I’ve been to just to track the animals and their life history, specifically tigers and lions. It’s usually an eight to 10 day shoot. Every morning, my crew and I get up at 3:30 a.m. I have a quadruple shot of coffee to get my day going. Then we pack up all the cameras and gear, decide what we are going to do for the day, leave around 4 a.m. and spend the whole day in the field. We carry our breakfast and our lunch. It can be 118 degrees fahrenheit out — summers can get really, really hot in India — or 30 degrees celcius out. Then we come back around 8 p.m. After that, we get dinner, clean off the cameras, then go through the photos and charge the batteries. We go to bed around 11 p.m. And then repeat. It can be tiring. I love sleeping in the safari vehicle. I can sleep through the bumpiest of rides on a safari vehicle, but I can’t sleep on my bed sometimes even if I’m tired.

What do you look for during a session?

It depends on the reserve or national park. If the national park has rhinos, tigers or elephants, we look for those. Most of my work is focused on big cats, so leopards, tigers and lions in India and lions in Africa. We look for signs like paw marks and alarm calls, which are basically other animals alerting the forest that there is a big cat on the prowl. Sometimes we can go days without finding anything. Usually we see the herbivores, but tigers and leopards are more rare. I’ve only seen two leopards in my whole life. But I’ve seen 42 individual tigers and over 105 times. I’ve written each of them down.

Every tiger has a different stripe pattern – it’s basically like a thumb print. 99 percent of the tigers in India have been photographed using camera traps that have been put all throughout the forest. Their ‘thumb prints’ have been recorded, so we know which tiger it is. Usually there’s a name or a code associated with each one.

[Tigers are] just so beautiful: orange, vibrant, charismatic. I love the way they walk, slowly lifting their paws. Their eyes are beautiful, and so are their coats, especially their coats. They just make me feel ecstatic every time I see one.

How has your photography has evolved over the years?

I think when I started I was very immature in terms of camera usage. Once I improved my camera skills, I got better at not only capturing good photographs but being smart with my decisions. When you see an animal, you have between one and three seconds to get the epic shot. Otherwise you’ve missed the shot. You have to think quickly. I think I have trained just being in the field. Then after getting that preliminary element down, after about four years, I could do something with my photographs.

I started storytelling through them, where I advocated not only for the area, but also for the wildlife and people. My recent project, which was a one-and-a-half year, half photography and half film project, focused on the people. It’s called “The Untold Stories from the Land of the Tigers.” It spoke of the people that live alongside tigers. When we think about conservation, we think about “National Geographic,”
WWF (World Wildlife Fund) and the United Nations Environmental Programme. But the real conservation lies with the people living alongside tigers and the people patrolling tiger habitats. They face many risks, and are basically the poorest in India. They don’t have electricity or running water, and they are dependent on the forest. No one really knows about them. Everyone knows the stories about the tigers, but no one knows the stories of the people who live alongside the tiger.

Many are trying to conserve the tigers. They don’t have money to relocate. I wanted to bring their voices out. I love the tiger — I want to save it. But you can’t just leave people out of the equation. It’s a huge problem, and there are a lot of politics that go into it. Right now, people are only trying a one-direction approach instead of a multi-directional approach. For them, it’s either about the people or the tiger. We need to bring everything into consideration. I presented this project at the Nature in Focus festival, a photography festival this August, and it got really good feedback. I gave a 20-minute TED Talk on it. That was my proudest moment — breaking a barrier to get my story out.

This project has a film aspect, and you created a film, “On the Trail of the African Lion.” How did you become interested filmmaking?

In some ways, I think it’s a better way to tell a story. A photograph can tell a lot, but it can only tell so much. Film can encompass broad topics, as well as specific topics. You can go in depth. You can change the scene and change the message every shot. For instance, a one-minute film is a conglomeration of 6,000 photographs. I can tell much more in that.

What do you want people to see or feel when they look at one of your photographs?

It differs for every photograph. For some of them, I just want people to observe the beauty of nature, the beauty behind the photograph. Others are more message-oriented and directional. There’s one photograph of a leopard on a tree, — which received third place out of 57,000 entries in the Sustainable Travel category in a Smithsonian photo competition — and it looks as if it’s hugging the tree. There’s a message behind it. The leopard grows, the tree grows, the tree grows, the leopard grows. You’re not saving one species; you’re saving an entire ecosystem. Basically, I want people to get curious about my photographs. Ask questions, ask hard questions. Read what I say; read the facts.

What are your short and long-term goals?

My short-term goals are to do well in school and do as many leadership activities as I can. I love being a leader. In terms of long term goals, I want to get into the development side of tourism and wildlife. I want to intermix politics with it, bringing my politics major and my entrepreneurship background for the business side. For me, it’s more about bringing about change in wildlife than photography or filmmaking.