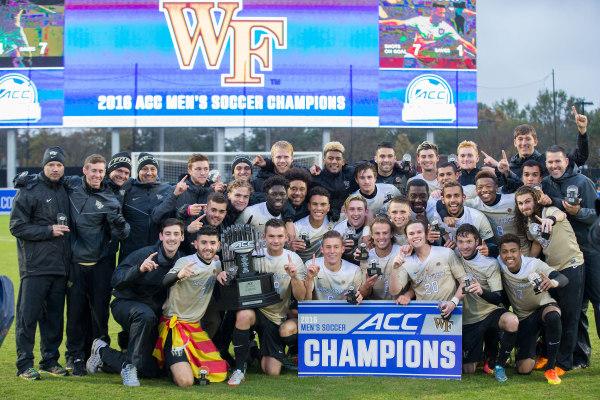 The No. 2 ranked Wake Forest men’s soccer earned a 3-1 victory over Clemson to win the ACC Championship on Sunday, Nov. 13 in Charleston, South Carolina. This is the second ACC tournament win in the program’s history; the first in 1989.

The Demon Deacons dominated the game from the beginning and put three goals away in the first 45 minutes of play.

Senior captain Ian Harkes put the Deacs on the board in the 24th minute when he fired a shot from the top of the box that soared over the goalkeeper into the left corner of the net. This goal was assisted by junior midfielder Luis Argudo.

Goals from senior Jacori Hayes and junior Steven Echevarria followed. Just eleven minutes after Harkes’s goal, Hayes found himself one-on-one with the keeper after receiving a pass from Harkes and taking a touch past the last defender. He slotted the ball into the net for his seventh goal of the season.

Echevarria secured the lead later in the half when he followed sophomore Tane Gent’s shot that was blocked by the goalkeeper.

“The game on Sunday was great,” Harkes said. “The way in which we dominated and controlled the first half was very impressive, and we really hope to replicate that in the upcoming tournament.”

Harkes was named ACC tournament MVP after the match and was also named to the All-Tournament Team along with Hayes and juniors Jon Bakero and Kevin Politz.

This was the first time the Demon Deacons have scored three goals in the first half since playing Louisville at the beginning of the 2015 season.

Wake Forest came out strong again in the second half and focused on possessing the ball and controlling the game.

Clemson got on the board in the 67th minute off of a penalty kick after being taken down in the box. This, however, was the closest the Tigers could get.

“The win was great and very historic for the program,” said senior Hayden Partain. “We worked hard as a team and bought into our system of play to make sure we executed our chances towards goal.”

The team was welcomed back to campus by the student body who greeted them with signs and cheers. The quad was also rolled to celebrate this huge victory.

The Deacs now prepare for the NCAA tournament.

“We have things we can fix, and we are going to grind this week to tweak those things and just push each other to get better every single day up until the game,” Partain said.

Wake Forest won their only NCAA tournament in 2007 after losing in the ACC Final to Boston College. Last season, they were ranked No. 1 going into the tournament, and they are now ranked No. 2 and awarded with a first-round bye.

They will play at Spry Stadium on Sunday at 1 p.m. against the winner of the Coastal Carolina-Radford game.

“Going forward, we are aiming to build off of the win and gain more momentum to win ourselves a national championship,” Partain said. “Anything shy of that is a total underachievement.”

Wake Forest will attempt to replicate the powerful offensive performance in the first half regardless of who their opponent is in the NCAA Tournament, as well as maintain their strong defensive communication.