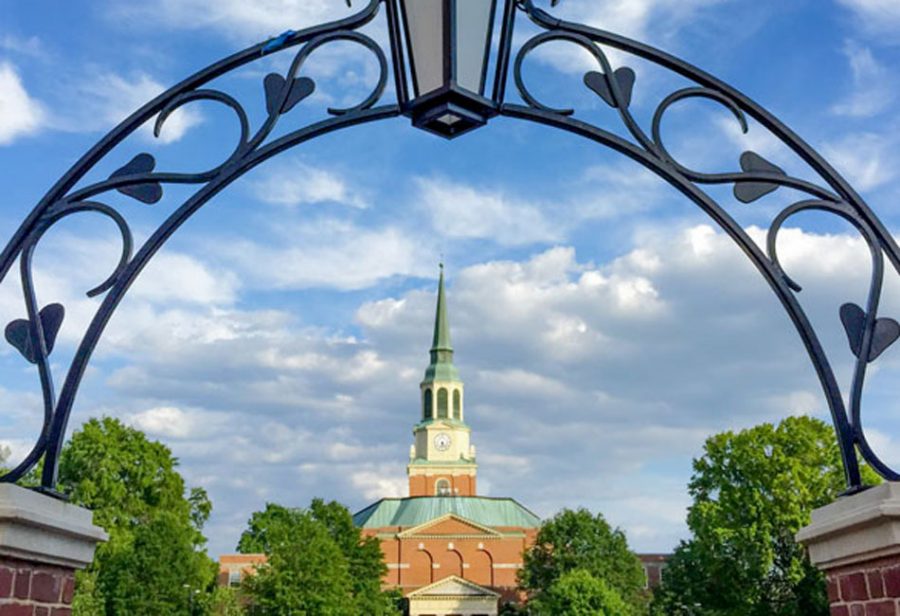 Since graduating from Wake Forest, Catherine has spent her time writing about underwear, socks and t-shirts. Somehow despite in her busy schedule she still finds time to return to Wake Forest for a few of her favorite traditions.

What is your favorite thing about Wake Forest?

One of the things that I really like about Wake Forest is the way people look out for and care for each other. The professors pay attention to how you’re doing, as well — some even came to our wedding. Now, when my husband and I feed law students, I feel like we’re carrying on the tradition of the professors who were so kind to us.

I had a long talk with one of my friends from Bostwick yesterday. We’re still connected, and I think Wake Forest had a part in that.

What is one of the funniest traditions at Wake Forest?

So, I slept in this really nicely worn out t-shirt that I got in the panty raid for much of college. But I cannot imagine that that is a tradition that anyone is still fostering. People would joke and get ginormous panties.

Do you have any entertaining Wake Forest stories?

An entertaining Wake Forest story is that I pledged Thyme along with a whole bunch of people on my hall in Bostwick. We are still in touch, which has been really fun. Thymes became Thetas somewhere, long after I graduated. I was pregnant with my first child when I got the letter that I could come to the meeting and become a Theta and learn the secret handshake. And I thought that showing up six months pregnant to learn my secret handshake looked too much like a bad movie or something.

What have you been up to since graduating from Wake?

I wrote a website called onehanesplace.com that is now also Hanes.com, which is like an outlet store. I can do HTML coding, but I don’t do the coding for the webpage. I do the coding for the copies that everybody uses to get their underwear and pantyhose. I always wanted to write, but I never wanted to write the Great American Novel. When I applied to Wake Forest, I think I wanted to write for “National Geographic.” That was the goal. When I graduated, I got a rotary scholarship, and I wanted to be a medieval literature professor. By the time I made it to senior year, I wasn’t sure if I wanted to be a professor.

What is your favorite Wake Forest tradition?

Definitely Love Feast. You sing Christmas carols, they have readings and there are coffee and buns. The best part is when they make everything dark and they light candles in the front. And then the people who light the candles take it row to row to row. We always try to sit in the front, so you can watch the light spread all the way up through Wait Chapel. The last song we sing is “Joy to the World,” and everybody stands up and raises their candle on the last verse. It is the most perfect moment. I have gone to Love Feast every year since graduating when I was not either giving birth or out of the country.