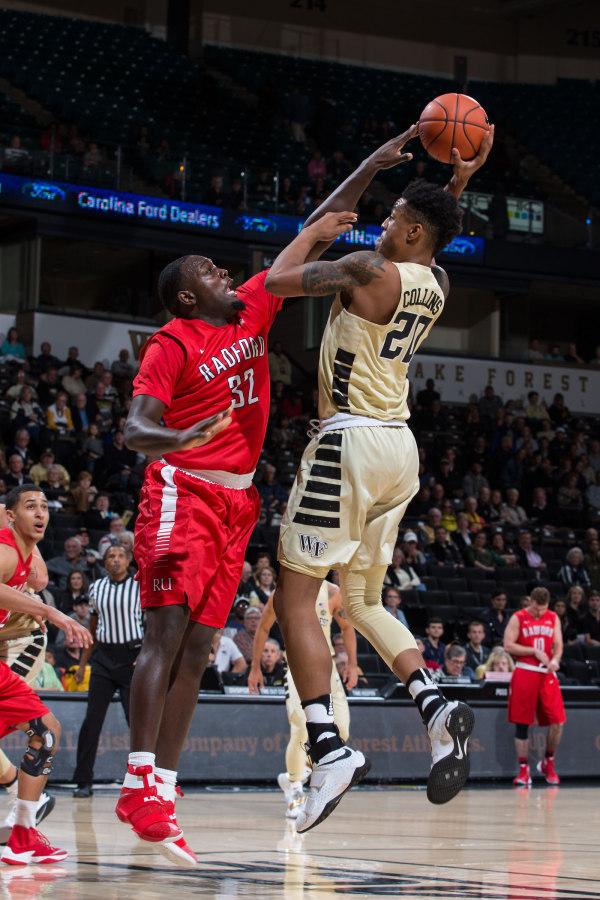 Sophomore forward John Collins may be the most improved frontcourt player in the ACC, and if he maintains his current play, he’ll be in the national conversation.

Collins is leading the Demon Deacons in points, rebounds and blocks, and is tied for the team lead in steals. An athletic and sure-handed 6-foot-10-inch post presence, Collins has proved his ability to hold down the paint on the offensive and defensive end for the Deacs, who will need to rely on him to close out games against tough ACC opponents.

The team has been scoring the ball well this season. Is there a new offensive philosophy?

I think its been a combination of inside and outside scoring. We’ve definitely improved our three-point shooting from last year to this year, and all of our guards have the ability to step out and knock down an outside shot, which I think really spaces the floor out a lot.

Doral (Moore), Sam (Japhet-Mathias) and myself are all good post presences, and we’ve proven ourselves to be able to score in the post. That creates a pick-and-play situation where we can either dump it in the post or rain it from deep. It’s been a big factor for us.

How have the new players been adjusting to the pace of the game?

They’ve been settling in well. Overall, I think our freshmen have done a good job of adapting to the system.

It’s a pretty young squad. How have the older players helped the younger guys get acclimated to college life?

Coach Manning is really on that all the time, so that gives us a good model to follow and build off of.

In coach Manning’s third year, how has he helped redefine the program?

Just for us, player-wise, he’s given us a lot of confidence.

He trusts us a little bit more than the team last year, so from a player-to-coach standpoint, we’re building trust throughout the team. We’ve grown with that trust.

Oh, yeah, we’re definitely a very, very tight-knit group. We all love each other, and it’s a very close group. I think the camaraderie will bleed onto the court.

How have you grown on the offensive and defensive end from last year to this year?

I think I’ve grown the most from a physical and positional standpoint. Last year, I struggled to be physical and struggled to knock off those stupid fouls, and those are some things that I’ve grown with. I need to continue to improve on them as well, but like I said, everything comes with time. It’s a slow process, but I’m getting there.

What goals do you have for this season on and off the court?

Off the court, obviously to handle myself academically, but personally, I don’t really know that I set any personal award goals.

I know scoring will come with playing within the offense and being patient, so just to do my job defensively and on the boards are my goals for myself.

What areas of the game do you think the team is excelling at the this year, and what are you guys working on in practice to improve upon?

We’re definitely trying to improve our defense, because obviously, you can get better everyday defensively.

We’ve been able to knock them down early in the season, and we’re hoping to keep that up.