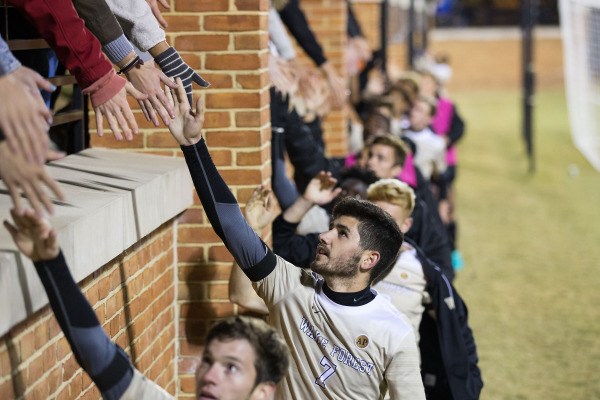 Wake Forest’s 2-1 victory over Southern Illinois University-Evansville on Sunday, Nov. 27 sent them to the Elite Eight of the NCAA Men’s Soccer tournament.

This is the first time since 2008 and 2009 that the Deacs have made it to the quarter-finals two years in a row. Last season, they were eliminated in this round after a loss against Stanford.

They will now face Virginia Tech on Saturday, Dec. 3 at Spry Stadium, a team that they have not yet seen this season.

“We still have a bitter taste from the Stanford game, and now we are hungrier than ever to get a win against the fantastic Virginia Tech team,” said head coach Bobby Muuss. “We couldn’t be happier to play in this game that is great for our conference and couldn’t be more excited to play at Spry.”

The win on Sunday evening was the 11th in a row for the Deacs: the sixth best streak in program history. It was secured by junior Jon Bakero’s two goals.

He put Wake Forest on the board in just the third minute of play off pass from senior Jacori Hayes. Hayes received a through ball by the end-line, and slotted it into the middle of the box for Bakero.

“I’m super happy to help the team with two goals. I was lucky enough to be in the right place both times. Scoring is always nice, but what’s most important is that we keep winning,” Bakero said.

The Deacs possessed the ball for most of the half and kept the ball down on their side of the field until the 41st minute when SIUE earned a corner kick. Wake Forest goalkeeper freshman Andreu Mundet blocked the initial shot that came off of the corner, but was unable to stop the rebound from the loose ball that came right after.

The Deacs dominated the second half as well, ending the game with 23 shots to SIUE’s 7 shots. They had a few good opportunities but struggled to get the ball in the net again until the 72nd minute when they earned a corner kick.

The ball was sent to Ema Twumasi who took a shot from the top of the box. Bakero was standing by the left goal post and was able to get a touch to redirect the shot into the right corner of the net.

“I’m really happy that Jon was able to get two goals tonight,” said senior Jacori Hayes, who will play his last game at Spry this Saturday. “We didn’t capitalize as much as we would have liked, but we scored as many as we needed to win.”

The team will spend this week recovering and preparing to continue possessing the ball and dictating the tempo for the game against Virginia Tech next Saturday, Dec. 3.

“We are excited to be together and enjoy the team this week. We really wouldn’t want to be anywhere else,” Muuss said.

The Hokies defeated No. 7 Indiana 2-1 in overtime on Sunday afternoon, and are in the Elite Eight for the first time since 2007, the season Wake Forest won the national championship.

Last time the two teams met was in 2014, and Virginia Tech earned a 2-0 victory.