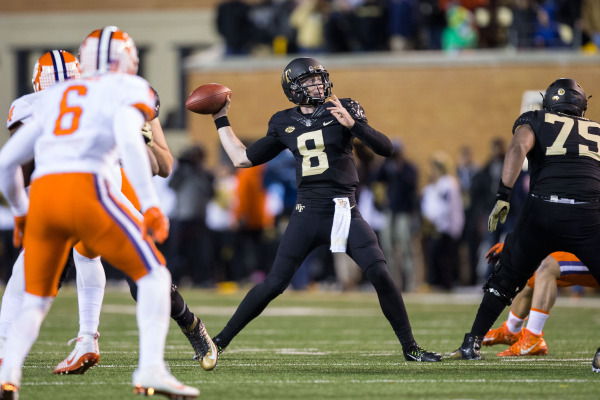 The Wake Forest football team closed out the regular season on Saturday with a 6-6 record. Two weeks ago, the Deacs fell to Clemson 13-35, and last weekend they couldn’t defeat the Boston College Eagles, losing 14-17.

Considering how promising the Deacons’ start to the season was, fans were expecting more than one victory in the last six games.

Granted, the second half of the season was packed with more difficult opponents, but the Deacs were heavily favored to win against Army and Boston College. Victories in these two winnable games could have put Wake Forest in the AP poll rankings for the first time since 2008.

Wake Forest could not overcome a tough first quarter in which No. 4 Clemson tallied 21 points and held the Deacons scoreless.

“I was a little bit shocked at the way it started,” said senior linebacker Marquel Lee. “We didn’t want it to start like that. We just wanted to get out and keep it a 0-0 game and give ourselves a chance.

Clemson scored on its first possession as Wayne Gallman ran for a 42-yard touchdown, converting on 4th-and-short.

“I’m disappointed in the result,” said head coach Dave Clawson. “We got off to an awful start. A lot of it was that they played well, and a lot of it is we just didn’t execute.”

The Deacs fought to make the score 10-28 at the half, but they could not overcome the Tigers.

“Our kids battled back,” Clawson said. “We made it a game in the third quarter, but we were very limited in what we were able to do. Against a good defense, it’s hard to be limited. We didn’t turn the ball over, which is a positive. We didn’t make plays though, and certainly there were mistakes made.”

Redshirt freshman quarterback Kyle Kearns started for the first time this season in place of an injured John Wolford and passed for 122 yards. Running back Cade Carney had 59 yards rushing with one touchdown, and Mike Weaver kicked a 42-yard field goal as well as another for 23 yards. Kearns finished the game 7-for-18 with 126 yards passing and no turnovers; he was unable to execute the powerful plays the Deacs needed against such a strong Clemson defense.

The next week, the Deacs took on Boston College at BB&T in the last game of the season. The Eagles defeated the Demon Deacons 17-14 at BB&T Field.

Wake Forest had a 14-10 lead going into the fourth quarter but Boston College responded with a late touchdown drive. Boston College became bowl eligible with the victory.

“They kind of remind us of ourselves,” said redshirt senior defensive lineman Josh Banks. “They’re very physical. There is good defense on both sides. It was a pretty toe-to-toe match. The better team today won, and we just have to go back to the basics.”

Boston College retook the lead in the fourth quarter on a 13-yard touchdown pass to Tommy Sweeney which put the Eagles in front 17-14.In the last minutes of the fourth quarter, Wake Forest’s Duke Ejiofor sacked quarterback Patrick Towles to force a punt.

On the following possession, Wake Forest drove to the BC 22-yard line but missed a 40-yard field goal that would have tied the game. The Deacons had the ball with less than a minute left, but the Eagles stopped the drive and finished out the game for the win.

“This one hurts. It’s one of those games when you look back on it it’s going to sting a little bit. We just have to let it make us stronger. We’ll take 24 hours to mourn over it and then get ready for our bowl game,” said redshirt junior tight end Cam Serigne.

Despite the shortcomings, the Demon Deacons showed astounding improvement this year. The team is far more skilled, well-rounded and driven than in recent years, and they are now preparing for their first bowl game since 2011.

The bowl pairings will be announced on Sunday, Dec. 4 following the conclusion of league championship games. Some possible opponents include Vanderbilt, Maryland, Houston, Temple, Stanford, Minnesota and Arizona State.