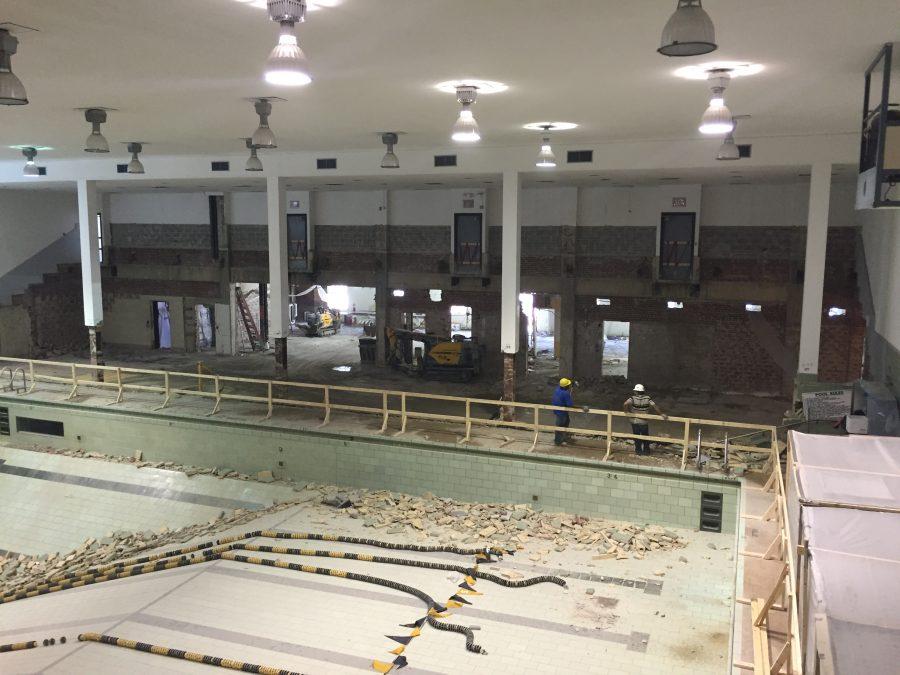 Ongoing renovations to the Reynolds Gymnasium have left the campus pool unusable until construction is complete in March 2018. While the new pool will have markedly improved features such as eight 25-yard lanes, a whirlpool, refurbished locker rooms, a wet classroom, expanded deck space and natural lighting, students currently lack an aquatics facility on campus.

As a result, the club swim team and other student swimmers have had to make contingency plans for workouts. However, on Nov. 8, the administration presented students with the opportunity to use the pool at Winston-Salem State University (WSSU) free of charge during specified time slots in the early morning and late evening.

The agreement between WSSU and Wake Forest is part of a lengthy resource-sharing partnership. Approximately 20 years ago, WSSU was one of the founding participating teams in the Martin Luther King, Jr. Holiday Invitational basketball tournament, which was started by Wake Forest director of Campus Recreation Max Floyd. In recent years, WSSU has hosted some of the games in their campus facilities to relieve pressure on Wake Forest to entirely host them. According to Floyd, WSSU has a “can-do spirit” in regards to addressing community needs, and he “looks forward to the day” when Wake Forest can return the favor to WSSU.

“In a time where some organizations across our land seem to be struggling to unite around felt needs, this collaboration is wonderful reminder that the heart of what we do on both campuses is truly focused on meeting the needs of our campus communities. WSSU has made a visible gesture in our direction responding to a real need, showing us that in their neighborhood lives our motto of Pro Humanitate as well,” Floyd said.

A few students have taken advantage of the opportunity to swim at WSSU, and Floyd is optimistic that more will join them once awareness about the partnership increases. Members of Wake Forest Club Swimming currently practice at a YMCA in Winston-Salem due the timing of lane space availability at WSSU.

“At the YMCA, we have guaranteed lane space four days a week at a more convenient time” said sophomore swimmer Sierra Burick. However, even though holding practice at WSSU is not currently happening, freshman swimmer Lauren Drury “[looks] forward to the new opportunities that will come with being able to use the WSSU pool for training. Since it is a college pool, it will have more accommodations for a college swim team,” she said.

“It would be preferable to have practices there, because their facility is nicer than the YMCA we currently use,” added junior Emily McMullen, president of Wake Forest Club Swimming. “It is more similar to those we normally compete in.”

At present, logistical complications appear to be the most significant reason why more students have not taken advantage of aquatics facilities at WSSU.

“I know quite a few people who would like to use the pool there, but none who have done so successfully. I think the issue has mostly been the limited hours and transportation to and from the pool,” McMullen said.

Students, faculty and staff interested in using the aquatics facility at WSSU must present their Wake Forest ID and will also require a parking pass. Semester passes can be obtained by contacting Floyd. The collaboration between the two campuses will be re-evaluated for the 2017-2018 school year, so in the meantime, students can take advantage of the generosity of WSSU.

“May the writing of our universities collaborative chapters in our respective campus novels show many examples of how both campuses reached across Highway 52 on a regular basis.  When we do continue to reach across the highway, as we demonstrated this past month, I am confident that both campuses will be at our best as we strive to make a difference in the lives of many,” Floyd said.