Exciting week of games across the country in the NFL 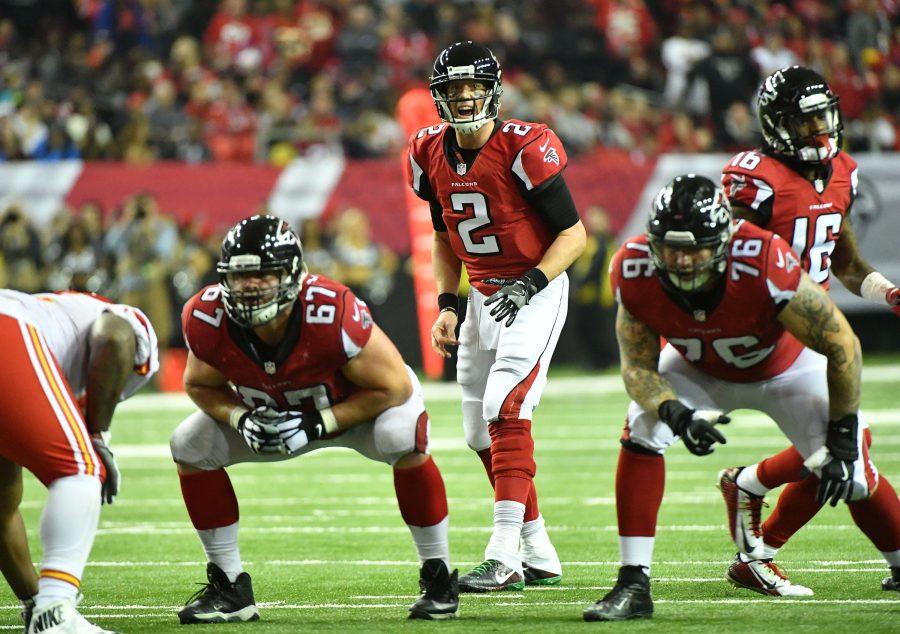 Atlanta Falcons quarterback Matt Ryan (2) shouts out during the second half against the Kansas City Chiefs on Sunday, Dec. 4, 2016 at the Georgia Dome in Atlanta, Ga. (Hyosub Shin/Atlanta Journal-Constitution/TNS)

The now 9-3 Chiefs travelled to Atlanta to face the Falcons on Sunday, Dec. 4. Chiefs defensive back Eric Berry was the superstar in the second half and led his team to victory. In the third quarter, Berry intercepted Ryan’s pass and returned it for a touchdown, the only score in the third quarter. The game was closely-matched on both sides, but the Falcons rallied from a 27-16 deficit to go up 28-27 with 4:32 left in the fourth. Looking to stretch their margin of victory to at least a field goal, Atlanta decided to go for the 2-point conversion. Berry intercepted Ryan’s conversion pass and ran 99 yards the other way to solidify the Chiefs win. Atlanta is the location where Berry was diagnosed with Hodgkin’s lymphoma near the end of the 2014 season. In the post-game interviews Berry said, “It was just a lot of emotions. I tried to contain them and let it show through my play.” Concerning his performance on Sunday Matt Ryan said, “I was expecting combination coverage to the outside. Eric Berry did good job coming down off and going onto the tight end. A disappointing play.”

The Panthers disappointing season continued on Sunday night with an ugly loss to the Seahawks. Seattle’s RB Thomas Rawls impressively finished 103 yards and two touchdowns in the first half. As if the Panthers needed another deterrence, quarterback Cam Newton was benched for the first play of the game, while backup quarterback Derek Anderson threw an interception to start off the offense. Panthers coach Ron Rivera said Newton violated a dress code (he did not wear a tie on the team flight) to which Newton respectfully responded, “I think there was a lack of communication on my part. I think I have to be accountable to know certain things.” The Seahawks offensive performance earned them a season-high 534 yards. They remain atop the Arizona Cardinals in the NFC West.

Having clenched their fourth straight win as they took on the Chargers at home, the Tampa Bay Buccaneers are tied with the lead in the NFC South. Buccaneers quarterback Jameis Winston finished 20-30 on completions with 280 yards. Offensively, the two teams were evenly matched throughout the game. The game-winning action took place in the fourth quarter as Chargers kicker Drew Kaser helped the Buccaneers by letting them start on the 46-yard line. On the fourth play of the drive, Winston connected with Brate for a touchdown. When the Chargers got the ball back, Rivers had his offense moving until safety Keith Tandy intercepted a pass intended for Dontrelle Inman with 2:56 left and clenched the win for the Buccaneers.

Lions quarterback Matt Stafford led his offense with 341 yards and two touchdowns to solidify a 28-13 win over the Saints on Sunday. Statistically, from the box score, the Lions dominated, but Saints kicker added four field goals to keep the Saints in the game until the fourth quarter. Saints quarterback Drew Brees finished 31 of 44 for 326 yards but was intercepted three times and finished without a touchdown for the first time in 60 home games. The Saints travel to Tampa to take on the Buccaneers this week.