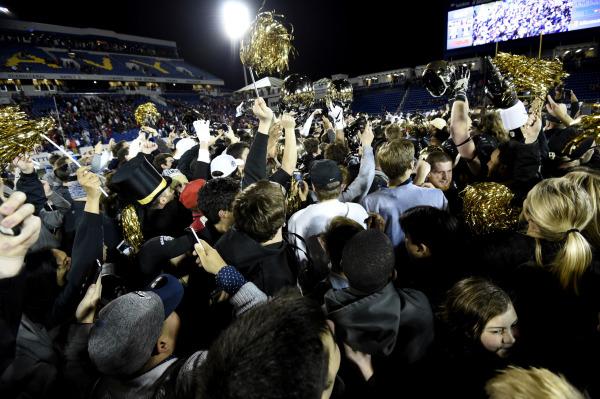 Though the game didn’t start the way the Deacons wanted, it certainly finished in a favorable way. Wake Forest overcame a mid-game injury to starting quarterback John Wolford to take down the No. 23 Temple Owls on Dec. 27 and become the 2016 Military Bowl Champions.

The first play from scrimmage was a Temple 48-yard touchdown, silencing a raucous Wake Forest crowd. The Deacons wouldn’t be quiet for long, though; two touchdown passes in the first quarter, a 20-yarder to Tabari Hines and a 41-yarder to Cam Serigne.

Wake Forest had trouble scoring in bunches this year, so the quick 14-7 lead at the Military Bowl gave Deacon fans a hope that this game would continue to defy expectations. Temple came into the game as favorites, riding a seven-game winning streak, while Wake Forest had lost five of their last six games. The difference between this game and the matchups at the tail end of Wake Forest’s season was that, as Wake Forest head coach Dave Clawson said, “We were healthy…and we could run the playbook.”

That sly reference to the playbook was directed towards the recent scandal involving Wake Forest’s leaked plays and their former assistant coach Tommy Elrod, who leaked the plays to other teams in the ACC and Army over the last two years. Elrod has since been fired and Clawson was adamant that the program has moved past it. The investigation and subsequent storylines only truly left the front pages of newspapers and websites in the last week, and the bowl win was a testament to the way that Wake Forest has handled the different types of adversity thrown at them this season.

In the second quarter, Wake Forest looked like the team they’d been striving to be the whole season. They scored on every offensive possession, with two rushing touchdowns and a field goal to distance themselves from the Owls. A late Temple field goal put the score at 31-10 going into halftime.

Wake Forest let off the gas in the third quarter, allowing Temple to score 10 unanswered points and creep back into the game. Temple received the ball to start the second half, and began it much the same way they did the first half — a long touchdown pass, Temple receiver Adonis Jenning’s second of the day. With starting quarterback John Wolford going down with a neck strain just seconds after Temple’s touchdown, Wake Forest redshirt freshman backup Kyle Kearns had to take over the reins of the offense. After marching the Deacons down the field, Kearns’s inexperience showed in the red zone, as he threw an interception in the end zone with 9:04 remaining.

Temple capitalized on the mistake with a field goal with four minutes remaining in the second quarter, making the score 20-31 to end the third quarter.

In the fourth, Wake Forest was simply focused on maintaining their lead. Another Temple field goal three minutes and 30 seconds into the fourth quarter allowed Temple to maintain their momentum, and as they gathered confidence in their shotgun offense, the Owls kept moving the ball and pressuring the Wake Forest defense. Perhaps the biggest play of the game, though, came at a time when Temple was knocking at the door of the Wake Forest end zone. A 22-yard sack from Ejiofor with just under five minutes remaining sent Temple from the Wake Forest eight-yard line to the 30, taking Temple out of the red zone and Wake Forest out of imminent danger. Temple took their third field goal of the second half with 3:56 remaining in the fourth, giving Wake Forest the ball back with the score at 31-26.

Senior kick returner John Armstrong took the ensuing kickoff 80 yards back towards the Temple endzone, a much-needed boost for a Wake Forest offense that had played uninspiring football in the second half. Three jammed running plays later and Wake Forest kicker Mike Weaver punched in a short field goal to close out the scoring for the game at 34-26. Wake Forest assumed the victory formation with just under a minute left, and was welcomed with their first bowl win since 2011 when the clock ticked zero.