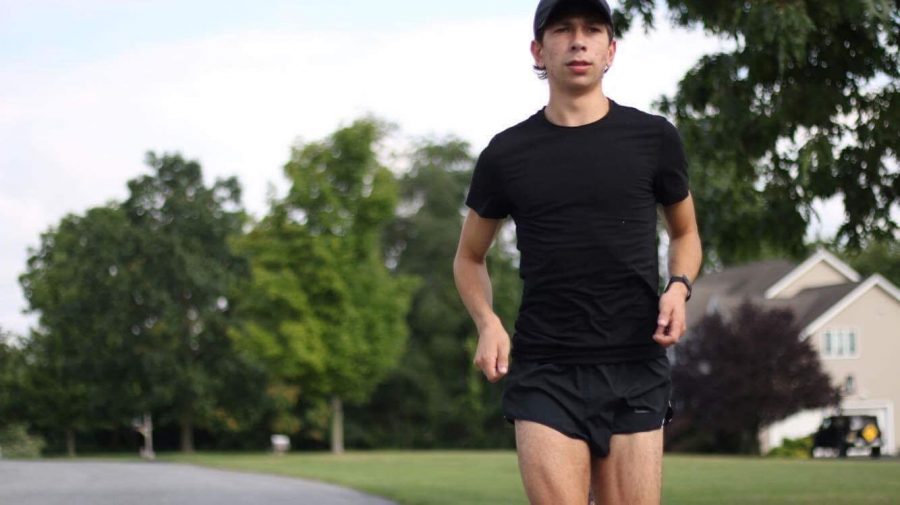 Nick Raefski is a sophomore planning to major in economics and political science, which are seemingly standard selections considering his many different interests.

The Wake Forest track runner’s new documentary, “Hot Topic,” recently gained funding through Kickstarter, and Raefski has used  his many  hobbies, which also include creating his own fashion line, to manage recent struggles with a mental health diagnosis.

How have you become involved in such a wide variey of activities?

During first semester at Wake Forest I was diagnosed with severe Obsessive-compulsive disorder (OCD), so I really struggled my freshman year with finding my sanity. I wasn’t really myself, and I lost a lot of people who were close to me.

I was noticing a lot of behaviors, like I was counting a lot, talking to myself and always felt uneasy. Then, second semester, as soon as I got back to campus, I injured myself running, and that was the push that kind of set me off. I just kind of lost it. I stopped eating, I stopped sleeping, I couldn’t run, because I had no energy, and I counted everything. I counted steps, and I would shower five times a day. Eventually, I pushed those in my life who were closest out, and once they left, I was a wreck. The doctors thought it was something physical. I got tested for everything.

One night I kind of had a breakdown and I called my mom around midnight and told her that something was off. Unbeknownst to me, I had a family history of severe mental illness in my family. After that, I was properly diagnosed and I saw the people I needed and I got back to being really healthy. Once that happened, I realized that you only really get to live life once, and there had been things that I was always interested in that I had never pursued.

So I decided to just “do me.” A lot of people from the outside look at me and think that I have a lot of different crazy lives, and that’s definitely true, but it kind of helps me balance. Running is something I love to do, but that’s only one aspect of my life. School is another aspect and my fashion line is another, but they don’t all intertwine as much as people might think. Everything balances out. It’s calming; it’s like a scale.

How do you prioritize your time and achieve this balance between your different interests?

During first semester, I produced my first collection in my fashion line. I’ve taken a break to focus on athletics and academics. However this summer, in addition to producing my movie, I’ll hopefully be able to produce my second collection.

Fashion is really a passion of mine. I like dressing and I like fabrics. That’s really relaxed. The movie is something I will do over the summer. They’re different, but they all have their benefits in my life. They help me to live as normally as I can live. It can definitely be a lot at times, but I’m happiest when I’m running around kind of doing that. I don’t like just sitting down to relax, I’m always going.

I live a very rigid schedule, so I’m constantly planning. I’m also constantly thinking. At night, I’ll check to see if I got everything done, and if I didn’t, then I’ll probably go back and keep working.

Scheduling is sometimes hard in regards to working with the movie. It’s hard when you’re working with people when 2:10 to them is really 2:30. You have to learn to deal with it. The whole film, it’s a lot more fluid, that’s something I learn about as I go along.

Running is something I really do enjoy. Maybe I’d put that over the others, but only by a little bit. One thing I learned last year is that you can’t just define yourself in one thing. I had defined myself as a runner.

What was your inspiration for your fashion line?

Last year, I had the hardest struggle I’ve ever endured. When I was at my lowest point, I lost everything. I lost the people closest to me in life. I lost my sense of self. I lost running — I had nothing.

And so I had to slowly build myself back up. I’d always been interested in fashion, but I was always scared to do it. I’m a straight guy that likes to dress, and people think that’s weird and different. I needed something like that to push me.

My first collection had four sweatshirts, four t-shirts, two pairs of jeans and a hat. People saw it, and they wanted to buy it. That was really cool.

I started talking to a lot of people and investigating people who produce clothes, but I decided that my first collection was so personal and so special to me that I just didn’t want it to be for a large audience. My first collection isn’t available for purchase, and I only have a couple of prototypes for each model. I’m really hoping that this summer I’ll be able to make both a mens’ and womens’ line, and someone will pick it up. It would be really cool if you asked someone who they’re wearing, and they would be like, “Oh, I’m wearing Nick.”

The fashion is very different, and I think that it scares a lot of people. When I first told people that I was going to design a collection, they asked why, and one thing that was cool for me was to see those people slowly start to get a picture and find it cool. It was also cool for me to know that I had the idea in the back of my head the whole time, it just took some work.

Your new documentary, “Hot Topic,” explores marijuana use and legalization. What has been your approach to such a controversial issue?

A year ago I never thought that I would produce a documentary. Being in college, however, I’ve realized that it’s a great avenue to explore a topic you might be interested in. We’re exploring the topic of marijuana and we’re kind of coming from a very unbiased side.