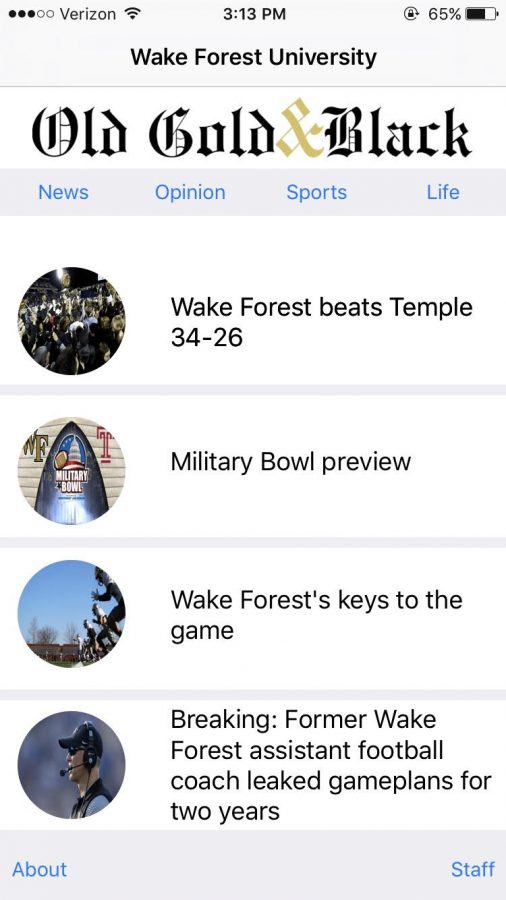 One hundred and one years ago, passionate student journalists with a vision joined together to create the Old Gold & Black, an independent newspaper covering campus news at Wake Forest.

Now just over a century later, similar-minded students contributed to the creation of the Old Gold & Black app, which effectively launches the second century of the newspaper into the digital world.

Shelby Devine, a junior and former staff member of the newspaper, first imagined the idea for the app and worked alongside the computer science department to make her dream a reality.

“I was trying to think of ways to make the paper more accessible to busy college students, and I thought that creating an app would accomplish that goal,” Devine said. “By having a mobile version of the newspaper on their phones, I think the Wake Forest community can be even more connected than it has been in the past.”

The American Press Institute cites that 94 percent of millenials own smartphones, and of this demographic, 82 percent of them get most of their news from online sources.

The way students consume the news is changing as the prominence of smartphones and social media increases.

The app is now available on the App Store and is designed after major news organizations in the way it presents articles.

Upon opening the app, users see the basic headings for News, Opinion, Sports and Life and can navigate through the sections to find individual stories.

Most stories also feature photographs and information about the writer. The app also includes a page with the names and photographs of the team that helped create the program.

The development of the app is still in progress, and plans for additional features are underway.

“So far, the app will have the articles we print in the weekly newspaper organized by each section,” Devine said. “Next semester we are hoping to add more features like a ‘trending now’ section or notifications that are sent to your phone when something exciting happens on campus, such as winning a big sports game or something else that people want to know and read about.”

After forming the initial idea for the program, the physical creation of the app ensued.

Devine reached out to Professor Daniel Cañas of the computer science department to help with the creation and design of the app.

He later proposed the idea to students in an upper level programming class.

Seniors Mara Rodriguez and Amanda Zihenni, alongside junior Jennifer Sun, worked with Professor Cañas to fulfill the requirements of the app.

“One of the most difficult decisions we had to make was the design of the USR interface,” Cañas said. “This is not something particular to the OGB app, it is something in every app development. In terms of programming, we spent a lot of time making the app independent from where the data is stored. Our goal was to publish the newspaper in a mobile device that would not generate extra work for those managing the newspaper, and I think we achieved this goal.”

Because young people often consume news more digitally, the creation of the app is intended to increase traffic to student-written stories and to make their individual work more accessible for students.

“This project has been so rewarding because the app was created by students and is intended for students, parents, and the Wake Forest community,” Devine said. “With this in mind we made the app something that students will want to use as a way to access relevant Wake Forest news.”