Rogue One: A new hope for the franchise? 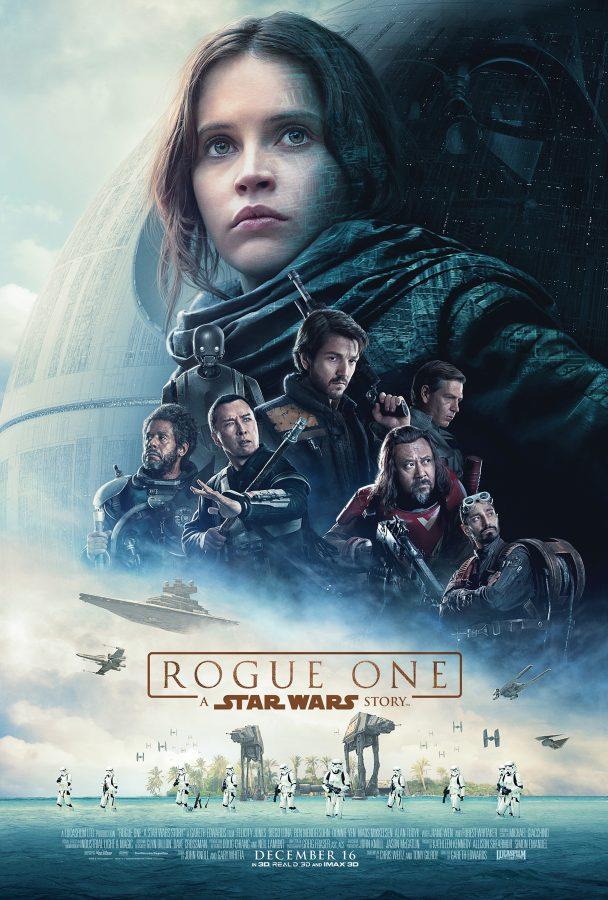 After the release of Star Wars: The Force Awakens during the holidays of 2015, there was a resurgence of love and nostalgia for the timeless galactic story of good versus evil. This new addition to the Star Wars cinematic universe was further complimented by the addition of the Star Wars Stories series, a franchise of stand-alone spin off films planned to be released concurrently with the main Star Wars films. The first feature in this series, Rogue One, released this past December, was met by generally positive reviews. It received an 85 percent from “Rotten Tomatoes,” a 65/100 from “Metacritic” and an 8.1/10 from “IMDB”.

Rogue One was obviously a highly anticipated feature due to the positive reception of the Star Wars franchise reboot following the release of The Force Awakens and the fact that it bridges the hiatus between The Force Awakens and the as-of-yet unnamed eighth installment in the new trilogy (set to be released in December 2017). However, fan-boy, rosy glasses aside, Rogue One falls a touch flat from my expectations for the series. Rogue One suffers from a movie trope that is commonly found in long-awaited sequels, spin-offs and reboots; the idea that a real, developed story is not needed as long as we include enough throwbacks for the longtime fans.

It started with the characters. I watched this movie, and I wanted to care what happened to the people on screen. I wanted to care about their struggles and fears, and I wanted to root for their victories, but I just couldn’t. The opening scene introduced Galen Urso, the original designer of the Death Star-made a changed man, his daughter Jyn-an almost carbon copy of Rey from The Force Awakens, and a power-suited Saw Gerrera, a rebel extremist who truly seemed to serve no plot purpose other than to serve as the transition between child Jyn and young-adult Jyn. These characters all seemed hollow and archetypal, none holding either the bad-boy coolness of Han Solo or the hero-valor of Luke Skywalker. The director, Gareth Edwards, then continually added more characters to the mix, none possessing any true motives, personalities or depth. From the blind pseudo-Jedi Chirrut Imwe (don’t even get me started on the whole blind warrior trope) and his mercenary friend Baze Malbus to the defected imperial pilot Bodhi Rook none of these characters mattered to me. They didn’t do anything or had no real reasoning behind being in the story other than to provide cool hero deaths that I suppose were meant to be meaningful, but felt more like watching mannequins die.

As a brief interjection, I would like to say that I greatly appreciate the attempts that Disney is making to paint the Star Wars universe as a more diverse environment. From main character Cassian Andor’s thick Mexican accent to the inclusion of women in positions of leadership and power and to the inclusion of under-represented races and ethnicities, Disney is making excellent strides in creating an inclusive narrative out of one of the most-loved stories of all time.

Following the complete lack of character development, the gimmicks intending to appeal to older Star Wars fans began to get a bit tiresome. These include cameos by R2D2 and C-3PO, the dramatic and over-the-top reveal of Darth Vader, the battle on Scarif (greatly reminiscent of the battle of Hoth in The Empire Strikes Back) and the blasphemous use of CGI to recreate a creepy and inhuman Grand Moff Tarkin (originally portrayed by Peter Cushing until his death in 1993) and a younger, plastic looking Princess Leia (originally played by Carrie Fisher). These unnecessary add-ins show a lack of ingenuity and passion in Disney’s acquisition of Star Wars — preferring to follow George Lucas’s Formula for success rather than forge their own path. The one exception to this is the ending of the film. After Tarkin ordered the destruction of the Empire’s base on Scarif, Cassian and Jyn embrace on the beach and await their death.

This is an ending I was not anticipating, and it very much breaks away from the “everybody lives happily ever after” endings that the original Star Wars could be known for. This, combined with the seamless transition from the events of Rogue One to A New Hope at the end of the film, was a welcome breath of fresh air from Edwards. This was something that struck just the right nostalgic chords. Overall, Rogue One, while at times lacked character development, is still a great movie and deserves it’s accolades. I would rate the film an 8/10.