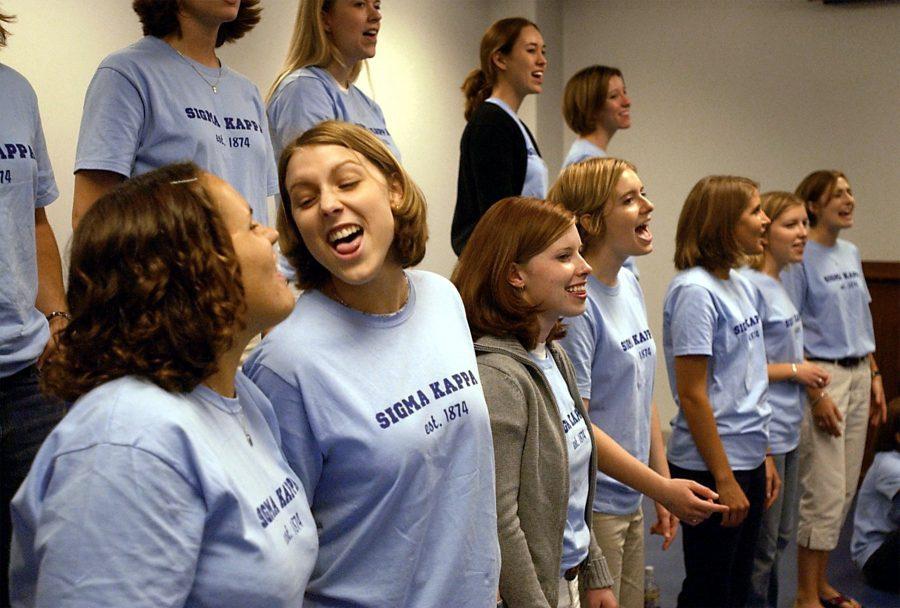 Recruitment Week: it’s stressful, fun and exciting. However, there is something else that is oddly familiar about it.

Between all of the yelling, chanting, crying and matching outfits, it’s no wonder I was having flashbacks to my high school cheerleading tryouts.

On the first day of recruitment, my GRC gave to me… a white t-shirt that matched everyone else’s. Now, I don’t know how many people have actually ever tried out for their high school cheerleading team, but if you did, you probably remember the dreaded white t-shirt.

During the first day of recruitment, looking around at all of the girls who were dressed identically, I could not help but feel as if we were once again competing for the coveted spots on the varsity cheerleading team.

The next similar aspect was the chanting. When I arrived at my first party, I really did not expect the people yelling in my face. It was loud, energetic and totally surprising. In fact, I jumped when I first heard the ones that were so similar to the chants heard at a home football game.

Much like a tryout week, I could not sleep after the first night of recruitment. Try as I might, the chants kept replaying in my head, over and over. “Chi O! Red hot,” the perfect spelling of Delta Zeta, and “all the best go ADPi” kept me awake.

During recruitment, there were many tears — both good and bad — that were shed. This is another similarity between high school cheerleading tryouts and recruitment; all of the estrogen that filled the rooms combined to create an emotion-filled weekend. I remember crying during almost every one of my high school tryouts, either from stress or from the joy that the week was over. If you want to stress out a teenage girl, put her through cheerleading tryouts… or recruitment. They are basically the same thing.

Although there are many similarities between high school cheerleading tryouts and sorority recruitment, the best is the overwhelming sense of pride felt at the end.

Whether that be pride for the school you are representing, or pride for the sisters you now get to share, both experiences tend to leave you happy that it is over, but nonetheless thankful it happened.