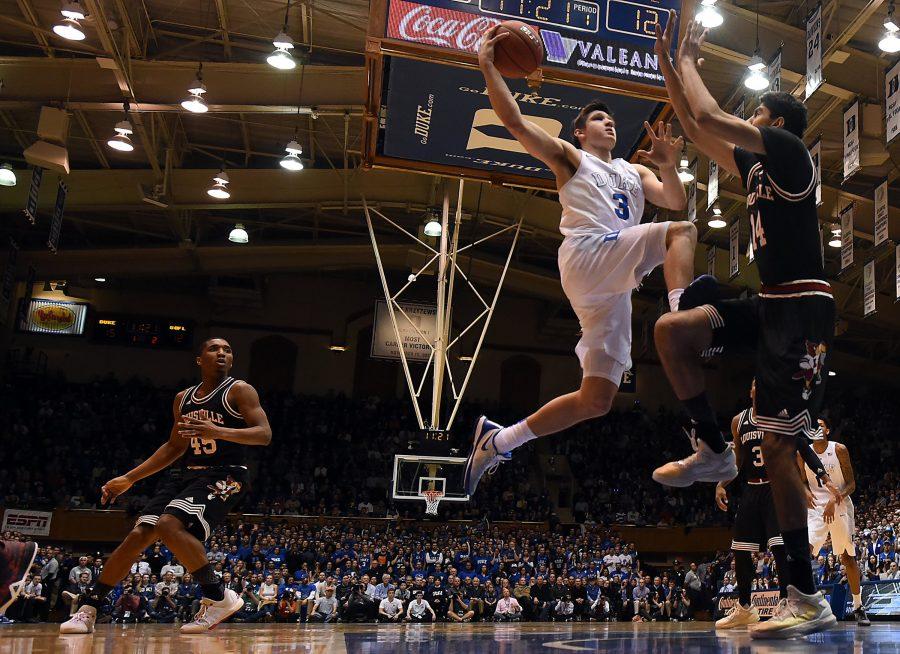 This past Saturday, Jan. 14, the ACC Conference play was even more electric than usual.

The schedule treated hoops fans to two top-15 matchups that pitted the upper echelon of the best conference in the land against eachother. Duke versus Louisville and North Carolina versus Florida State were both exciting in their own way.

Duke-Louisville was just as exciting for the off court antics of both programs as it was for the on court action. Both schools have had their fair share of distractions over the past season, whether it be Louisville’s former graduate assistant Andre McGee’s recruiting violations or the tripping situation revolving Grayson Allen that no one can seem to get enough of.

However, both teams blocked out the noise and left it all on the court last Saturday in Louisville, as the Cards ultimately took down the Coach K-less Blue Devils by a final score of 78-69.

Louisville’s balanced offensive attack was led by Anas Mahmoud who put in 17 points for the Cards while guard Donovan Mitchell added 15 points en route to the victory.

The Blue Devils were led by Allen who contributed 23 points and sophomore sensation Luke Kennard with 17 in the losing effort.

North Carolina versus Florida State had Chapel Hill filled with a palpable buzz all day leading up to tip off. In what was a back-and-forth affair in the first half, North Carolina pulled away as the ‘Noles never got it clicking down the stretch and the Tarheels ultimately won by a final score of 96-83.

Florida State saw productive output from guard Dwayne Bacon and freshman-sensation Jonathan Issac who put up 18 and 17 points respectively in the loss.

Some games to look forward to this next week include Louisville at Florida State this Saturday, Jan. 21, at 2 p.m. in Tallahassee and Virginia at Notre Dame this Tuesday night, Jan. 17, in South Bend.

In the Louisville versus Florida State game, watch for a stout defensive battle as two of the ACC’s most physical teams matchup. In what is set up to be a low scoring game, look for Florida State’s trio of Xavier Rathan-Mayes, Bacon and Issac to try and cause havoc to the Louisville backcourt that is without point guard Quentin Snider due to injury. This puts even more of a burden on star shooting guard Mitchell. The matchup in the paint between Louisville’s Mahmoud and Mangok Mathiang and Florida State’s Michael Ojo is one to keep your eyes out for.

The matchup between Virginia and Notre Dame will be one as they are two teams with very contrasting styles of play. While the Cavaliers will try and slow the game down and keep it low scoring—through the hard nosed defense of London Perrentes and Marial Shayok—Notre Dame’s Matt Farrell will look to facilitate the high-powered Notre Dame offense by shooting the ball well from the perimeter and finding his open teammates.