Demon Deacons move to 10-7 on the year 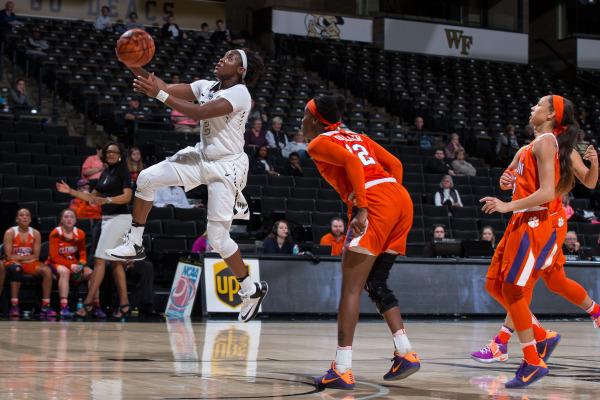 The Wake Forest Women’s basketball team faced off against the Clemson Tigers earlier this week at home, defeating them 68-56, marking their first ACC victory of the season.

The Deacs started hot by gaining a 14-point lead in the first seven minutes of regulation. Elisa Penna and Amber Campbell were critical offensive players while Alex Sharp played stellar defense having rebounds crucial to their success. The Deacs’ turnovers were limited and shots were going in. The Deacs led in points in the paint as well as second-chance points.

In the second quarter, the lead grew even more, reaching as high as 20 points with 1:10 left. Wake Forest again led in points in the paint and fast breaks.

The Deacs had 11 total rebounds in the second quarter, while the Tigers only had four.

This made a difference in the game and lit a spark that carried over into the second half. Clemson’s Aliyah Collier led the Tigers in total rebounds, assists, and tied for having one steal. Victoria Cardaci led the Clemson Tigers in scoring in the second quarter with nine total points.

The first half was monumental for Wake Forest’s Amber Campbell, scoring her 1,000th point for the Deacons.

Clemson outscored the Deacs 12 to eight in the paint. In the third and fourth quarter, the Tigers stepped up their game and had more total rebounds than Wake Forest.

The Clemson Tigers ended with more total rebounds than the Deacs. However, Wake Forest beat them in assists, had fewer turnovers, blocks and steals.

When the Deacs took on the No. 17 Virginia Tech Hokies, they fell short by two points, the final score being 72-70.

Milan Quinn had a double-double, while Amber Campbell was the high scorer finishing with 22 points.

The first quarter was successful for the Deacs because they had five points off of turnovers quickly. However, Wake led in rebounds, assists, steals, and had fewer turnovers. At the end of the game, VT had led in points in the paint 40 to 26 and fast break points 18 to two. Wake Forest’s largest lead was by 13 in the 2 nd quarter, but it quickly turned at the half.

The final score, 72-70, was impressive for the Deacs because VT was ranked and they kept up.

The next game is Thursday, Jan. 19 at UNC-Chapel Hill at 7pm.